Newport Mall was an integral part of my formative High School years. As a young High School student at the nearby McNair Academic High School, the mall was my destressor. Each Friday I would frequent the Food Court with my friend Gekson with a modest budget of $20. It was my time to goof around and enjoy my newfound freedom of hanging out late with friends. Gekson and I would make a few rounds around the Food Court to start things off, collecting free food samples from virtually every restaurant we could. Then we would find a table, grab food, and not move for hours. We’d talk about girls, teachers we disliked, and worry about our unwritten future. I remember the sounds the most: scraping chairs, shuffling feet, and laughter.

Let’s Fast Forward to Friday January 11th, 2019. Here Gekson and I were on the same Newport Food Court of our High School Days. We were both already a Semester deep in college with a new outlook on life, ready to write our future. We settled down to grab some food while Gekson’s Twin Brother Quinton was at Zumiez checking in on Co-Workers. Gekson and I had not even sat a couple of minutes when we noticed a teenager after teenager speed walking away from the Taco Bell and pass by where we were sitting by Sarku. Loud voices and screaming drew our attention to the area these people were skirting away from. Chairs began to fly through the air and a large horde of people were thrown together. My eyes observed a teenage fist fight, which wasn’t uncommon at Newport Mall on a Friday but my ears heard the unmistakable sound of a Gunshot. BOOM.  People began to run for the escalators, but I was frozen in my tracks. I was frozen because this was a place I had been conditioned to associate with happiness, and this situation threw me off completely. I remember the sounds the most: screaming, the cries of a baby, and my heart hammering in my chest.

After the second gunshot, Gekson and I came to our senses and ran for the escalators. On our way passed the AMC Movie Theater and Subway, we saw an overturned stroller and a struggling Mother. Gekson and I immediately stopped to help her, but on our way down from the Third Floor to the Second, I lost sight of him. Nothing adds to an already stressful situation than losing a close friend. I stopped on the Second Floor despite hordes of people bumping into me and my body telling me to run for cover. Gekson finally appeared behind a group of other terrified shoppers, we immediately grabbed each other and made a beeline for the escalator. My legs were starting to give out and I felt oddly numb. There was no way this was happening to us. We ran straight to Zumiez, but there was a gate over the entrance. In fact, each and every store in the Mall had shut their gates and rushed customers to the back exits and storage rooms. The Mall looked deserted, yet there were so many of us gasping for help. A few seconds into asking for someone to open the Gate, Levi (a Zumiez Employee and friend of Quinton) opened the gate and consoled us with his words, “Don’t worry, there was no way I was leaving you guys out here.” 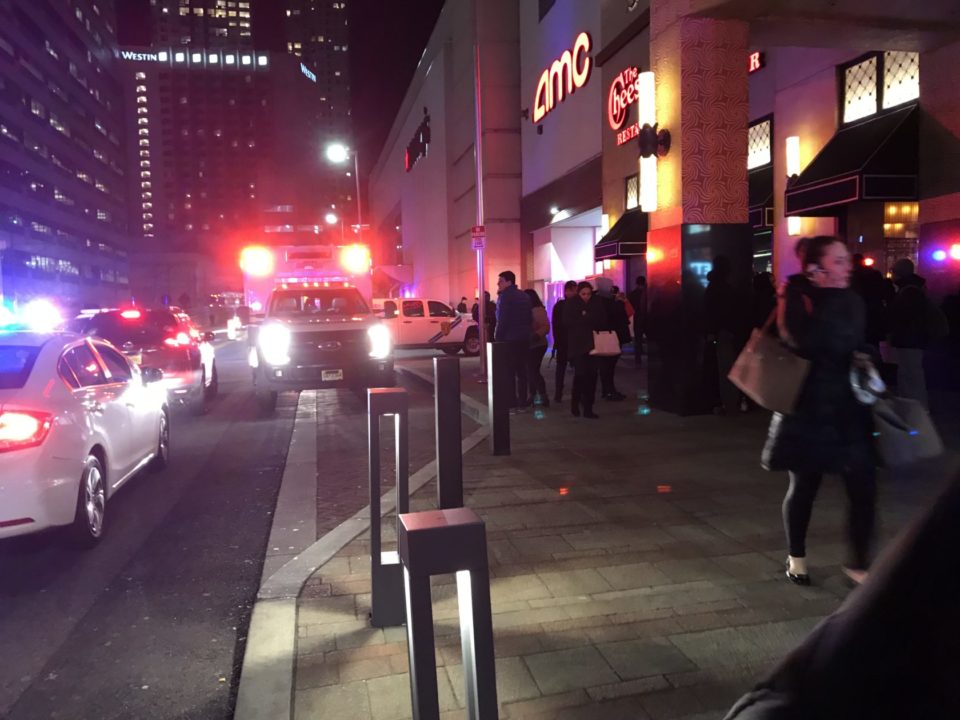 Once safe inside the Storage room of the Zumiez,  Gekson embraced his Brother Quinton. Several Zumiez Employees, my two friends, a Mother with two children, and myself were jammed together, waiting for the Jersey City Police Department. I whipped out my phone and sent out a Tweet, ensuring that everyone knew to stay away from Newport Mall. At this point, we weren’t sure if this was a Mass Shooter or a Target Shooter, but what my friends and I did know was that our Mothers would be freaking out. There is no easy way of telling your Mother exactly what situation I was in. I started by evening my breathing and ensuring her that I was absolutely fine but there was a small shooting at Newport Mall. I was fine. I repeated that multiple times until it started comforting me. After hanging up, I realized I was in a dark bathroom with absolute strangers. These strangers happened to be two little children, Out of the pair, the younger girl was clearly in shock, and her not much older Brother took her in his arms and ensure her everything was going to be okay. But was it?

Gekson, Quinton, and I had come a long way since High School. The Three of us along with a few of our other friends organized Jersey City’s March For Our Lives which was initiated as a response to the lack of legislative action in wake of the shooting in Parkland, Florida. Our March had an estimated 3,000 people in attendance. We gave speeches in front of the crowd and really amped people up. Everything on the day of the March made it seem like things were actually going to change. Little did I know that I’d be crammed in the narrow Zumiez storage area, wondering if the shooting had stopped, and if anyone was going to come for us. 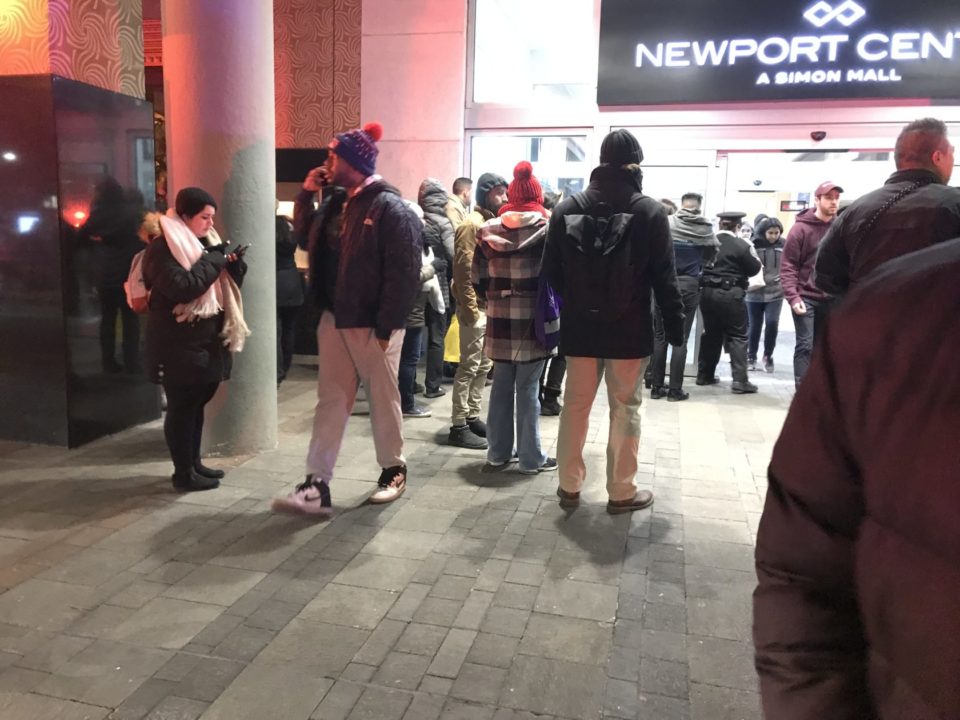 After about 20 minutes of waiting, the Zumiez gate was opened to let the Mother and her children out because their ride had arrived. The minute the gate was opened, we were met by the screaming voices of Mall Security and hordes of terrified people still running for the exit. It was almost as though the shooting had just started, why couldn’t we leave yet? Gekson and I ran outside to escort the Mother’s stroller near the Mall Exit, which is around the time I decided to turn on my Camera. I was calm enough to realize that people need to see the aftermath of just two gunshots. Just two. Compared to the 150 rounds shot in the Connecticut Newtown Massacre. Once we got her halfway to the exit, we turned back and ran straight for our hiding spot in Zumiez. This time there was more screaming and more talks of shutting down the gate. I didn’t know what to do. I was still numb and my head was pounding. I pulled out my phone and texted my friends who were flooding my Social Media Apps making sure I was okay. I just kept staring at the texts, and didn’t want to reply until I was safe at home. After about 30 minutes, we were let out by the JCPD, and we ran for the Mall Exit. We kept running until we were by the Westin. There was a guy outside enjoying a cigarette. The Bar was packed with people having a good time. They had no idea what we just experienced. I didn’t even know if it made the News yet, but now I was getting angry. Why did someone have a gun at Newport Mall? Why did they decide to shoot it at a place where younger children and families frequented? All the work we put in to deter gun violence led to us witnessing it? Gekson’s Mom picked us up from the Westin, and we made our way to home. I rested my face against the cool glass window, and organized my mind.

I started by Tweeting out the video of us running towards the exit and witnessing hysteria. I then dared people on Twitter to tell me that it was too soon to talk about Gun Violence, which is usually what Conservatives urge. I needed people to experience not the Gun Shots, but the aftermath of them. The chaos they unleashed. I have worked tirelessly with Everytown for Gun Safety and Students Demand Action Hudson County for something like this to happen in a public venue. But I also began thinking about the little children and staff slaughtered at Newtown.

They had to go through a worse experience than I did. They saw friends die, teachers die protecting them, and heard the sound of deafening gun shots. For 26 of them, that was the last thing they experienced on this Earth. Their lives were clipped way too short by a deranged individual with a weapon designed to take out multiple individuals. Thinking of Newtown made me think of my younger sister, Maya who is also involved with the work I do. But what if I was there with her on Friday instead of my peers? What would it be like being responsible for another individual in a time of crisis? Newport Mall was once a place associated with happiness and good memories. Now I am unsure if I will ever visit the Mall again.

After reading the reports and realizing that this shooting was Gang Affiliated, I am willing to bet that the gun used was untraceable and highly illegal. This raises an interesting dilemma for the movement I am apart of, and New Jersey as a whole. What do we do when our strong Gun Laws are null and void due to the use of an illegal gun? Conservatives might step back and pat themselves on the back when they see an instance like this, however it only strengthens the argument that guns need to be regulated stronger NATIONALLY. Just because New Jersey has strong Gun Laws does not ebb the flow of illegal guns from surrounding states like Pennsylvania, Virginia, and Ohio. Every State must crackdown on ghost guns and illegal guns making their ways into the hands of unsafe individuals like the one from Friday night. This is an issue that isn’t going away anytime soon, and it’s time to act.

This shooting was Gang Affiliated but before we jump down on the 25 – Life Bandwagon, let’s think for a moment. Gangs are running entire neighborhoods and cities nationwide. Arresting every Gang Member won’t solve the issue, just like eradicating every Klansman won’t eradicate the ideal of White Supremacy. We are fighting a culture and history of systemic issues that were left unaddressed. This led to the formation of Gangs that claim the lives of rival members and innocent bystanders in Chicago, Newark, New York, and our very own Jersey City. The “Gangster” should be reprimanded, but the larger issue is where and how they got the firearm. We cannot be a society that screams for this individual to face life in prison, but then turn around and idolize Don Corleone, Tony Montana, and the Sopranos. This is a culture that we need to combat by inventing a new and safer one, for the sake of America’s Future.

If you want to join the Movement to avoid incidents like the 2019 Newport Mall Shooting, please visit Everytown.org, join the local Jersey City and/or Hoboken Moms Demand Action for Gun Sense in America Chapter, and the local Hudson County Students Demand Action Chapter (@SDAHUDSONCOUNTY). If you were also at the Mall or have witnessed/been in a shooting and need someone to talk to, visit the Everytown Survivor Network. We are alway here to help. Join us to help ensure that Schools, Colleges, Movie Theaters, Places of Faith, and Malls are safe for America’s Future for years to come. We cannot do it alone. Stay Safe Everyone.