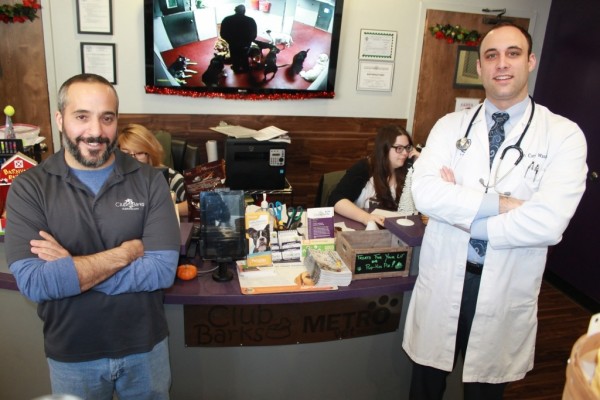 Club Barks is a local resort for your fur babies!! It’s a one stop shop for all your pets needs; grooming, daycare, boarding and now they also have an in-house vet. They recently invited me over for a tour at their downtown Jersey City location and I got to sit with Club Barks owner Stephen and MetroVet owner Dr. Cory to get the background scoop on this doggy haven.

The dogs looked so happy and well taken care of, the facilities were so clean you could eat a bone off the floor! 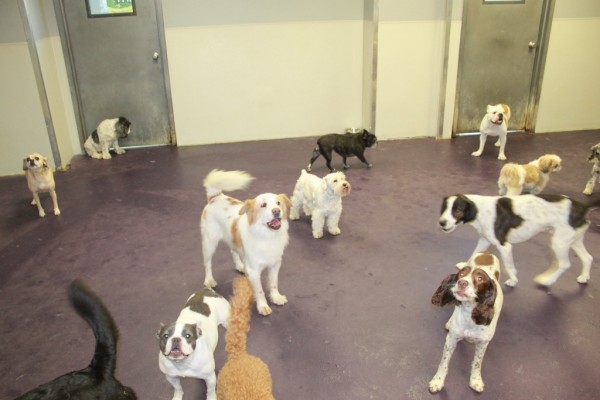 Club Barks is doing doggy Christmas pictures on December 6th . It’s a $10 donation to the Hudson Animal Facility for adoption!

What are your names?

I am Dr. Cory Waxman. 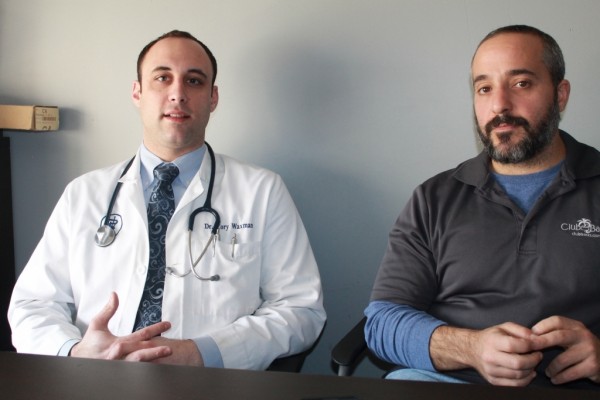 And what do you guys do?

And what about you?

Cory: I run Metrovet here, I’m a veterinarian. I own and operate and we just opened a couple months ago.

So how did it start?

Stephen: Ten years ago, we opened our first facility in Woodland Park, New Jersey; we’ve expanded to Jersey City, Hoboken, looking to turn it into a chain of ten stores over the next five years. 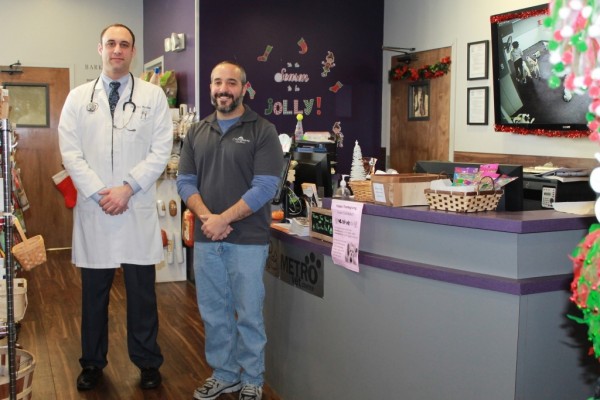 So where did the idea come from?

We’re animal lovers. In the family it was my sister and I and my wife running the business. We moved on and my sister ended up moving to Pennsylvania and separated from the business and now it’s me running it and my wife will eventually come on full-time when it turns into a multiple store chain.

Can you breakdown what you guys offer here? 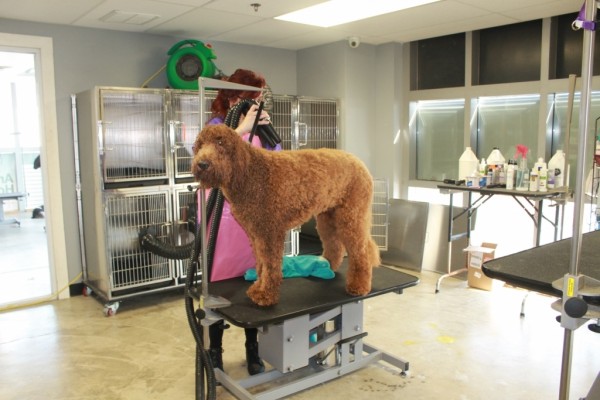 What makes you guys different from any other business?

We’re actually the most affordable pricing within the area. We’ve kept our pricing consistent. As we build our chains you’ll be able to use any of our stores for your services meaning if you go to the Hoboken store you can use your daycare package there, doesn’t matter where you purchase it. Grooming it’s the same groomers that actually operate in each of the locations so you can always get one of the groomers that you like and follow them. It’s the affordable pricing that keeps us in the game.

How does the housing work? We also do cats. Cats are a little bit different than dogs, cats don’t socialize, you have to keep them separate in their own little condo, whereas dogs are social. So you drop your dog off on the day you are leaving on your trip or the day before, you bring their belongings, you give us your instructions, we feed twice a day (sometimes three times if the owner wants it three times), they’re put in cages at night, but in the daytime they’re in the daycare environment. 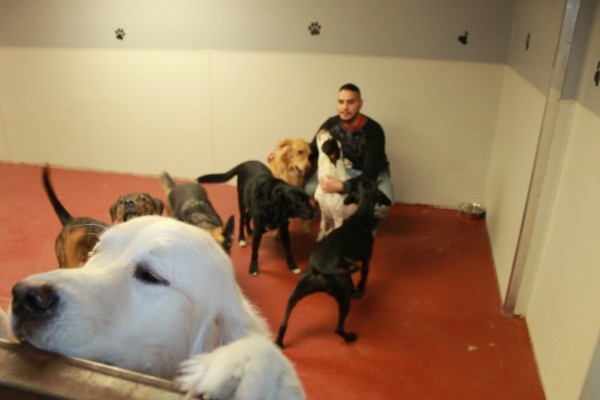 Did you recently join (to Cory)?

Cory: Yes, so I was with another practice and then I went ahead and joined steve here. Basically he gave me a call, he said he has a vacant hospical. We knew each other from before because he was working with the doctor I was working for and then I came, took a look at the place, and decided “Yeah, I can definitely make this work.”

How long have you been a vet? 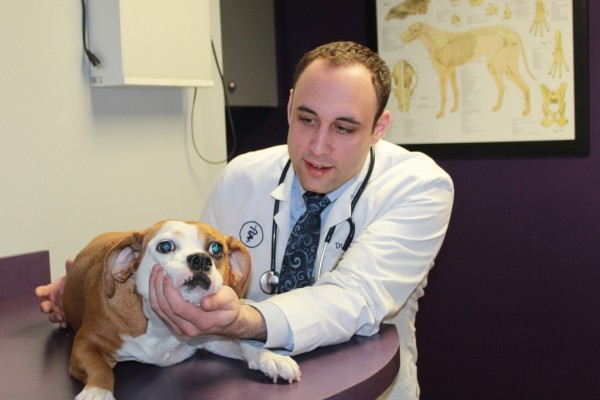 How did you get into it?

Well, I was doing a lot of different things in college and in high school, I was working at vets, I was actually doing conservation work, I worked at a zoo with giraffes and lions. I was doing research for the same effect basically for endangered species. I was working on creating an egg bank in order to preserve the eggs for future generations in case they ever become [extinct].

It was pretty cool, it actually was a very worthwhile project it was just a lot of time under the microscope and I like to have that person to person interaction and so I wound up going more towards general practice.

Do you guys both have pets?

Stephen: It actually started—I have a cleaning lady coming every two weeks and I had to get my dogs out of the house, that’s how I started going to a daycare. 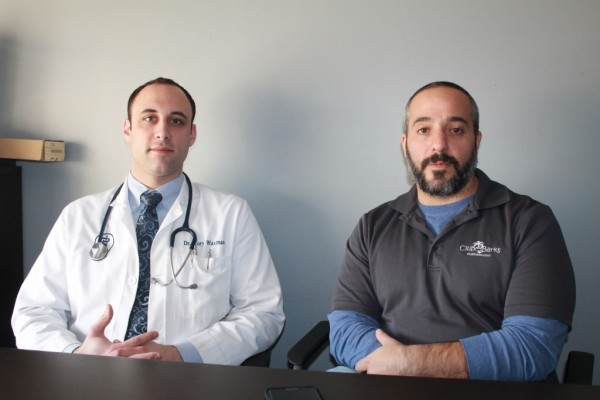 What pets do you guys have?

Cory: I have four cats and three dogs.

Stephen: I have two Boston terriers and a French bulldog.

And so what goes on during the day with the dogs? What do they do?

Stephen: They’re in groups socialized, there’s a person in the playpen monitoring and basically they’re let to play. It’s basically a dog park without the humans.

Cory: If there [are] any issues with the clients they can always come see us, if there’s any issue in the daycare we take care of them. So it’s kind of an all in one. 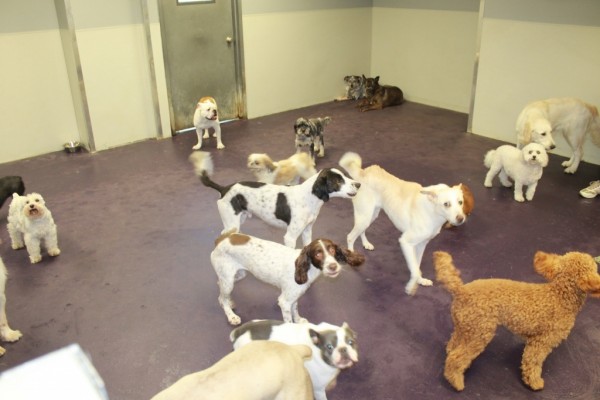 Do you take care of all pets?

I do dogs and cats, and I do guinea pigs and rabbits as well.

Cory: I don’t do birds or reptiles. 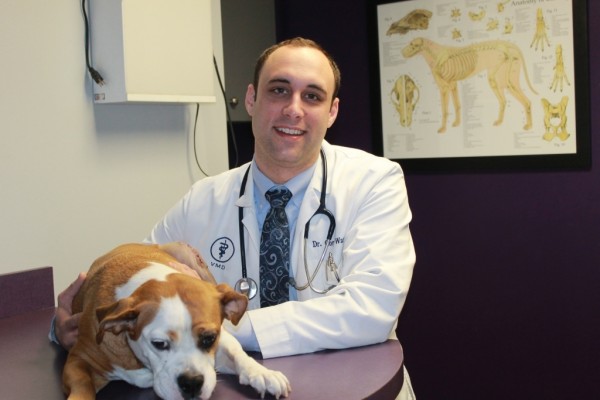 So how did this marriage come about?

Cory: Well basically, we knew each other from before because he was working with a doctor I had worked for and we had actually been talking about it beforehand when there was another doctor here. Stephen gave me a call and said “Hey, we have a vacant hospital, you would be great,” and I came and looked at it and that was it.

It just makes sense, all in one. You guys do everything.

Stephen: It does. All in one service. One-stop-shop.

Anything else we didn’t cover?

Cory: Some people don’t realize, but we are actually a full-service hospital. We do all the surgeries, we do vaccines, we do bloodwork, x-rays, we have everything here. 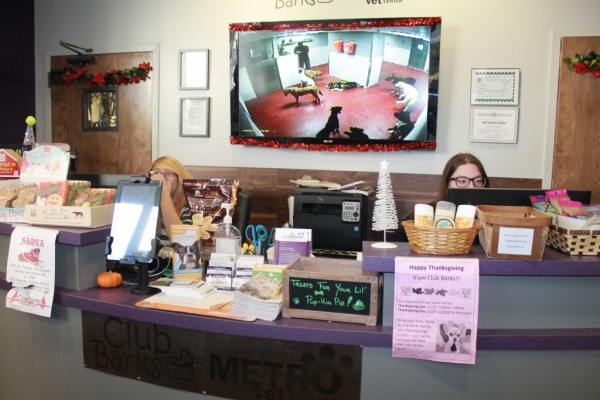 What happens in an emergency situation?

Yeah, so we do take appointments by schedule or walk-in, and if there’s an emergency then they get priority.

What if it’s in the middle of the night?

Cory: So we’re not open at night.

Stephen: But we are open on Sundays which is a really big plus in this neighborhood. He’s the only vet that’s actually open on a Sunday— 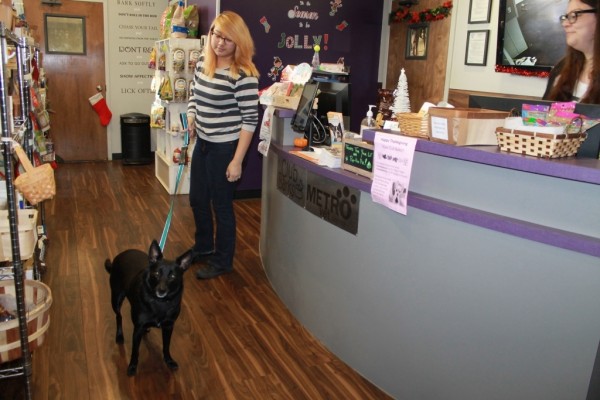 What is the most common thing that happens? They eat stuff their not supposed to?

Stephen: A lot of dogs eating stuff that they shouldn’t.

What are tips to keep your pet healthy? 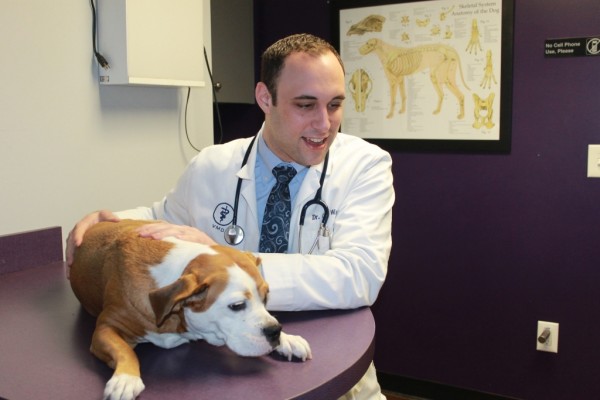 Cory: Yup, make sure they can’t get into anything that they don’t chew on any wires, cats love to do that. And then when you’re walking them, dog, you want to make sure that they’re not picking anything off the sidewalk because there’s a lot of things they can pick up that can be really bad for them. Another thing is just making sure that they’re up-to-date on their vaccines.

Stephen: Although we’re in an urban area there are still ticks and fleas.

Stephen: Like here with the river ,a lot of people go over to the peninsula and they use that area and let the dogs swim in the river. Horrible, horrible river water. 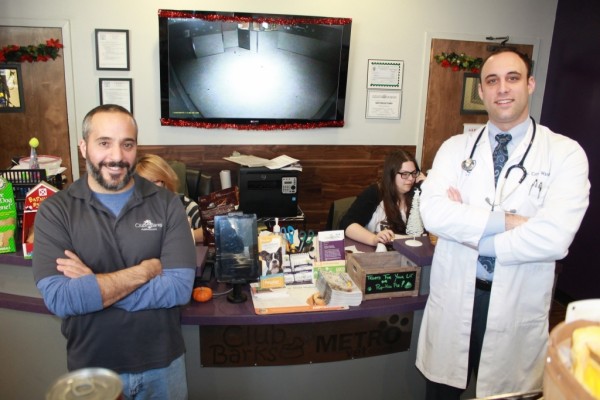 Cory: Yup, we do see a lot of that. And then just selecting a good diet for them, making sure they have an appropriate diet, if they’re an active animal you want high protein, you want to make sure it’s a high quality diet and not something that’s just low priced, out of the bargain bin.

Do you guys do any dog walking?

Stephen: We do not. We want to leave that to the dog walkers.

Cory: We work with them too, they come in, they drop the dogs off sometimes, and then they’ll pick the dog up. 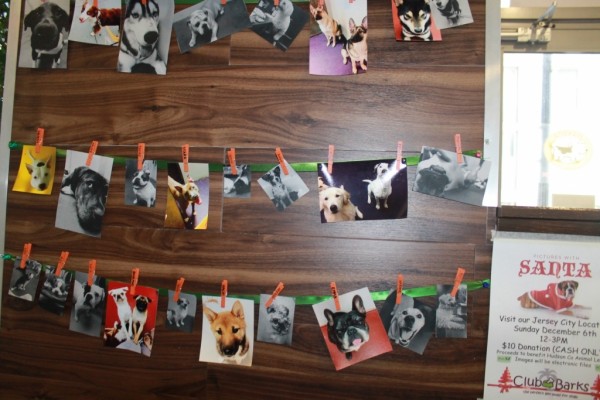 Do people do doggy daycare every day?

Stephen: We have a few, I don’t suggest it because when you’re putting your dog in a doggy daycare they’re stressing themselves out and they’re just being very active. It’s like going to the gym seven days a week. What I suggest to people is do two to three days a week, don’t go crazy, use a dog walker the other days.

Because they maybe just want the dog to socialize basically and not be alone?

It’s more about the people who have hyperactive dogs and dogs that do damage to their apartment. You can’t leave that in a condo and have a dog barking all day long or they’ll eat through the walls, or they’ll eat your cabinets, so they want to get them out of the house.

Or your really expensive shoes.

Cory: Well then they come to me.

Now with the grooming is it the basic cutting hair, washing the dog? Do people have funny requests?

Stephen: We’ve done a bunch of hair coloring, we’ve done show cuts, but your most volume here is baths because people don’t want wash their own dog, plus you have a nice tub, you don’t want to throw your dog in the tub. 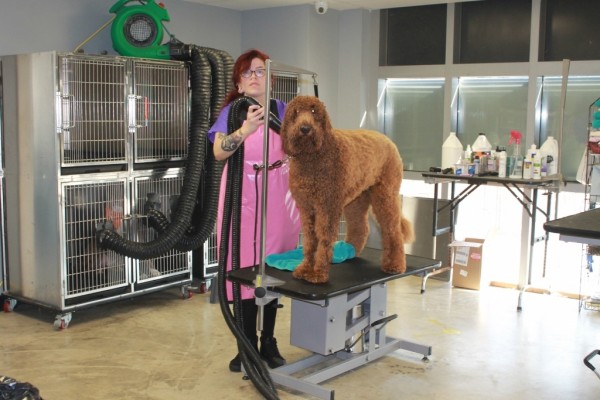 So how does membership work?

Do you guys have a favorite Jersey City hangout spot?

Stephen: We’ve done Amanda’s which is really nice. The Kitchen is actually a really good place.

Cory: I’m still pretty new to the area because we just opened in September, so I haven’t had a whole lot of chance to explore it. 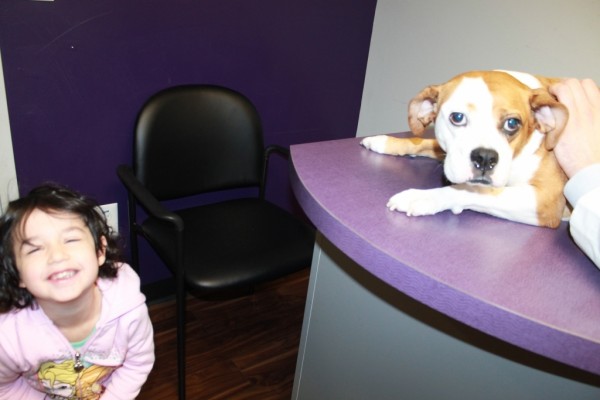 Stephen: We have another location coming in Senate Place at some point. So we’re putting a small doggy daycare grooming center, kind of like our Hoboken store.

Cory: I think what kind of sets us apart as a vet in this area is that I’m the owner/operator so every time that somebody comes in here they’re going see me. I’ve heard from clients that it’s hard at pother places to see the same vet twice because they rotate quite a bit. So that’s one of the major advantages of coming to see me because it’s always going be me and we develop a nice client-patient relationship.

Hours subject to change on holidays.