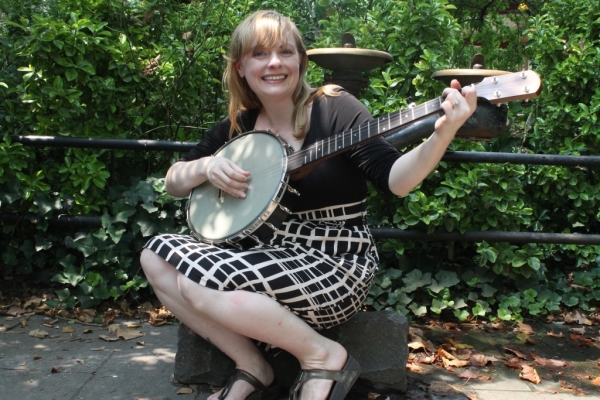 These days the music industry is so saturated with female artists that sing club anthems, are auto-tuned, wear body suits, and sing about things normal people can’t really relate to… I love Rihanna, but who is this girl that owes you money?! and why are you singing about her? Anyway, I digress. I love pop music and the club anthems, don’t get me wrong but they don’t insight any feelings and emotions like an old Beatle song does (unless it’s after a few drinks).

I heard about Carolyn Light a few months ago and that she is having an album release party September 18th at Art House. I wanted to learn more about her, and get her to sing a tune for me. We met at Van Vorst Park on a hot summer day. 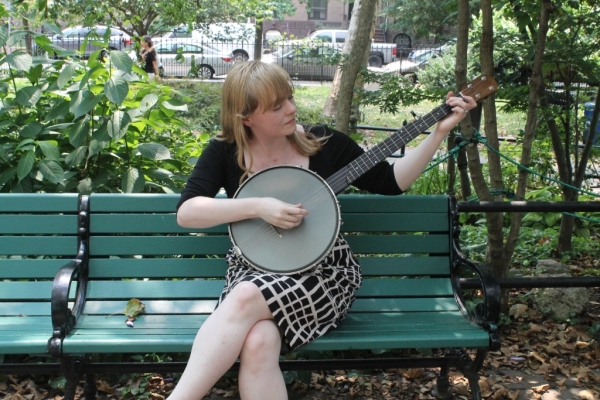 She was sitting on a bench with her Banjo, the sun shining on her golden hair… I swear it was a scene out of a movie. Her name is so fitting for her, she is such a positive and happy human being. It’s interesting, because that morning before meeting her I was feeling drained and had one of those “why am I doing this?” moment, and as soon as we sat down to talk, I got my answer. I do this because I get to meet inspiring and beautiful people like Carolyn.

I asked her to sing for me. Carolyn sang accappela, no instruments, no auto-tune, no body suits just her beautiful voice. It was absolutely wonderful. You need her music in your life. 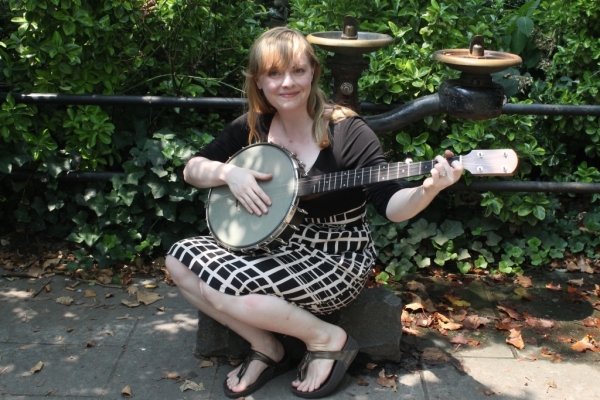 What do you do? I’m a singer, songwriter.

Can you define your style of music? I call it New Appalachian.

Wow. Never heard of that, what does that mean? That’s ‘cause I made it up. So I’m definitely in the Indie Folk genre, but the reason I call it “New Appalachian” is I like to reach back in time, especially to like influence from those ancient dirges and try and modernize them. I have a jazz guitar player who plays on stuff with me too so I have a lot of genre mixing, but my influence is really like reach-back-in-time, write melody lines that are like people used to write in the 16th century and stuff like that. So that’s why I call it New Appalachian, I take a lot of influence from Appalachian sounds, I really like old things. I like old clockwork and old buildings and old things.

How long have you been writing and singing? I’ve been singing my whole life, I started writing in 2011 is when I found my voice as a songwriter. I had been doing classical singing before then and musical theater and things like that, eventually, I brought some of my original songs that I kept secret this whole time, to other people and they were like, “This is great, why don’t you do this?” It wasn’t until I got Jersey City support that I found the confidence to call myself a songwriter. 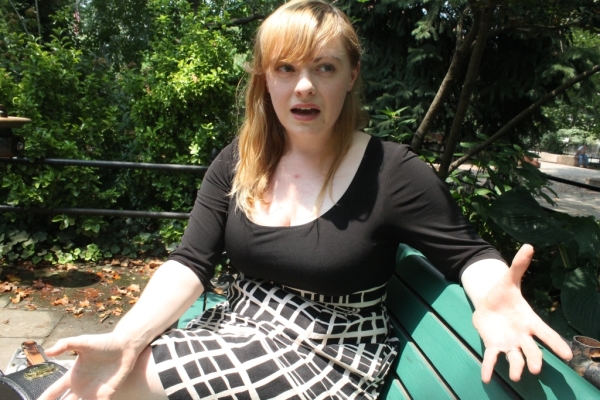 What are your musical influences? Simon and Garfunkel, Florence and the Machine, weird combo I know. I love her. I would say Allison Krauss is a big influence and again, those ancient dirges that have no name attached to them, those old gospels, those old sounding songs. Those are my primary ones off the top of my head.

What inspires you to write? It’s weird, usually, it just sort of happens for me, but a lot of my influences—so the album that I’m releasing called “Death and Whimsy,” and I’ve realized it’s because I write about painful stuff through this hopeful lens. I always do that, I don’t know why. So a lot of it’s inspired by fairytales, like the dark fairytales; I write about death a lot. Sometimes I write about my hopes and my fears and what I want and I often write about seeking creative freedom in my songs. And sometimes it can be a phrase; one of the locals Stephanie Thornton Bryant said something to me once that was so amazing that it became a song. 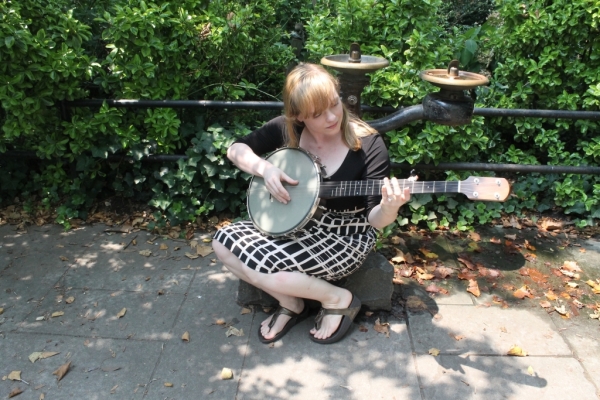 What was it? I told her that I didn’t know how to promote myself, I’m like, “I don’t know how to do that, I don’t know how to be that,” and she’s like, “Carolyn, you’re a mountain. Your presence is so big and that people realize when they’re standing next to you, it takes them a while to realize that you’re there, but then they see you and you’re a mountain.” I would’ve never thought to say something like that, that’s so poetic and it was such a sweet thing she said. It was so kind and generous of her to say something like that that I had to write a song about it and her because she’s definitely a mountain.

What are you working on right now? So right now, I am releasing my album in September and my album release party is going to be September 18th at Art House which we’re excited about with a lot of guest performers from the area. A lot of my favorite Jersey City musicians are going to be there.

Can you tell me who? Chrissy Roberts, Glen Coleman, Roland Ramos, David Ribyat, my friend Jimmy Lopez, he actually from Brooklyn, Cabaret Sauvignon is gonna be there doing a song with me. I’m excited to have everybody be a part of this. Soup Salad Sandwich is gonna be vending their delicious, delicious food. 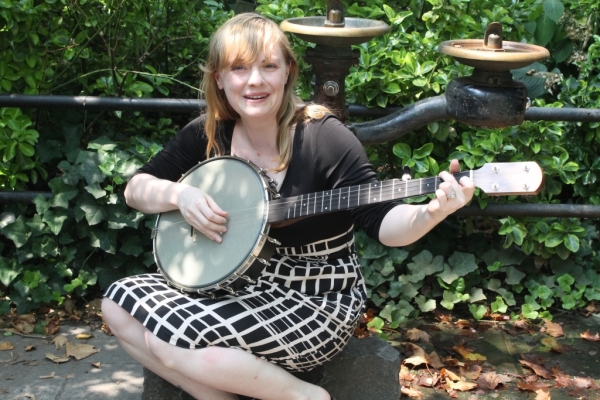 So tell me about the song you’re going to sing. I was actually considering singing you an acapella piece first, ‘cause that’s what I did first when I got here. The first piece, which is on the album, that I ever wrote and did publicly, was here and it’s a love song to the ocean.

In Van Vorst Park? No, in Jersey City. Jersey City sort of spawned that.

How long have you been in Jersey City? Five years.

What is your favorite Jersey City hangout spot? It depends on what mood I’m in because I love this park. That gazebo is where I had my birthday showcase last year, I love this park, but I also love Tea NJ, I also love LITM, it depends on what mood I’m in. If I’m in an earthy mood I came here, if I’m in a hang-out-with-the-girls mood I go to LITM, if I’m in a like coffee shop mood I got to Tea NJ, and also Honey Bakery in the Heights. It’s awesome, they’re really nice there, they put coffee ice cubes in your coffee.

I love Jersey City. I fell in love with it. When I first got here, I actually came because of my husband, he lived here and I was like, “Jersey City? What’s that?” I had no idea and I got here and the community here is just unbelievable, it’s unlike anything that I’ve ever seen and I love it. I love this place. 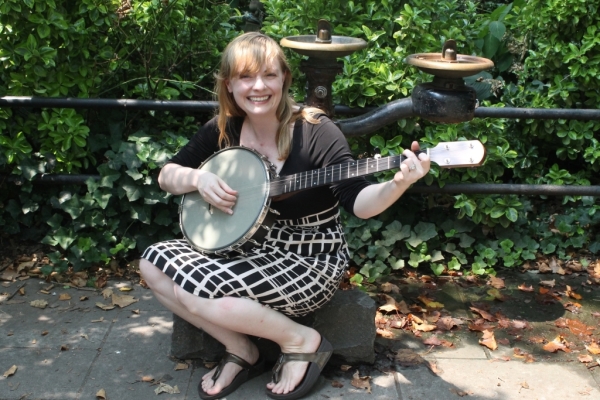 You are light, like your last name reflects who you are, it’s great. Luck of the draw I guess.

Anything else you’d like people to know about you or your music? Well, I think I write from a genuine place, I don’t write a lot of typical songs about typical things. The reason my voice is unique is because that’s where I express myself the best is in my music, I dig down and I pull out things that are painful, but I try to make them joyous. I think if you want to know me, getting to know my music tells you a lot about who I am and it’s going to be available soon. This album is going to be great; I have a lot of guest stars on it who are talented and I’m excited about it.

How can people get the album? I’m going to put it on Spotify, on iTunes, I’m going to have a direct download from my website.

What are your future plans? I am working on a concept album with Roland Ramos. So we are working on—fairytales again—a concept album based on a Norwegian fairytale, “East of the Sun, West of the Moon.” So once this release is over we’re going to start sinking our teeth into getting that out and do a winter release of that.