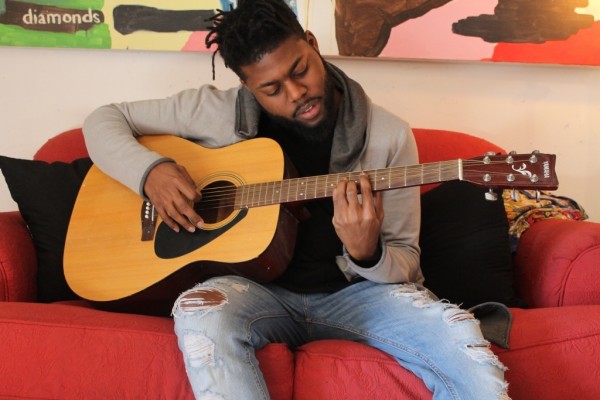 The past year, I’ve been getting many emails from local artists and musicians asking to be featured on the blog. As much as I would love to interview everyone it is virtually impossible. When Jase Harley emailed me, something inside of me said that I needed to meet him ASAP. He is also friends with stylish peep Denny who told me that Jase was extremely talented.

I went to meet him at his studio in Hoboken which is so well decorated and funky! Jase said the space was inspired by Andy Warhol’s “The Factory.” We sat down and had an awesome conversation, it didn’t really feel like an interview. It felt like a melding of minds. We discussed art, music, pop culture, fashion… basically everything we are both passionate about. Jase is awesome. 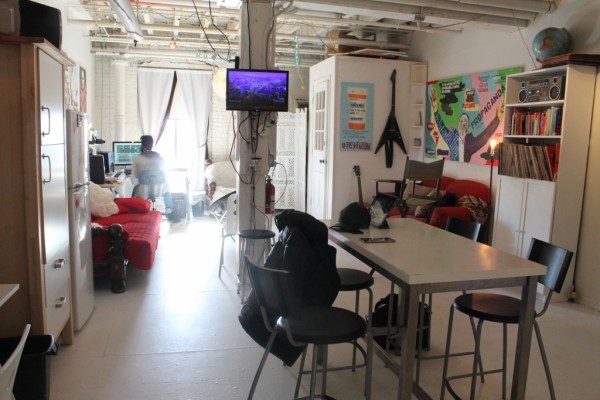 Jase then proceeded to do a live performance so I could film him. He makes his own beats and writes his own songs and he to create the beat live and at the same time. He rapped and sung while I shot his video. I was completely floored.

I posted clips on my snapchat (follow me! @chickpea30) and people where messaging from all over asking me who this guy was. As if he was some sort of international artist. To which I responded “He’s Jersey City.” I want to compare Jase to the big artists that make beats, rap, sing and do art but I don’t want to because he is going to be a superstar in his own right. He has to. Talent like his does not come often. I am excited to follow his journey and honored to have gotten to know him. Jase is dope!! Ok I think we can move on to the portion of the interview…. 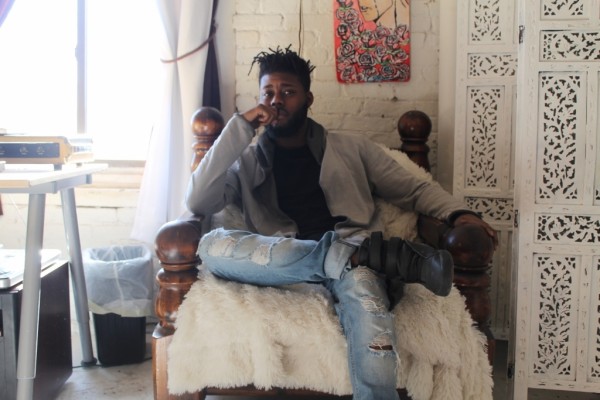 And what do you do? I’m a musician, I’m an artist, multimedia developer, but mainly I do music and art.

How long have you been doing it? I’ve been doing music for about fifteen years. I would say professionally for maybe about five or six years just really going hard at it, networking, trying to meet up with people. 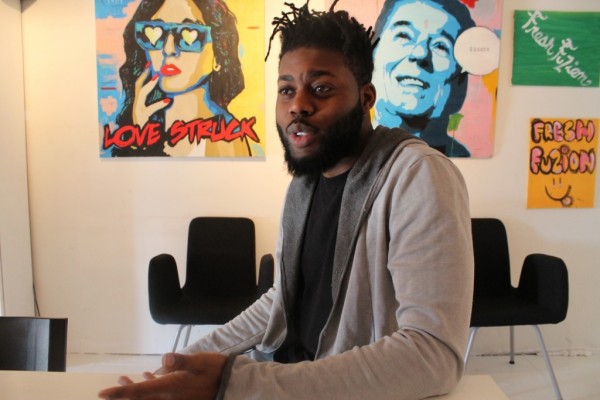 Have you performed anywhere? Oh yeah, I’ve done a ton of performances. I used to do shows out in Philly, I even had the mayor of Philadelphia come out to a couple of our events that we put together. Me and a team of guys that I used to really work with heavy because I’m from South Jersey so South Jersey is really Philly. So I used to do a lot of events out in Philly and then I moved up here. I went to college out this way. My family is also from out here, from Elizabeth so I kind of grew up between South Jersey and North Jersey, between Burlington, New Jersey, and Elizabeth. I’ve really grown accustomed to being back and forth. So I’ve done Arlene’s Grocery, I’ve performed at legendary dives; there are a handful of different places.

What are your musical influences? Musically I would say, I love indie rock, I love hip hop, [and] I listen to a lot of soundtrack music. I can name a bunch of people, but…

Yeah, I know, it’s a hard question. Tell me about your art. My art is just another expression of me, who I am. Same thing with my music—I don’t listen to a lot of other people’s music too much. I listen to certain songs, but I don’t listen to the new. With hip-hop, I don’t really listen to a lot of hip-hop artists because I don’t want to be influenced. I kind of just listen to things that aren’t hip hop and then try to take inspiration from that. Same thing goes for my artwork; I just want my art to be about my style. 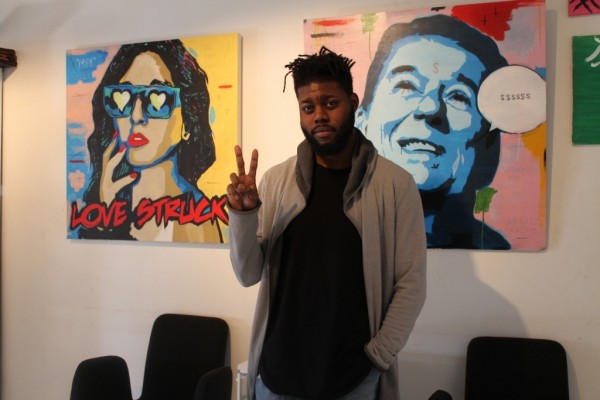 How long have you been living in Jersey City? Going on four years.

How did you get to Jersey City? Through my brother Sean Love, he’s out there. He’s a dope musician. So I stayed with him for a while and just worked on music and then I wound up getting a studio here.

What’s your favorite Jersey City hangout spot? Barcade used to be my favorite spot to really chill out because you see Mario Bros. right there. 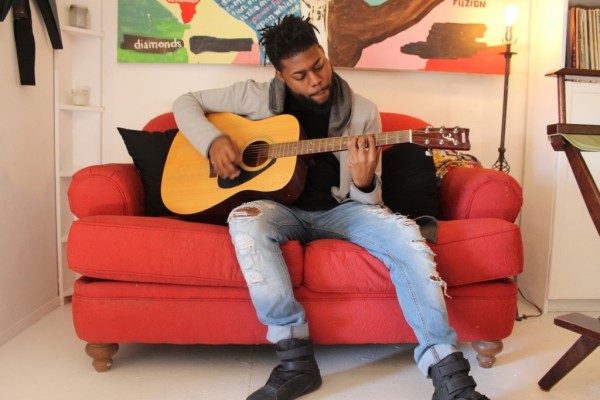 What’s your creative process? I sit down, make a beat. 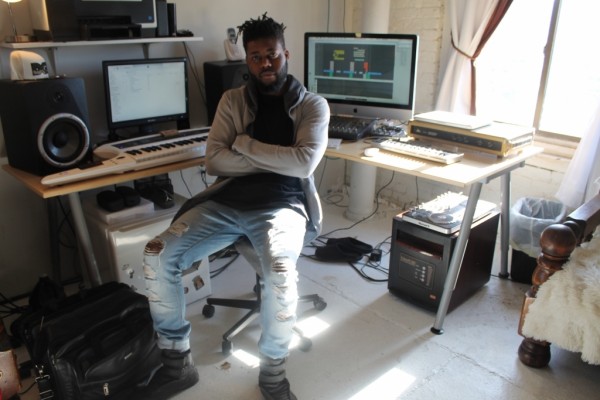 So you produce your own beats too? Oh yeah, I make my own music. I haven’t rapped or sang on a beat from anybody else in about ten years. So yeah, the first thing I make [is] the beat, go from scratch, and then if I like it, I’ll write to it. If I don’t like it, I’ll either sell it or give it away to somebody I know. Once I like that beat and it hits me here, and then I’m working on it for two, three days straight.

How do you know it’s original and not something you might have heard? Because luckily I don’t listen to anything else. One compliment that I’ve always gotten from people is that my music is very original. I might incorporate elements—you have to speak the language, this is what one of my mentors told me, Don Michael Jr., who pretty much, taught me everything I know about music ever since I was younger. I always want to go left field; I want to go too far left field to the point that it might not be understood by people. He said, “If somebody is German and you want to teach them English, you have to start off speaking to them in German. You can’t just go English; they’re never going to learn what it is that you’re doing.” For me, that was the biggest thing—“Let me incorporate the elements [and] let me familiarize the music, but still make it my own,” and that’s what I do now. 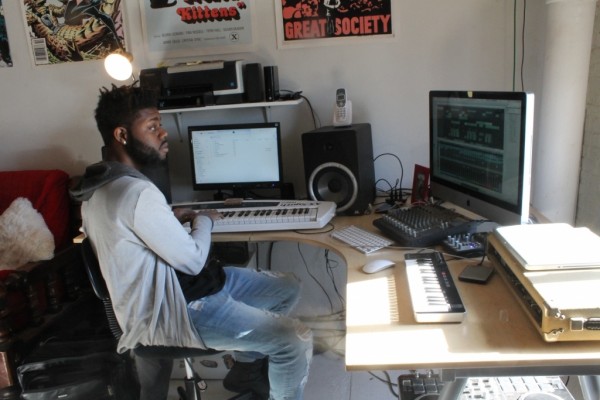 You’re also very stylish I noticed. How do you define your style? One of the things that influenced me was Andy Warhol and The Factory, that’s why I call this the Fresh Fusion Factory. 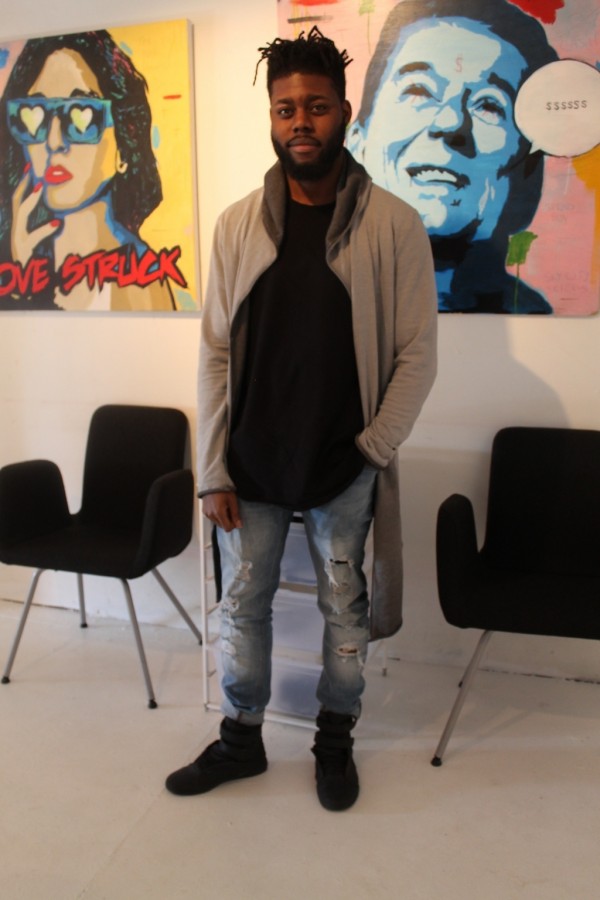 It does kind of look like it. It’s just the fact that he was constantly surrounded by great artists, great musicians, and actors, actresses—that’s the way it is in here.

It’s a great studio, I love it. Thank you.

Anything else you’d like people to know? One of my goals is not even just to do music because some people, they do music with the intention of being the next Jay-Z or Beyoncé, they want to be multibillionaires. That’s great if that happens, obviously, I’m not going to have a problem with that. My goal, number one is to affect positive change in the world. One of the things I want to do through my music and through eventually getting a large platform and some visibility is to start giving back and really contributing to society. I feel like the arts and music aren’t really on the top of the agenda. If a kid is young and they say, “I want to be an artist when they grow up,” like I did, people were like, “That’s not a career,” people go, “How do you make money doing that?” But if I said, I wanted to be a football player or a baseball player, they would work towards that, they would put me in training camps and everybody rallies behind you.

As an artist or a musician, nobody really rallies behind you until they really see—“Oh, he was on this magazine!” and even then it’s really rough. I still go around people and they [are] like, “Oh what are you doing?” “I’m a musician,” “You make money with that?” When it comes to the arts and the creative world, it just has a stigma and I feel like in this country [and] we don’t encourage it enough. For instance, when budgets get cut in schools, the arts and music are always the first programs to get cut, not the football team, it’s always the arts and music. I feel like the biggest issue is that there’s a correlation between grades and the arts and creativity. When students are involved in creative processes, their grades tend to be higher. By getting rid of that, you’re making a negative impact on younger generations. So one of the things I want to pursue is showing others that you can be a musician, you can be an artist and you can still make money off of it and you can still make a living at it and really just make an incentive to push the agenda. So giving back to society is one of the things I definitely want to do. 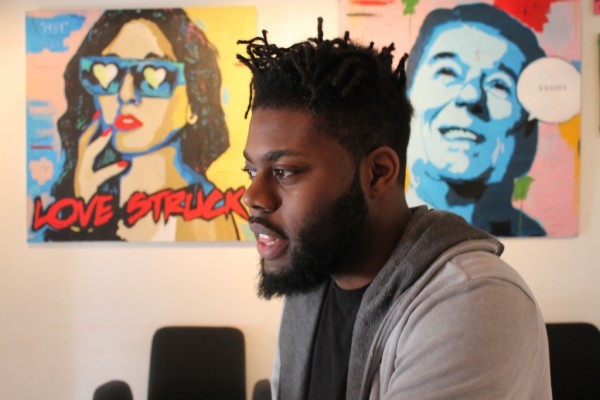 It’s so necessary. Maybe giving artists the tools and knowledge to become business owners so they can incorporate what they learn from a business perspective into their art because that’s just the world that we live in. You have to pay the bills. It’s true. There are ways to make money doing music and people just don’t pay any attention to it or they don’t think outside the box. One thing I did, I partnered with this group, Fractured Atlas, and they allow you to use their 501(c) (3) to accept donations.

That’s what makes people successful, when they’re open to other people’s ideas and working with people that they wouldn’t necessarily work with you learn a lot from each other. Exactly, absolutely.

Last words? I feel enlightened, I feel alive, [and] I feel awake. I feel blessed to be in the position that I am and my goal is to just help other through my gifts, through my abilities. I want people out there to just know, don’t give up no matter what anybody else says. No matter what they might tell you or to stop doing what you’re doing. Work and pursue it 24/7, give it your heart, give it your all, and give it your passion and don’t give up because I don’t feel like there’s enough people telling anybody out there. Not enough people told me to do that. Keep pursuing, no matter what.