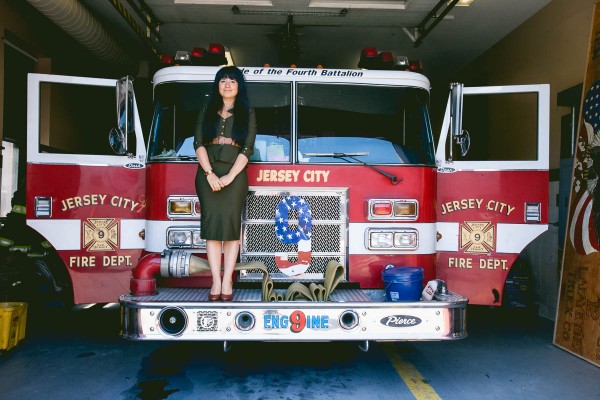 It is 12:02 am as I write this. In just a few hours marks the 13th anniversary of 9/11; A tragic event that will forever be on our minds and in our hearts. I want to dedicate this day; to the men and woman who protect us and risk their lives every day to  help others. You are my heroes. 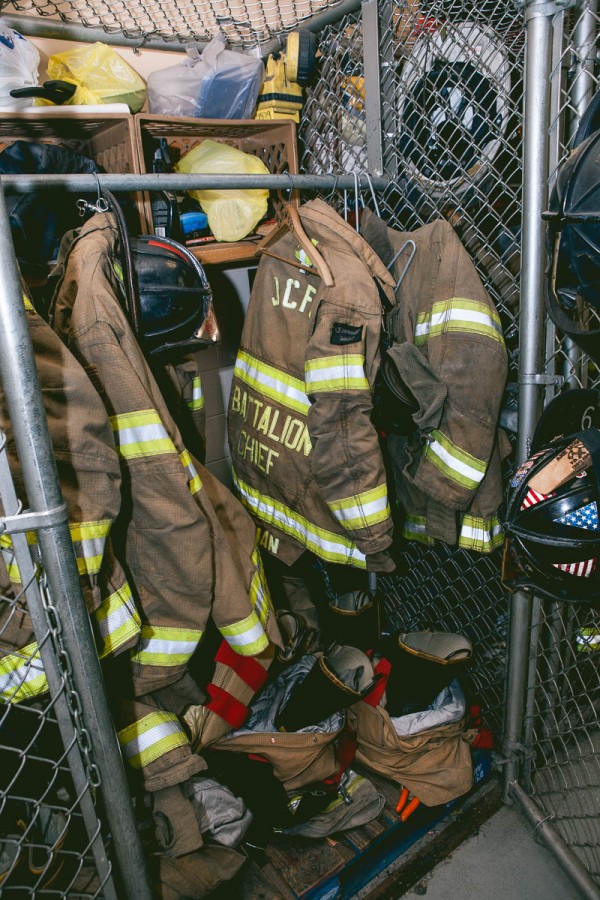 A few weeks ago, I started looking for contacts in the fire department; I wanted to visit a Jersey City fire house to meet with the firefighters and hear their stories.  I reached out to Ward B Councilmen, Khemraj “Chico” Ramchal, who has shown enthusiasm of my work, and he was gracious enough to help me out. A few days ago, I got a call from Jennifer Morrill, the Press Secretary for the City of Jersey City letting me know she was able to set up a time for me to come meet with the firefighters from Battalion 4, group C. 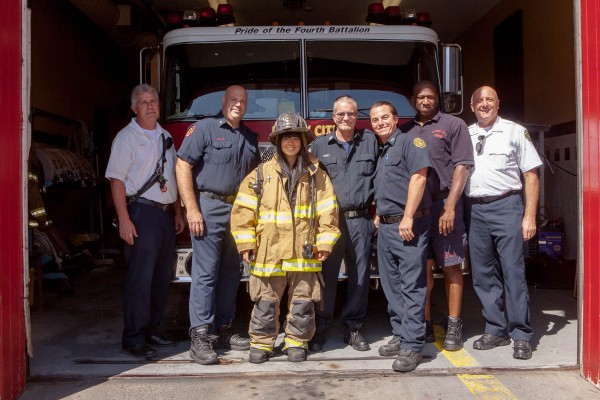 Can you explain to me how the different battalions work? (McGill) Jersey City is divided into 4 pieces, each piece we call a Battalion. In the police department they call it districts. Right now you are in the 4th Battalion and the 4th Battalion chief rides out of this house (Bergen and Duncan).  We cover this quarter of the city; Journal Square area, West side…  There is also an engine company in here; 9 Engine and our 9 engine is one captain who is the officer and is in charge of 3/4 firefighters. 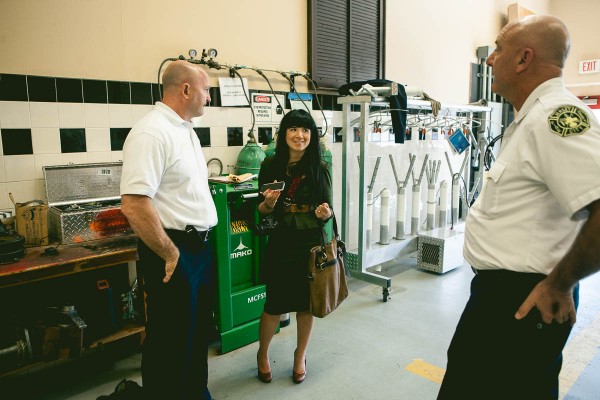 We are located in the 4th Battalion, and he covers the whole square…right now he’s here with us, but the Captain is the one actually in charge of us. The Chief is the boss of Captain… and there will be a Deputy Chief in charge of the whole city, per 24 hour shifts. 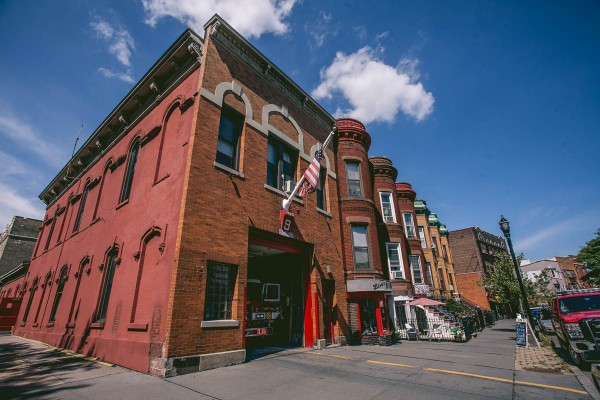 (McGill) Downstairs where we are, we have the apparatus park, you will have the Chiefs car or the fire truck depending on who is in front of who, back there we have our kitchen and one of our better chefs is cooking something up, he made some fresh mozzarella. 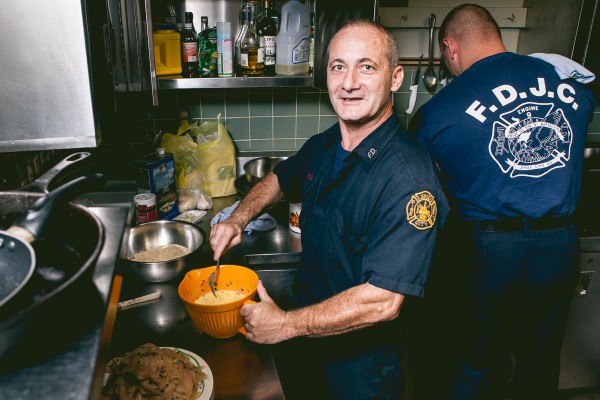 Do you all cook? Share duties? Yea –  Usually we will cook breakfast. We may go out for lunch but sometimes we make it here in our kitchen…we take turns. We will pool our money in the morning usually.

I feel like a little kid I’m so excited, I’ve never visited a fire house before! Wait till you ride on the fire truck! Do you want to try on the gear?

Yes I would love that! 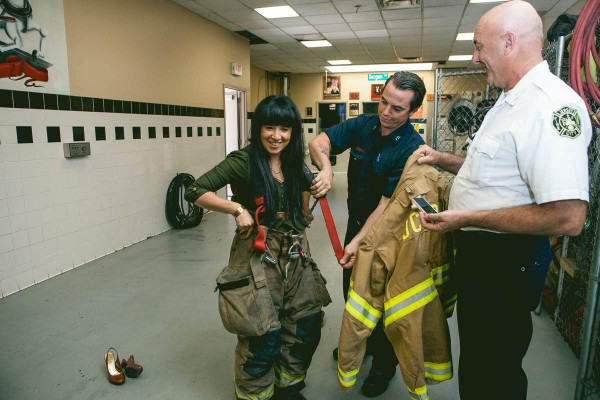 So how do you guys walk around in this. Just like you are! But we get to practice for 8 weeks before we have to do it though. 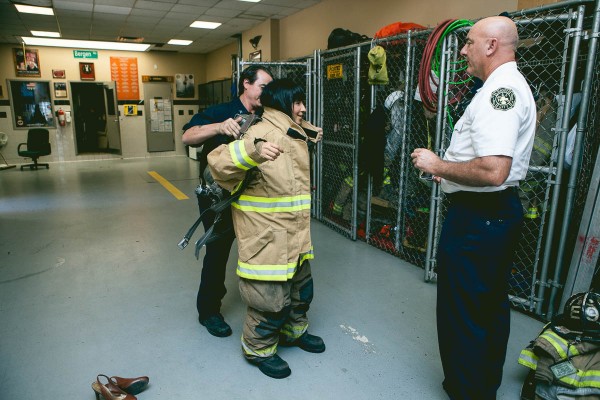 How does this look? Holy moly. We need to give her something to break now. 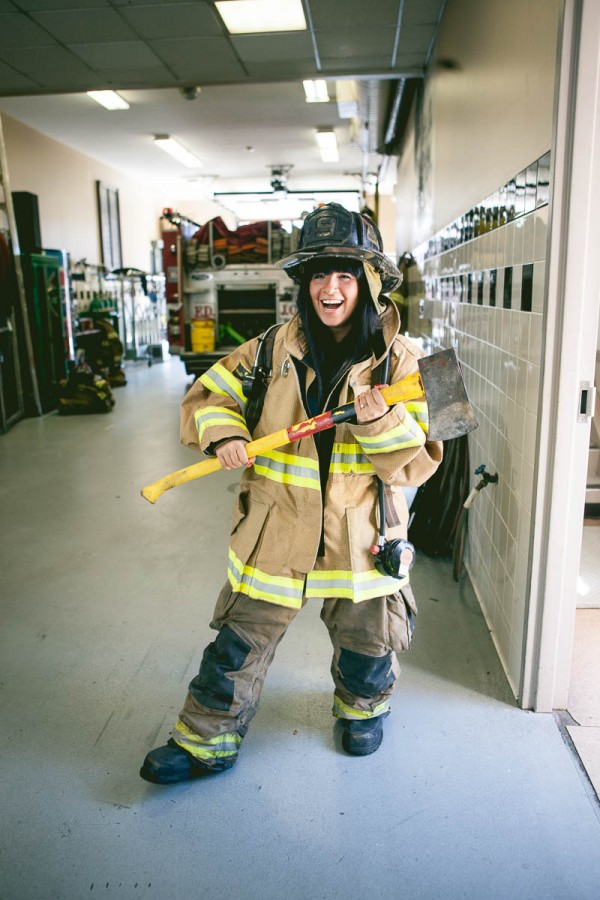 Greg, can you give me a tour? A lot of fire houses have two trucks, a ladder and an engine. We just have an engine and we have the battalion who is in charge of three fire houses besides this one. This is the busiest pump in the state of New Jersey. We do more runs than anyone else in the entire state. This is the apparatus floor where we keep all the vehicles and we have a bathroom there and our kitchen. 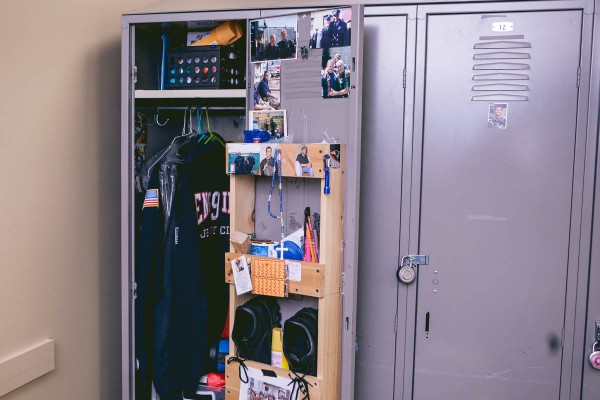 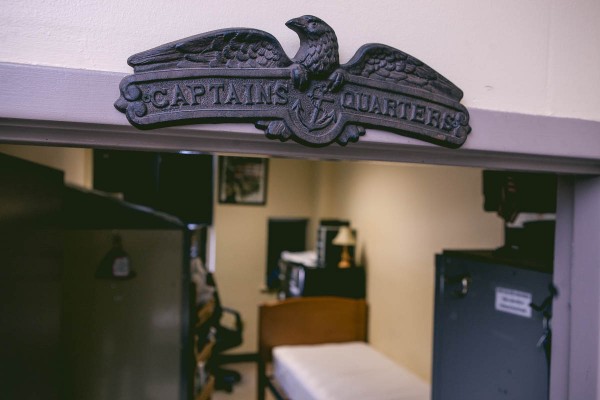 Can we go inside the truck!? Sure! Here we rotate drivers, everyday someone else drives.  Every rig in the city you need to know how to operate. 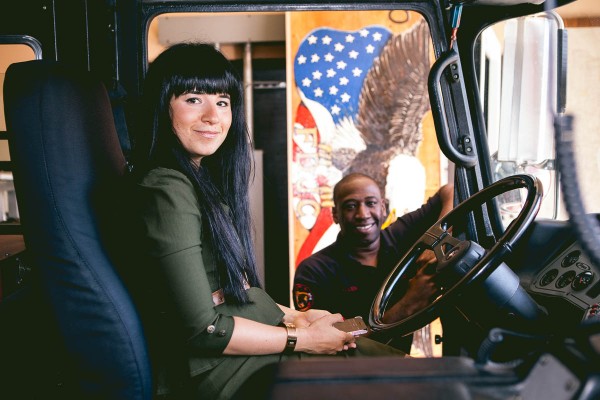 What goes on here in the back? Right here is the captain’s seat and these are our seats. We’ve got our medical stuff, our defibrillator and oxygen. When we go to first responder calls, with medical emergencies, we don’t give needles and stuff but we will hold the scene down until EMS comes. 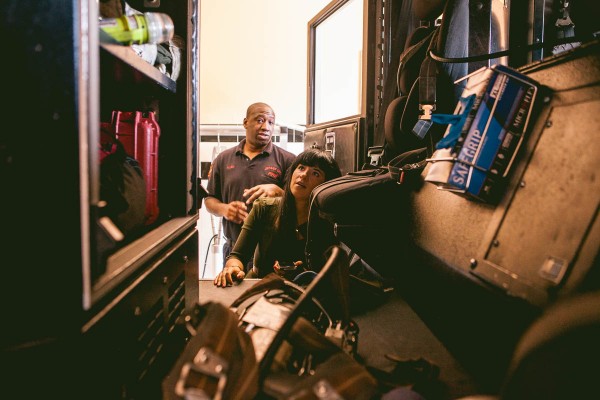 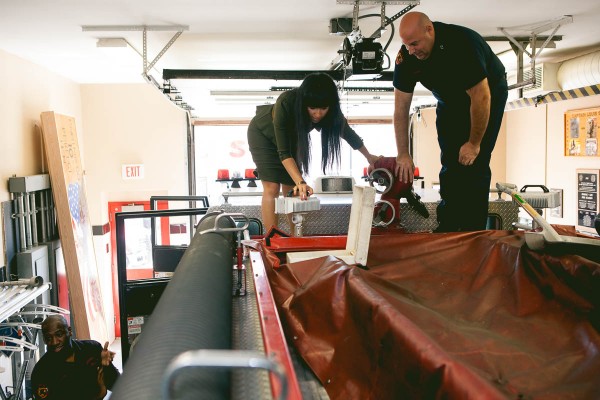 So you don’t ride on the side of the truck like the old days anymore? No – we have to stay strapped in. It’s a safety thing.

How long have you been a fire fighter? Anthony and I came on together, we’ve been here 7 1/2 years. 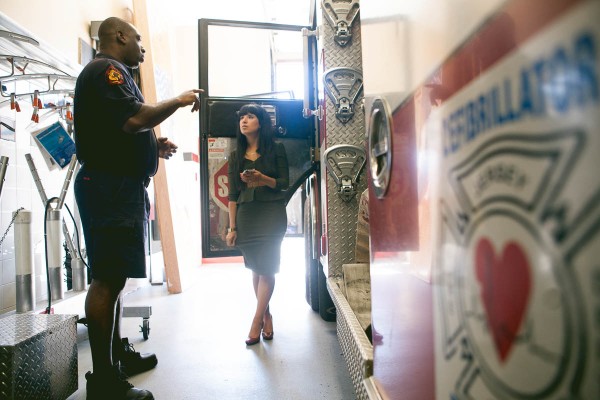 (Captain Early) Want to see a real helmet? One that’s older than you are? 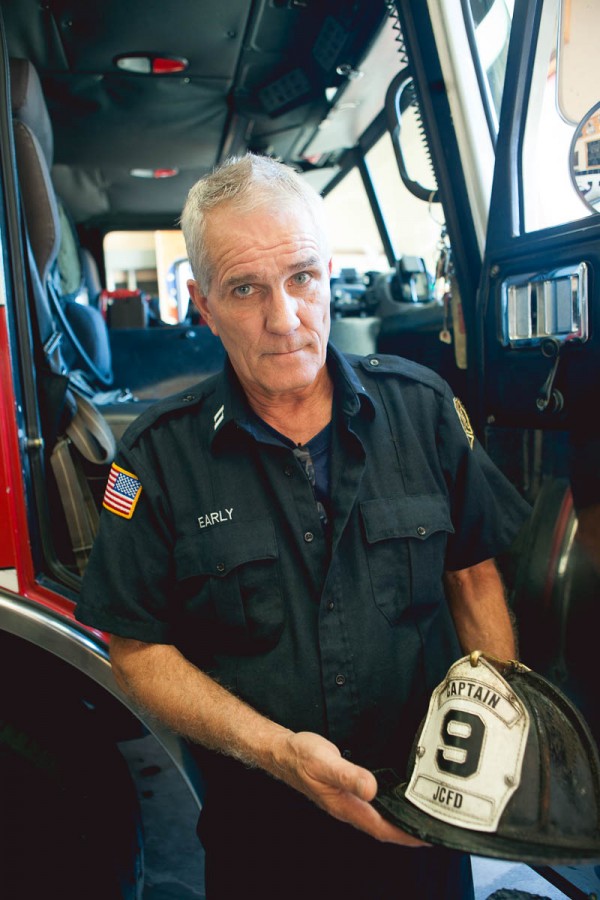 Definitely! How old is it? 1979. This one was my fathers. My father was a captain at 8 Engine… I was born and raised in Jersey City. 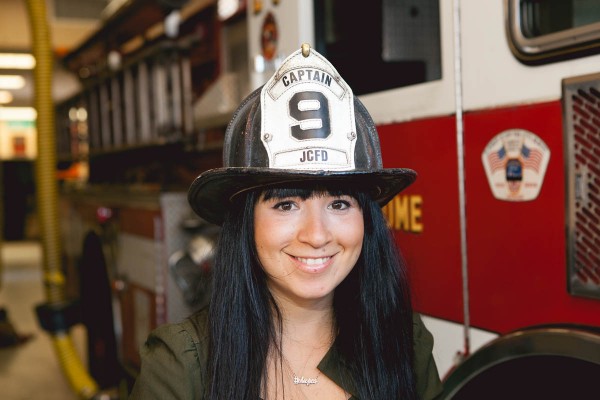 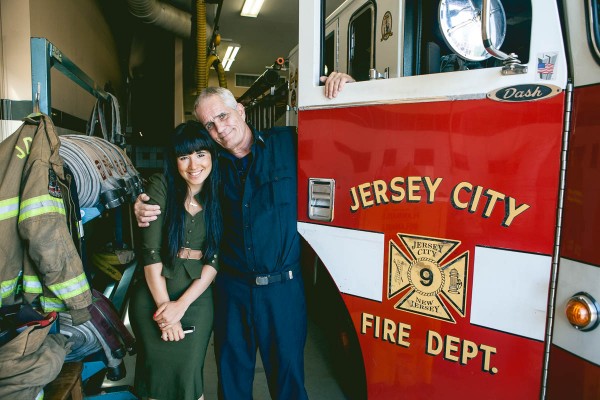 Did you always want to be a firefighter? I never thought about it too much. We were electrical contractors so we ran an electrical business..I used to go to St Anne’s school and the nuns used to yell at me and smack me around because my hands were dirty because I was with my father all morning. I was running that business but then I just took the test… I didn’t really aspire to be a firefighter… I guess I always just assumed I would take the test. 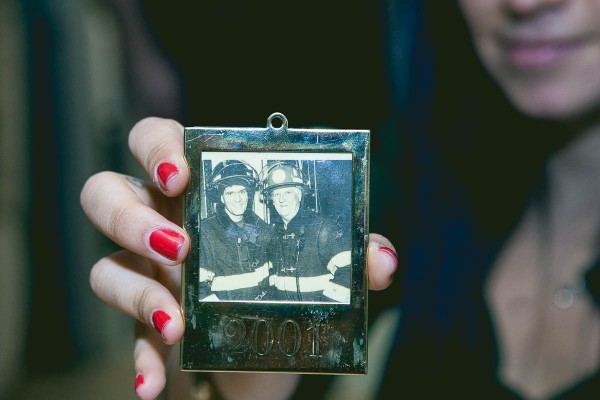 Did you work with your father?  Yeah for 10 years. He retired in 1991. It was interesting at times, we would argue and I would curse at him and people would say “You are talking to the captain like that?”. Haha. 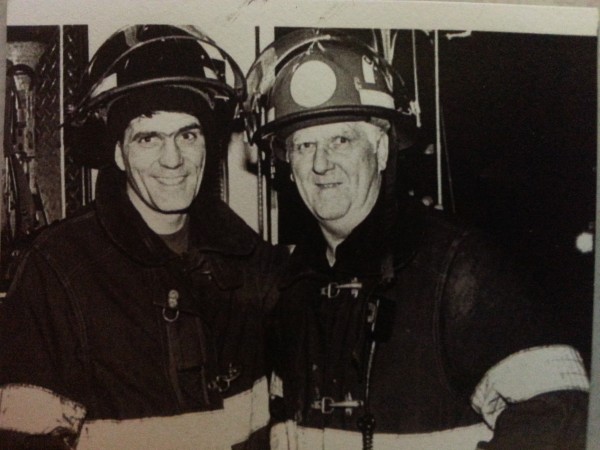 Where were you September 11th? In New York City. I don’t like to talk about it. It gets crazy… It was a wild day. We went with a task force… I was with rescue and 11 truck, squad 4 and 17 engine I think. When I walked down… they had all the New York City guys on the Jersey barrier just sitting there like little lost children. It was horrifying.

I knew a lot of them. It was a bad day…  I stood there like “where do you start?”… and I used to hang out in that area. That was my thing… a bunch of us would get off in the morning go to World Trade Center area and watch the girls go by. Spring time is great in Manhattan…

When I got there that day, I didn’t even know where I was…enough about that. 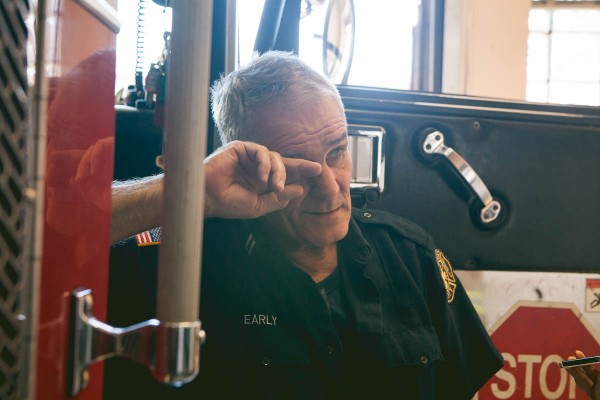 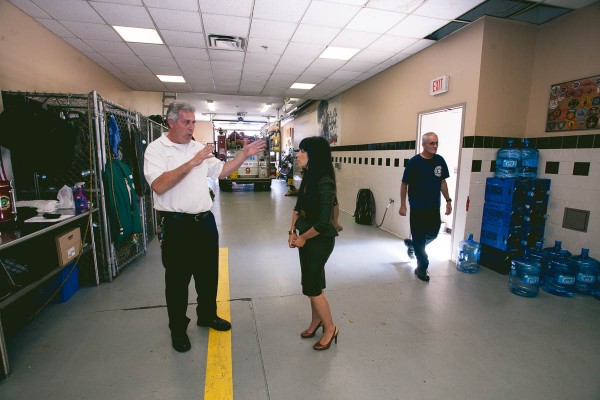 (Somma) Once the people came off the boat down on York street… it was kind of like. “Now what? What do we do now?”. They didn’t want to send people over there because they were scared something would happen here. There was actually a fire that night here in Jersey City. It was non stop the whole 24 hours…

(Fisher) We knew the world changed that day. 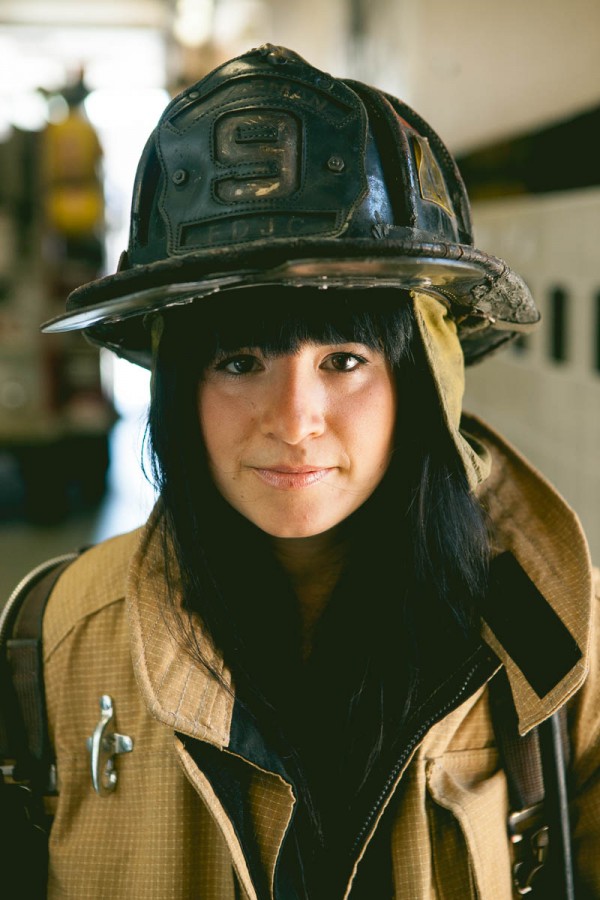 How long have you guys been a crew? About a year… a few of us have been together for longer.

When there is an alarm that goes off what goes through your heads? (Captain Early) “Oh Shit…”

(Somma) No matter what, your adrenaline goes up a little bit until they tell you what it is and they give you the print out.

(Captain Early) It comes up on that TV over there. 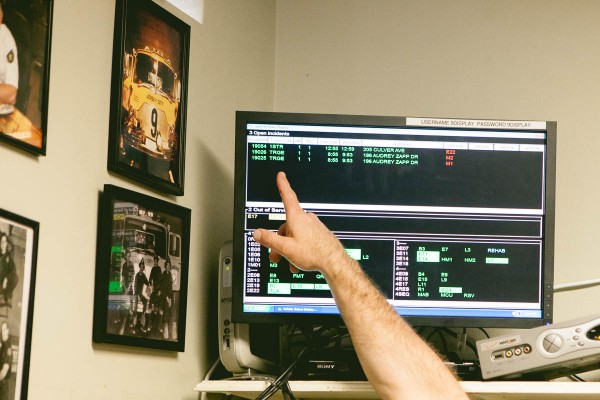 So you get a call, you find out it’s a fire…. (McGill) As soon as the alarm goes off and we get the printout we size up the situation. “Where are we going? what’s our location? what’s the best route to getting there…what type of house is it?”. You try to get a mental picture of what you are going to see when you get there… There is a lot of things that go through your head.

(Fisher) We know the area so sometimes we will have an idea of what we are getting into. 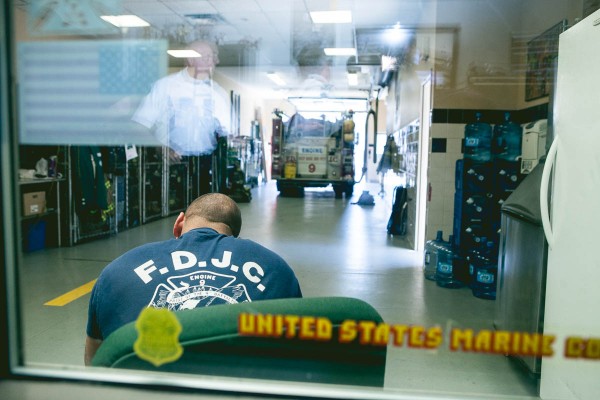 (McGill) There is a website we go on that’s called “Firefighter close calls” we look at it to learn. No two fires are ever the same… 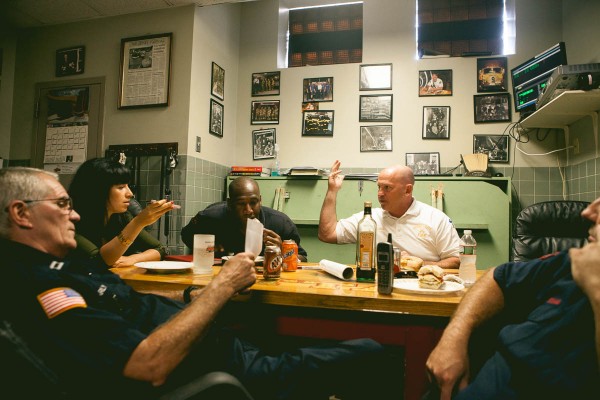 (Somma) We are going into places we’ve never been, you have people who are pack rats that store everything they’ve ever gotten… and we have to go in there and we have to search for them.

Can you tell me a happy story? (Captain Early) Like saving a cat out of a tree? that kind of stuff? 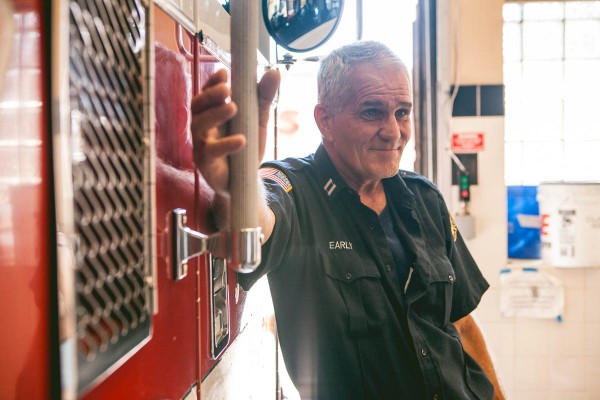 Haha, something funny! (Captain Early) Well once we showed up to a place and a guy was like “What are you looking for? the house that’s on fire, or the guy on fire?”

I guess that’s funny in a sordid way haha. (Somma) You have to understand, to us it’s funny! These strange experiences are funny to us.

Do you have a strange experience? Working with these guys!  (Everyone laughs)

Hahahah. (Fisher) It’s like a family, everyone has different quirks… 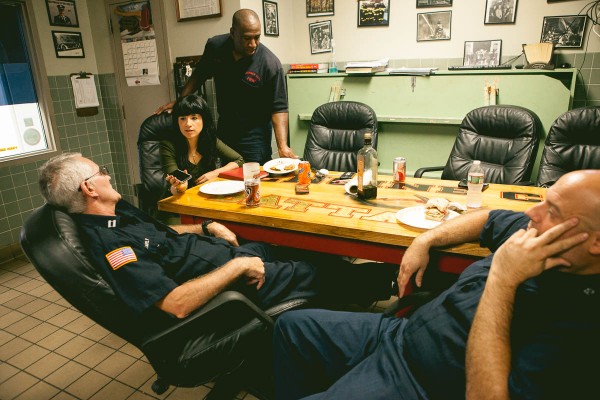 How is it sleeping here? (Captain Early) What are you talking about? We rest between alarms. What’s a matter with you?

Haha! (Somma) Out of all the engine companies, this is the busiest engine company. There is no real rest, we are lucky if we get 20 minutes…but there are antics in the bunker room.

Any funny pranks? (Somma) One of the guys left his phone so I changed the ring tone to “It’s raining men” so I made sure that right around 10am I called his phone. He picked it up and said “you got me good”. 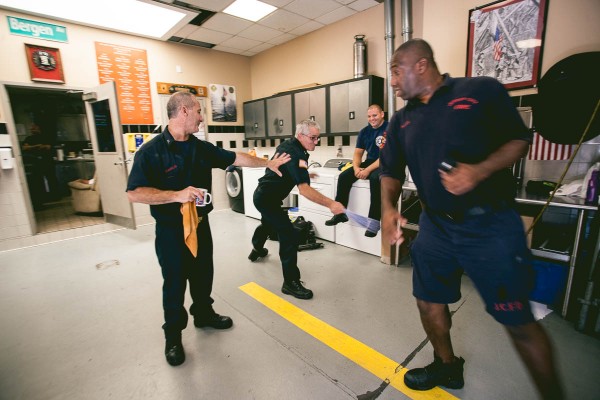 (Captain Early) I have one, I am not going to say where this was… The captain would get up to go to the bathroom in the middle of the night and he would always slam the door… the guys would get pissed off. They take Saran wrap and put it over the urinal so he ends up peeing all over his feet. (Everybody laughs). I thought that was beautiful!

It’s like summer camp here. (Somma) It’s one of those things, as much as we screw around with each other, when we go to a fire we are brothers. 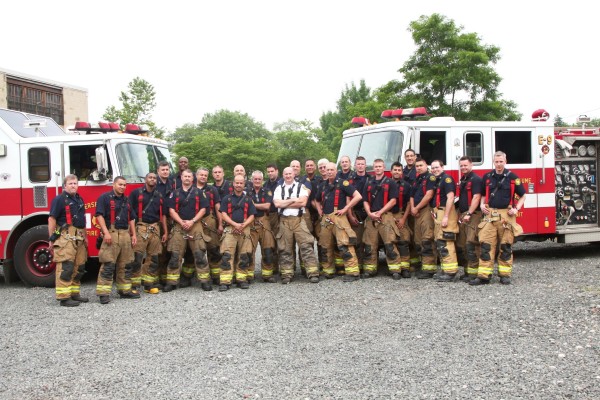 I want to thank Councilman Chico and Jennifer Morrill for helping me make this post happen. I am truly appreciative of this opportunity and experience of being able to spend time with these wonderful fire fighters; eat a delicious lunch, hear their stories and most important make new friends.  To Battalion 4 Group C; I owe you guys lunch!