Monuments and sculptures pose as immortalizations of people and memories within a community or movement. Not to say that this is an exact definition, but an artist’s perspective on culture’s creations. Talk about time travel.

For a moment in time, I tracked down several statues in the Journal Square area and explored their histories.

Many pass the statue dubbed the Jackie Robinson statue on their commute to the PATH. Unfortunately, a countless number of Jersey Citians seldom know the history of their cheering bronzed figure that towers around passersby. The Jackie Robinson sculpture commemorates when Robinson made his debut as a member of the Montreal Royals in the game against the Jersey City Giants on April 18, 1946. The figure was sculpted by the artist, Susan Wagner in 1998. The statue was revealed February 25, 1998, on Robinson’s 50th Anniversary in celebration of his breaking the color barrier in Major League Baseball. 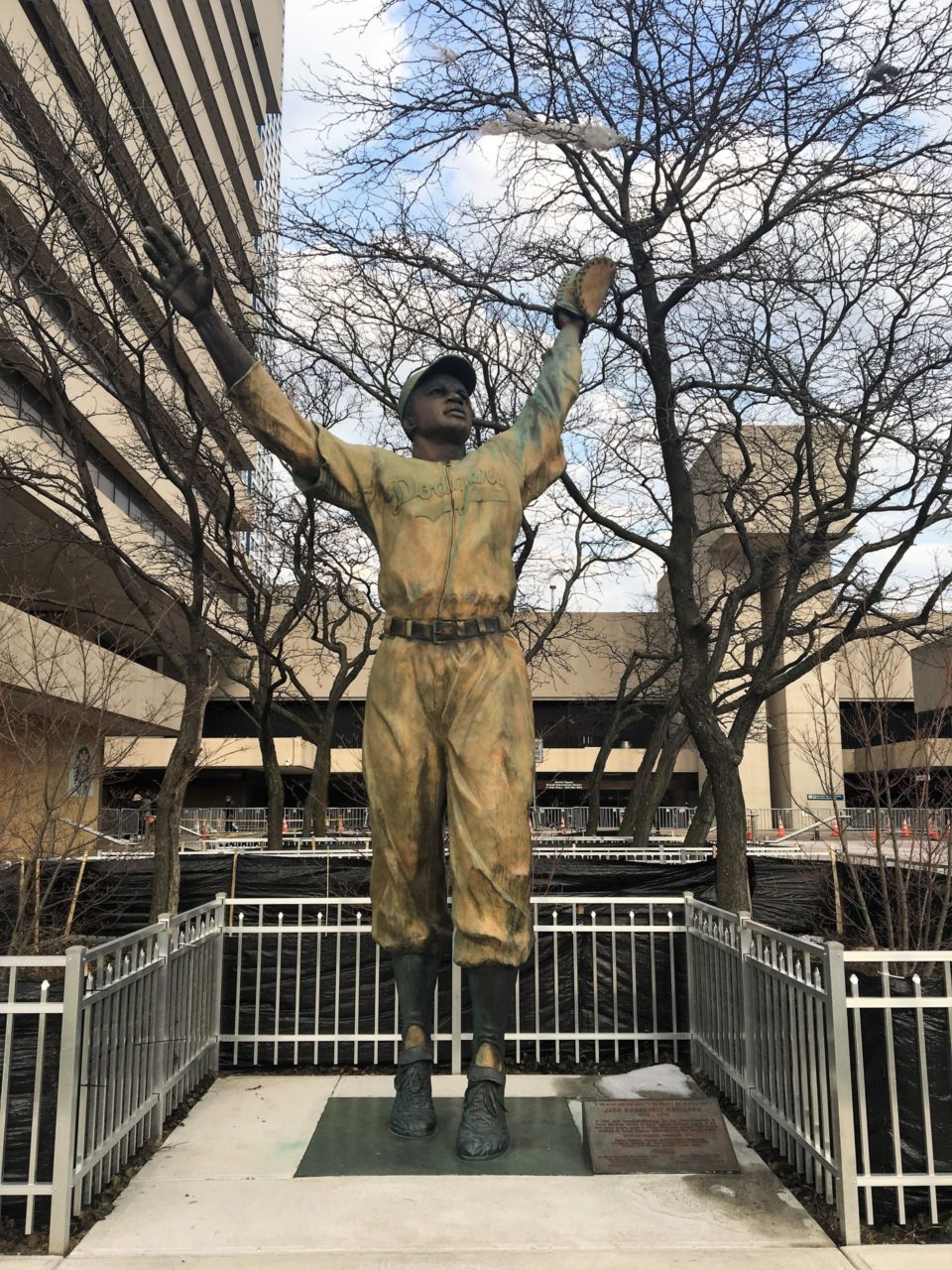 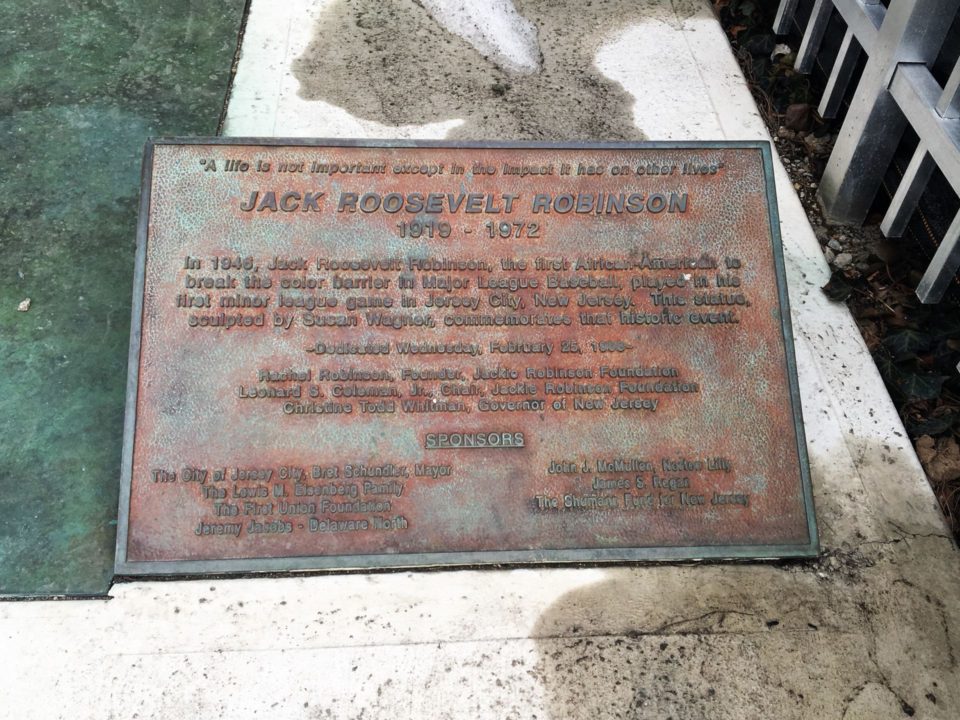 Elegantly and heroically stands a man resembling the gold and riches of the past. Peter Stuyvesant is one of Jersey City’s very own founding fathers. He was the director-general of the Colony of New Netherlands which were the Dutch communities that included New York and City and Jersey City. Sculptor, John Massey Rhind crafted the statue for $15,000 and donated it to the Village of Bergan (currently Bergen Avenue and Academy Street as well as the area surrounding Journal Square) in October 1913. In the past, the statue had been uprooted, and parts of it had been vandalized. The base of the statue was horribly destroyed when the statue was removed from in front of Martin Luther King School in Journal Square. Through the help of private donations, grants, and the Jersey City Landmarks Conservancy, the foundation for the statue has been rebuilt. Peter Stuyvesant now proudly hovers over an outdoor lounge across from Hudson County Community College’s Culinary Conference Center. 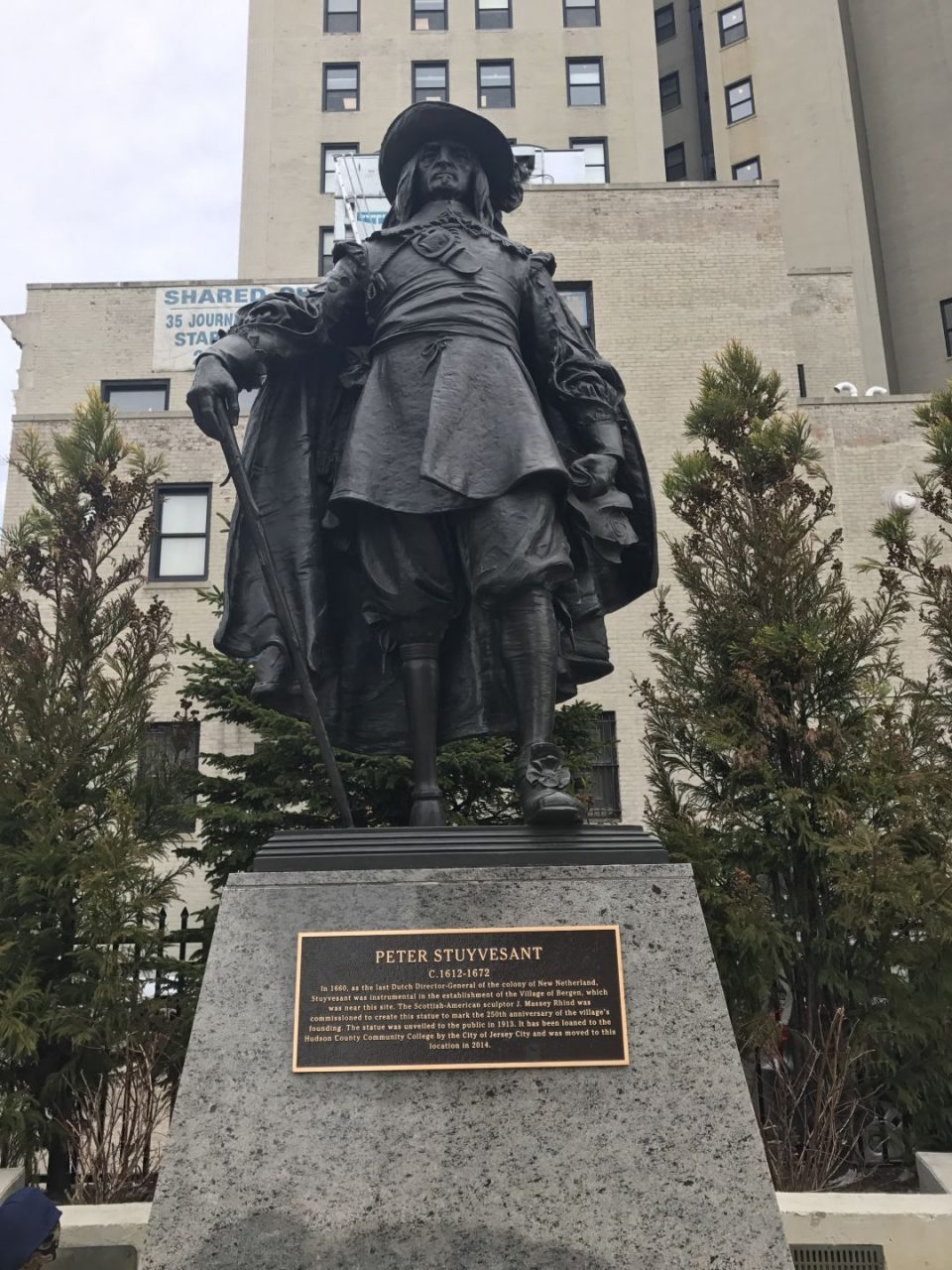 Eagles soar nonchalantly in the skies above us. In the case of the Memorial Triangle, a sculpture made “In memory of those who made the supreme sacrifice in all wars of our country,” a bronze eagle was crafted and mounted on top of the war memorial. It was originally located on the triangle at the Southwest corner of the Newark Ave and Kennedy Boulevard intersection. When the turn was created at that intersection, the sculpture was relocated to its current location across the street. Unfortunately, some years ago, the eagle sculpture was lifted clean off the pedestal. What remains can be found outside of India Square nearest Apna Bazar Cash and Carry. 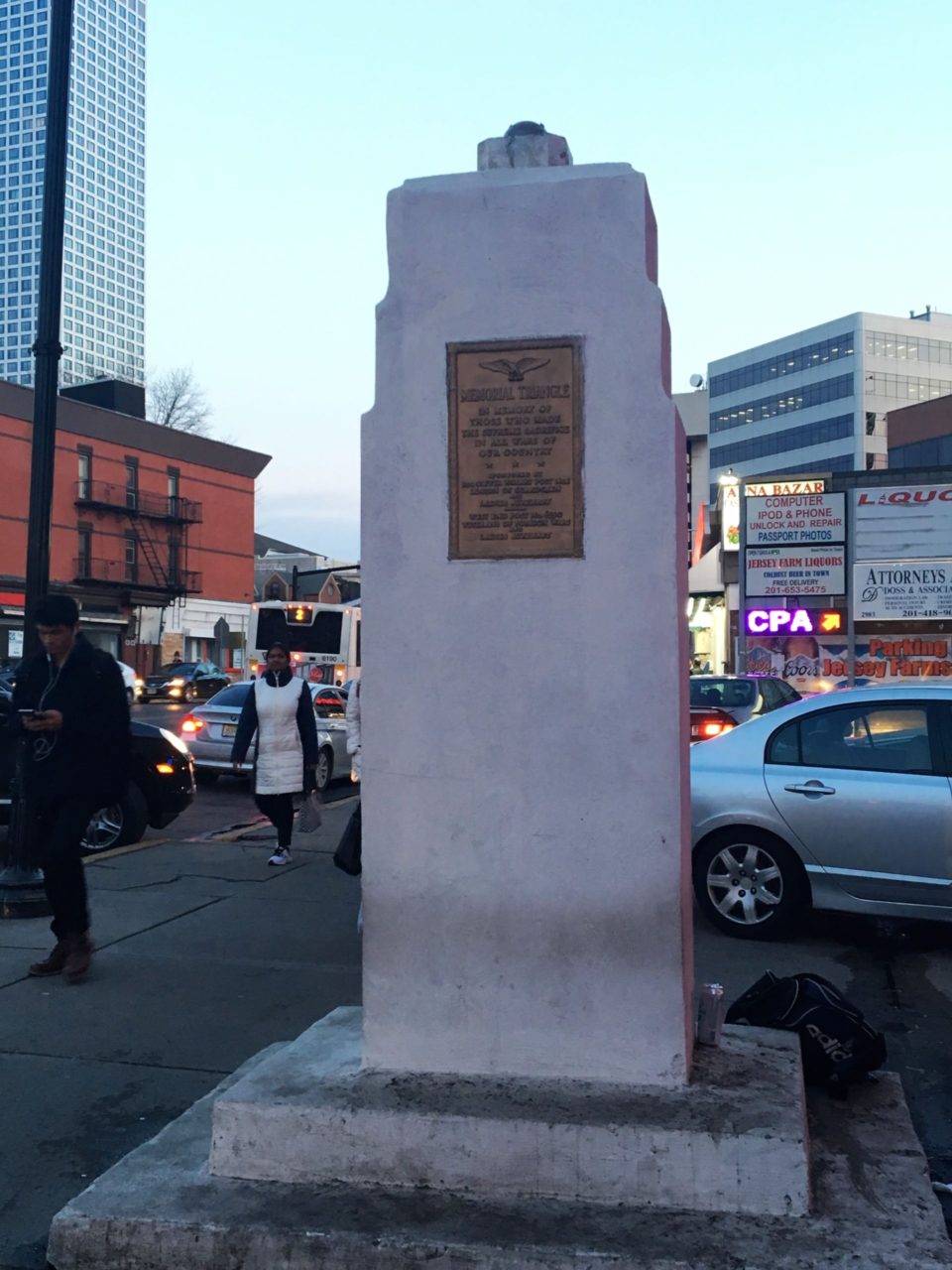 Unveiled on August 7, 2004, was the Purple Heart Memorial located on the island across from Wells Fargo in Journal Square. The Maryland Purple Heart Memorial is a solid red tribute and reminder of the bloodshed in the name of freedom. The monument was drafted by Bona-Fide Memorials of Jersey City and then constructed in Vermont. There’s another plaque on the opposite side, next to the flag pole. 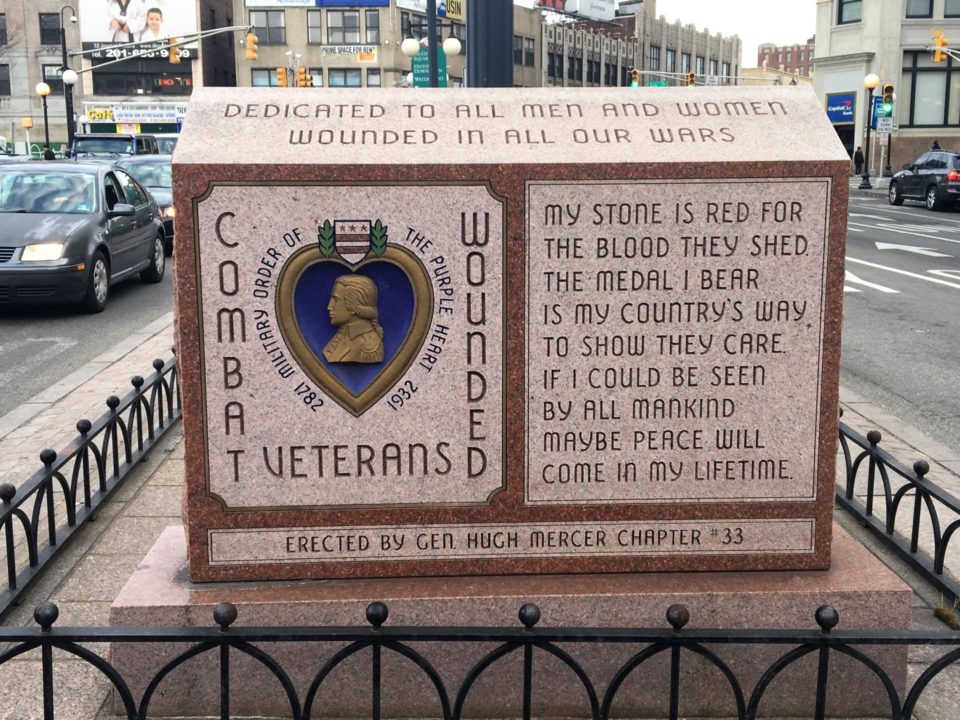 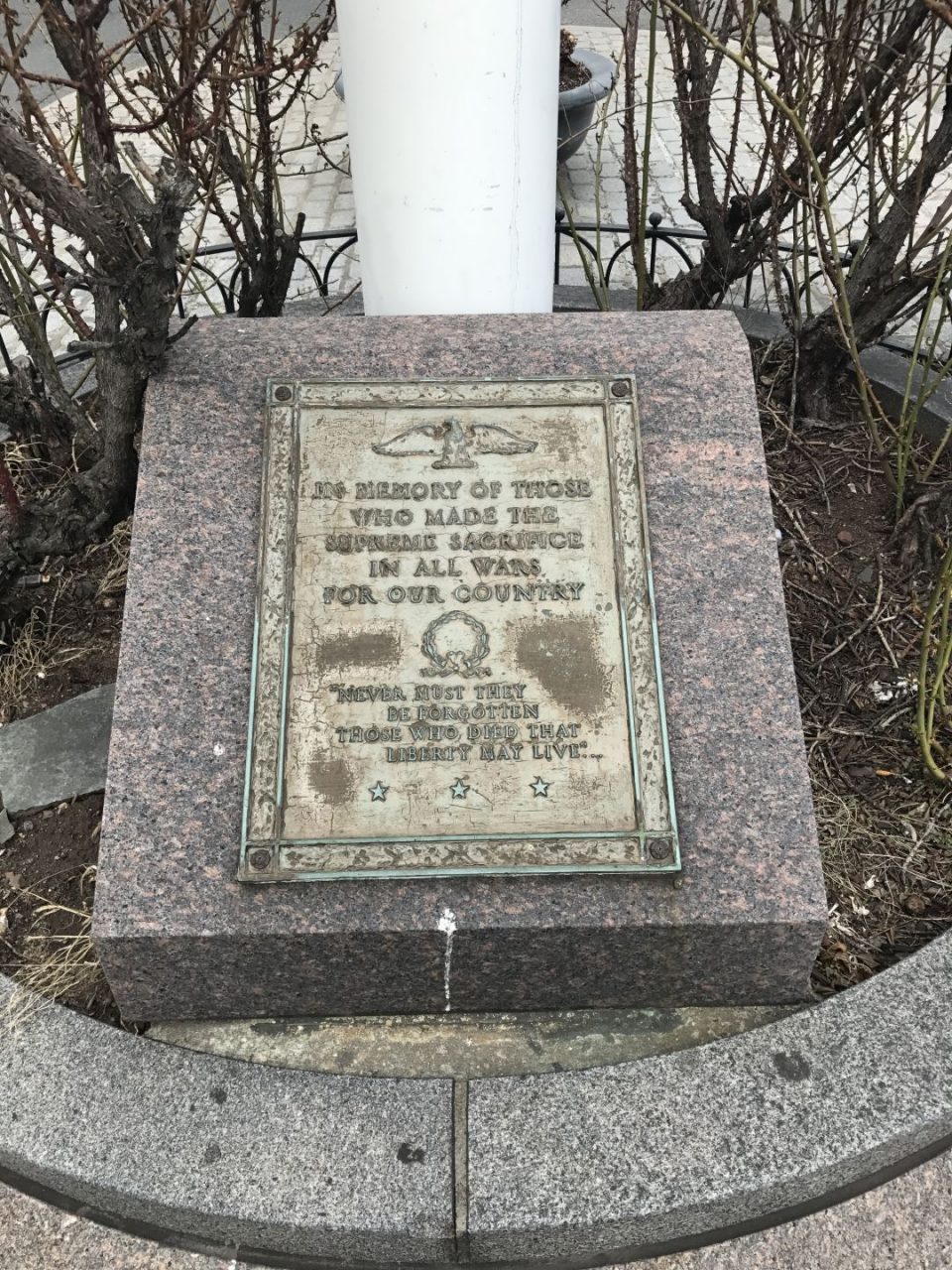 Dedicated on October of 1950 was the ten-foot-tall statue of Christopher Columbus created by Jersey City resident and sculptor, Archimedes Giacomontonio. The explorer stands strong at the top of a white marble pillar points westward with his right hand, he holds a cross in his left. When the statue was originally installed, he was pointing in the wrong direction: East. He was turned around so that he was guiding his followers West. The piece was originally located on the island across from the Loew’s Jersey Theater; it has since been moved to the Journal Square Plaza. 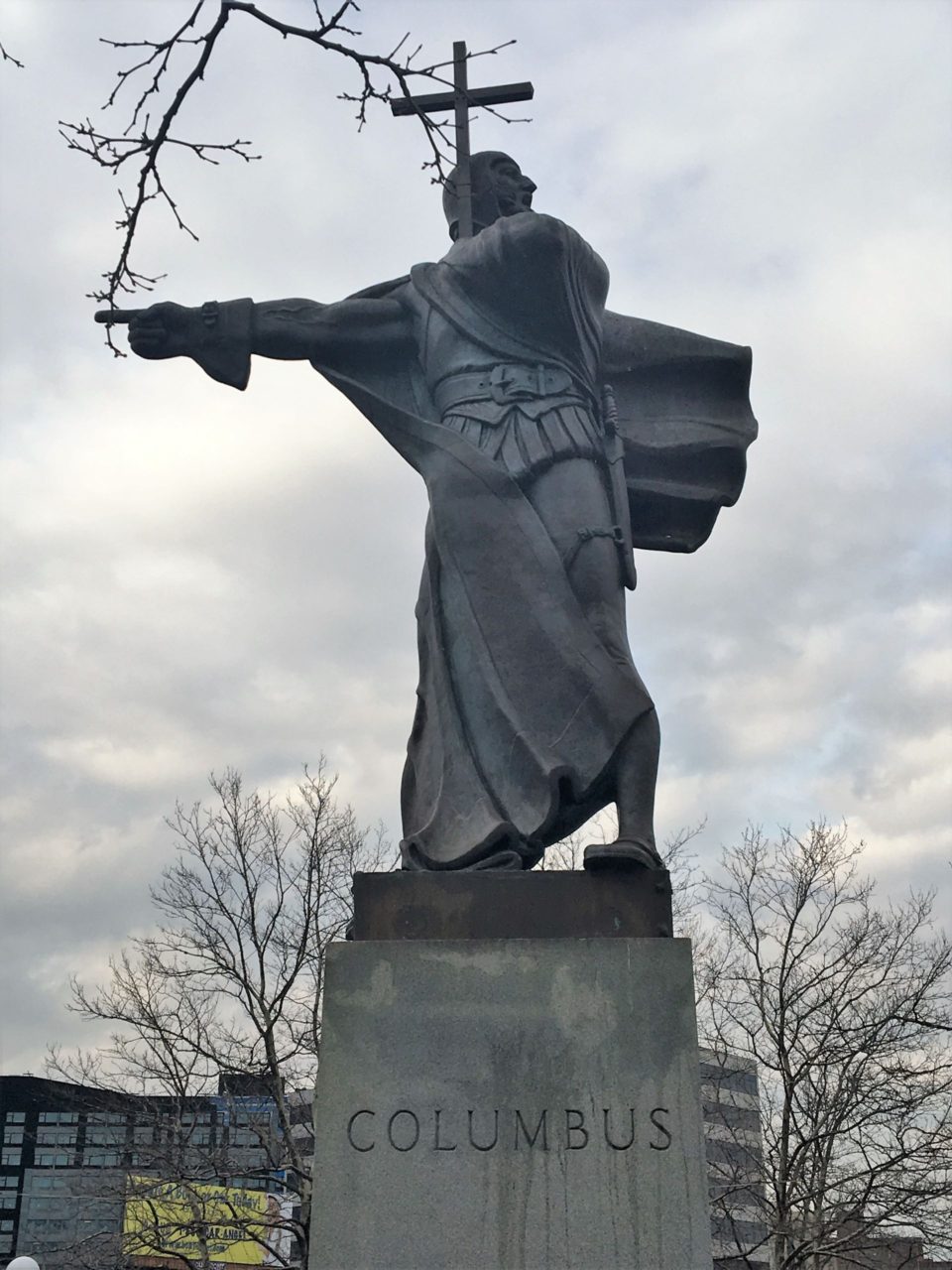 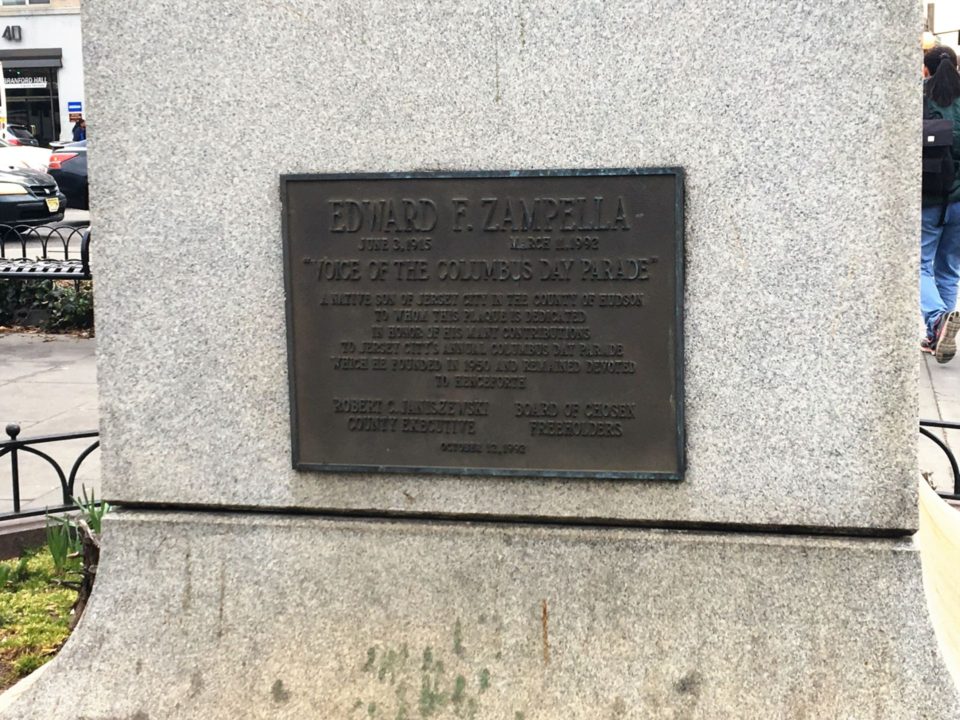 Outside the center of the Journal Square is a fountain that remains intact but dry through the seasons. Originally constructed in the 1990s, it was rededicated in 2002 to 37 Jersey City residents who lost their lives on that fateful day on Sept. 11, 2001.

The fountain is dedicated to the names of Jersey City residents etched into the stone:

Both the 9/11 Memorial and the Christopher Columbus statues are currently in the middle of what will soon become 1 Journal Square. The developers, KABR and Kushner Companies, will be temporarily removing Christopher Columbus and reinstalling him in the new park/plaza that will be created. The 9/11 memorial and the fountain will be removed completely. The blocks inscribed with the names of those who lost their lives will be available for the families to pick up and keep. The memorial will be completely redesigned and incorporated into the design of the new park/plaza. 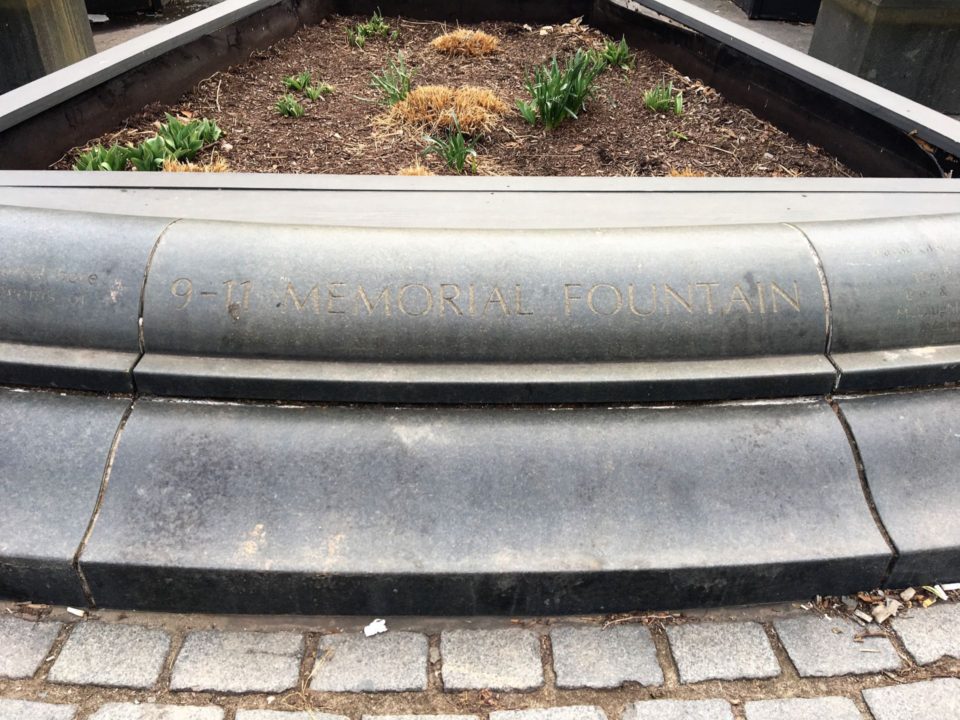 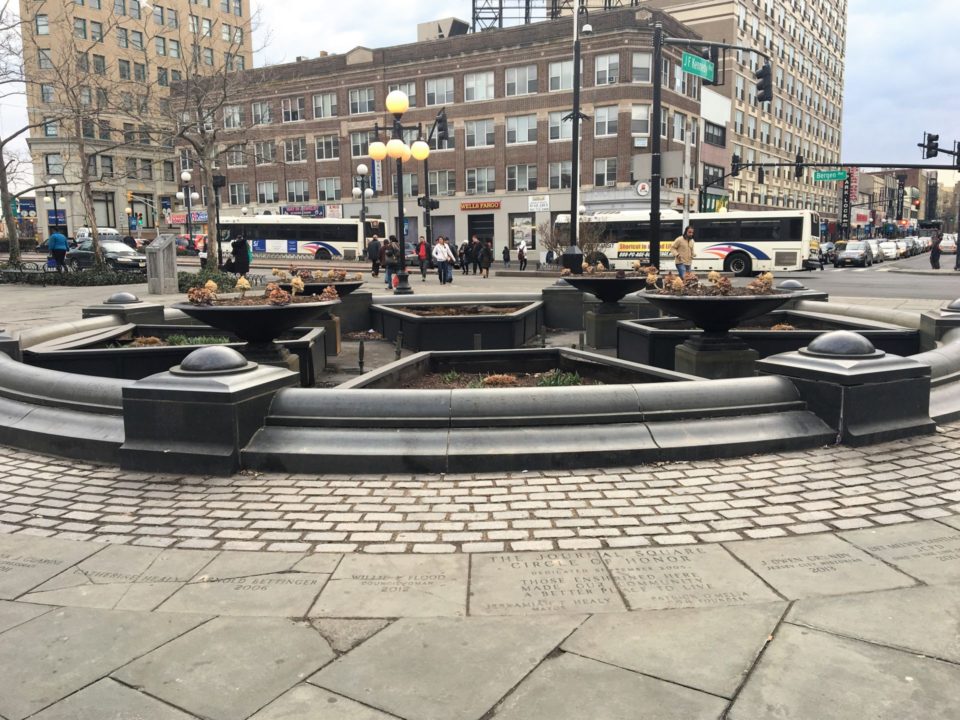 George E. Blakeslee, nicknamed the Father of Good Roads. When driving down Broadway and Route 1/9 in Jersey City, it is often hard to capture a glimpse of the Blakeslee Memorial. While technically outside of Journal Square, smack dab in the middle of an island the Blakeslee Memorial stands tall as vehicles swiftly pass by. Being the Father of Good Roads only calls for a history lesson. Blakeslee Route (near the gas stations and Rita and Joe’s) was originally a Revolutionary War route. The monument was erected in 1931 and rededicated to Blakeslee in 2005. George was a Jersey City resident who headed the New Jersey Department of Transportation in the 1920s and 1930s. The plaque on the pillar reads: In honor of George E. Blakeslee Pioneer of the modern highway. This is also a memorial to Route 1, the first interstate in all of America, formally connecting Maine to Florida. 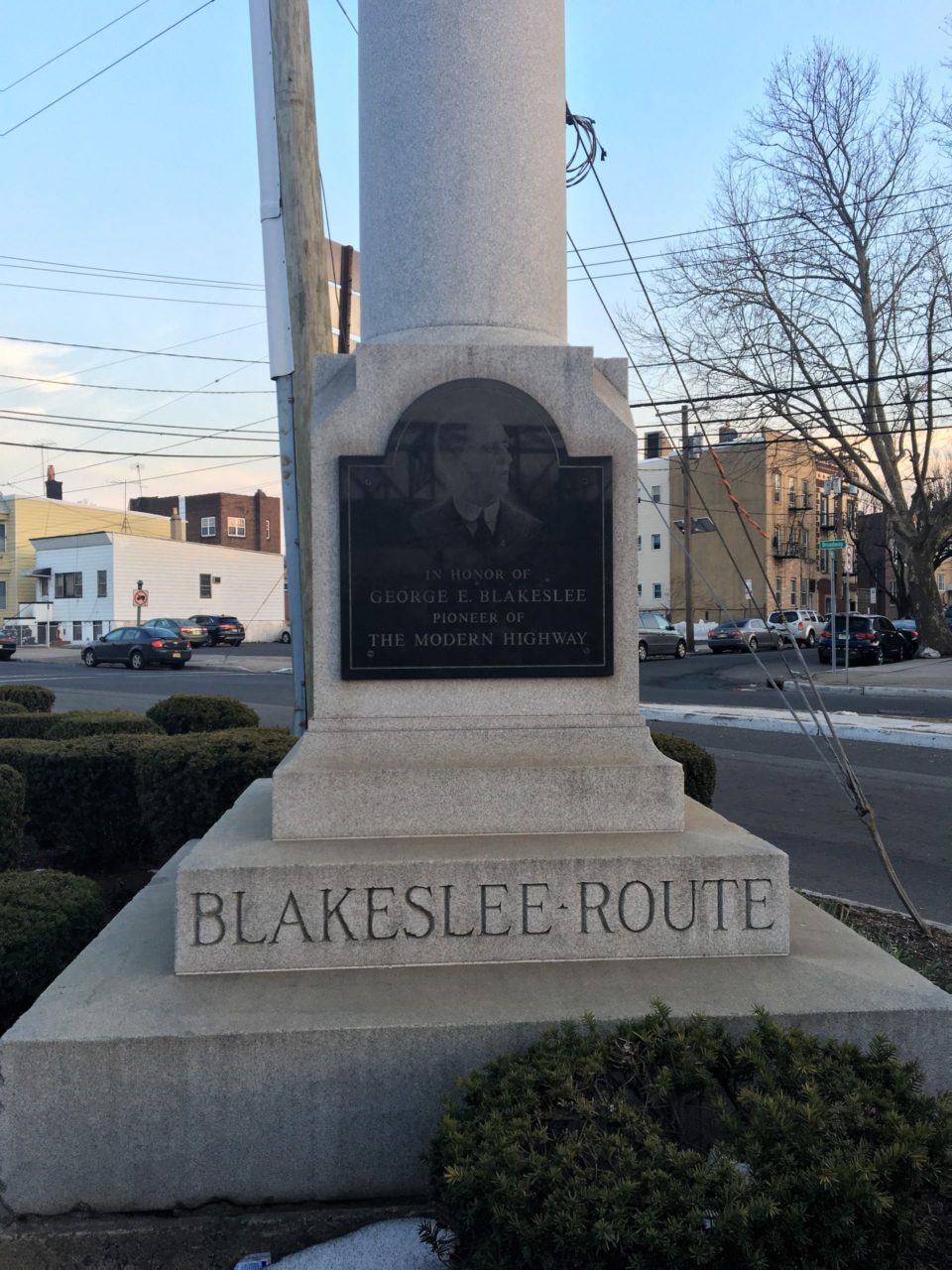 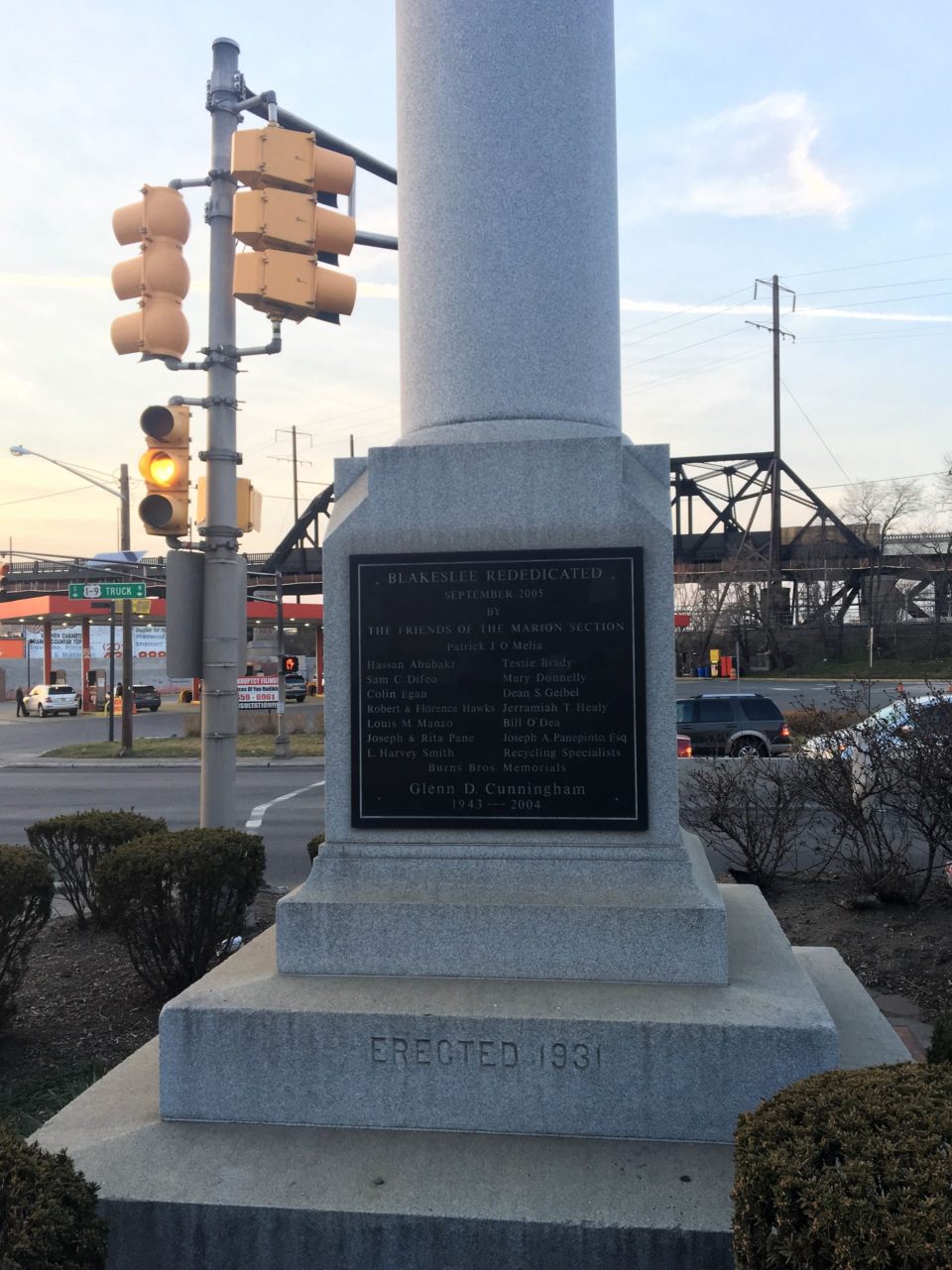 Stay up to date on The New Journal Square http://www.thenewjournalsquare.com