There’s some amazing architecture here in Jersey City with so much history and many stories behind them. One of my favorite buildings is the historic Brennan Courthouse located in Journal Square. When I first set foot in the courthouse a few years ago for an event, I was in shock and awe because of how stunning this building is. I went back there a few months ago for another event and one of the police officers offered to give me a private tour. He was able to tell me a few stories, which I really enjoyed, but I needed more information. I reached out to one of my really good friends Krista aka Grandma Downtown, who currently works for Hudson County Cultural Affairs, to set me up with a private tour of the courthouse. This time, I would bring our videographer Laura to capture the tour for your viewing enjoyment! You can press play to watch the tour or skip ahead to read!

I am the Program Development Specialist here for the Hudson County Office of Cultural & Heritage Affairs/Tourism Development. 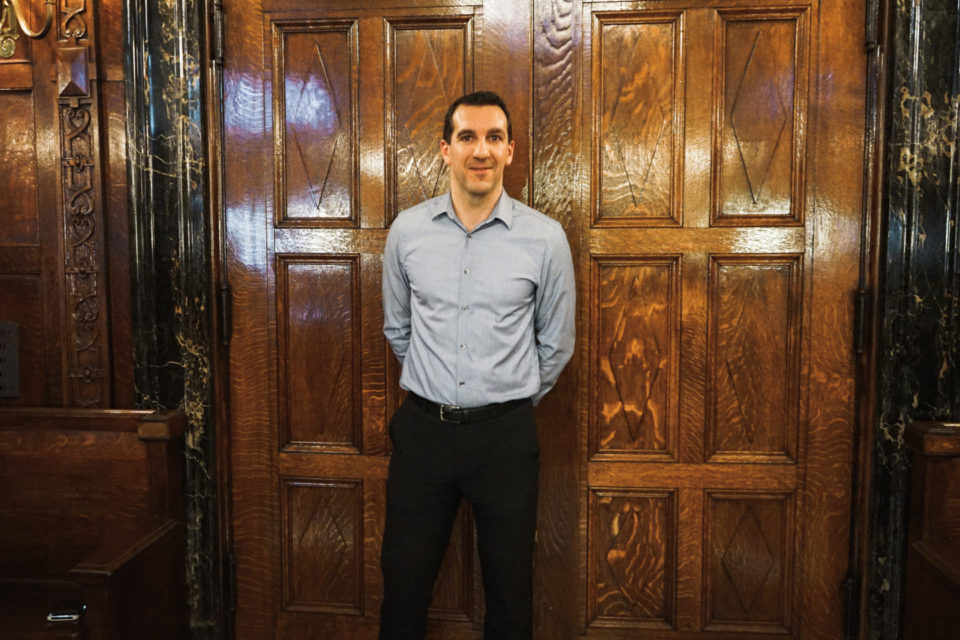 And you’re giving us a tour today.

Awesome, let’s start with this room.

This room is the old Freeholder’s Chambers. It’s an active courtroom. Howard Pyle is the artist of the art you see around you. Each of the courtrooms are completely different. There are eight active courtrooms and this one’s the grandest of them all with the wonderful chandelier and bronze work. 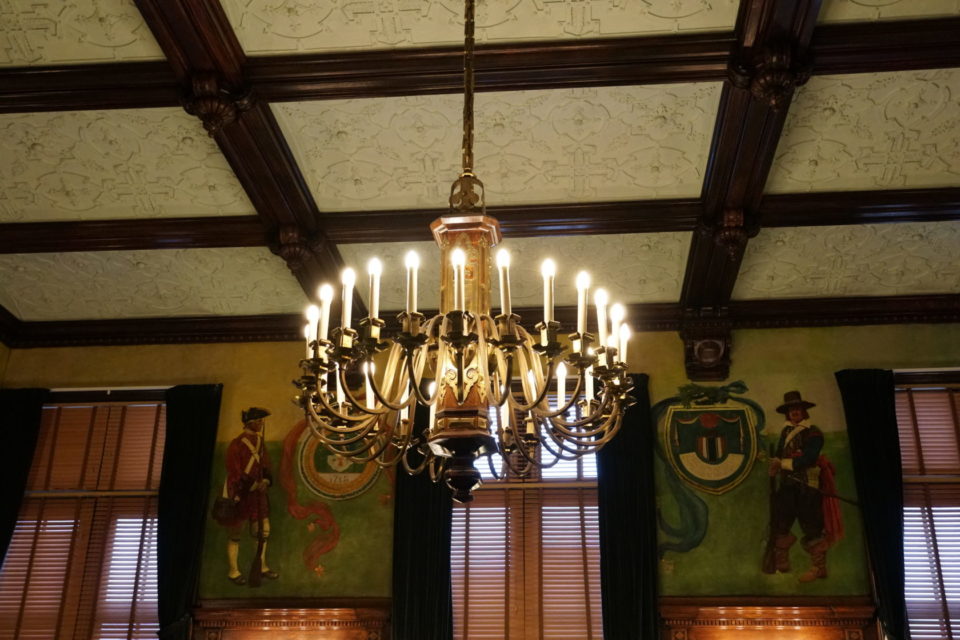 How long has the courthouse been here?

The courthouse was built in 1910. It was shut down in 1966 and everything was moved next door; it was completely abandoned. It was designed by Hugh Roberts, the artwork assigned by Francis Millet, and used for all of Hudson County’s court proceedings. The old courthouse is where the current parking lot is next door, and then it was moved here. They didn’t want the art to overshadow the proceedings, so these aren’t even grand for the time period if you could believe it. 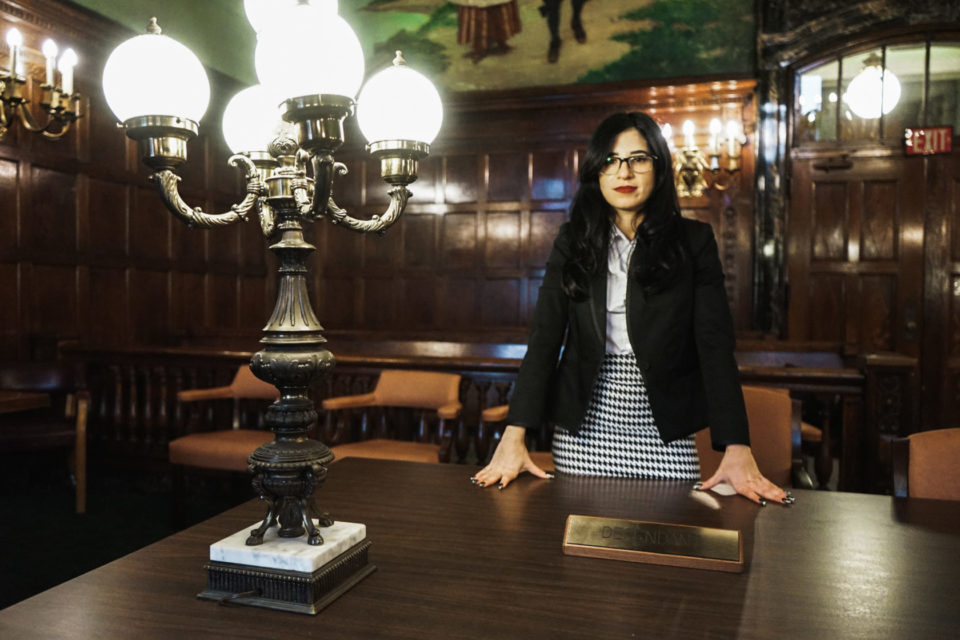 Yes. It was abandoned in 1966 and left to crumble. In 1970, it was designated a national historic landmark and it was completely restored. Restoration began in the mid-1970s, and the building was reopened in 1985. In 1984, the Hudson County Board of Chosen Freeholders renamed the building in honor of Supreme Court Justice William J. Brennan Jr.

What kind of cases are heard here?

These are all the county civil cases.

Do people also get married here? 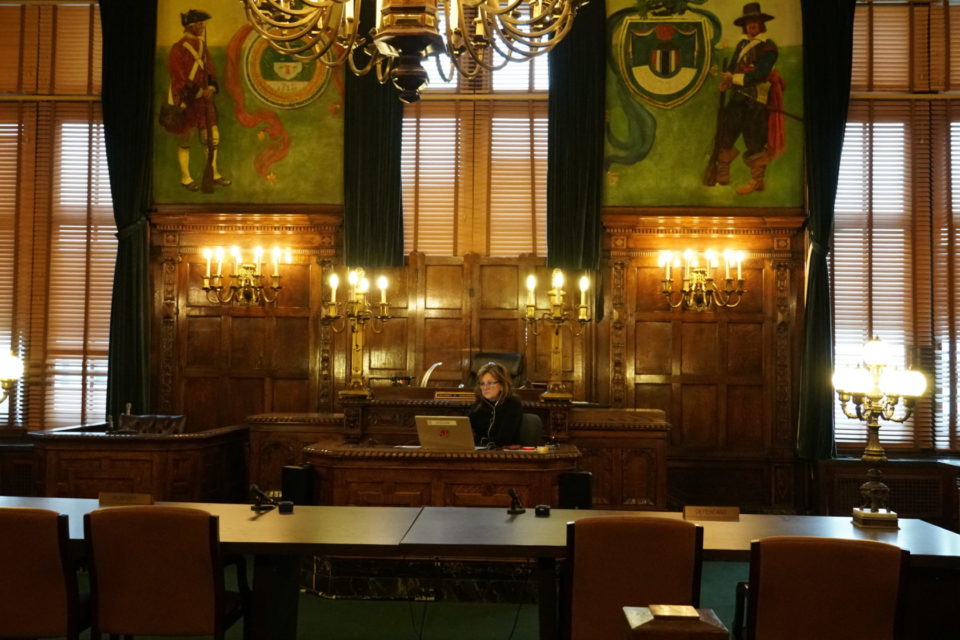 How was that experience, Krista?

Every courtroom is different. Why is that?

I think that, in that era, they reached this new kind of grandiose architectural view and there was a newfound wealth. A lot of Jersey City, including the Terminal at Liberty State Park, was built around the same time. In that time, they were getting all this great artwork and architectural wonders done. They didn’t want to go too crazy with these courtrooms, but you’ll see. 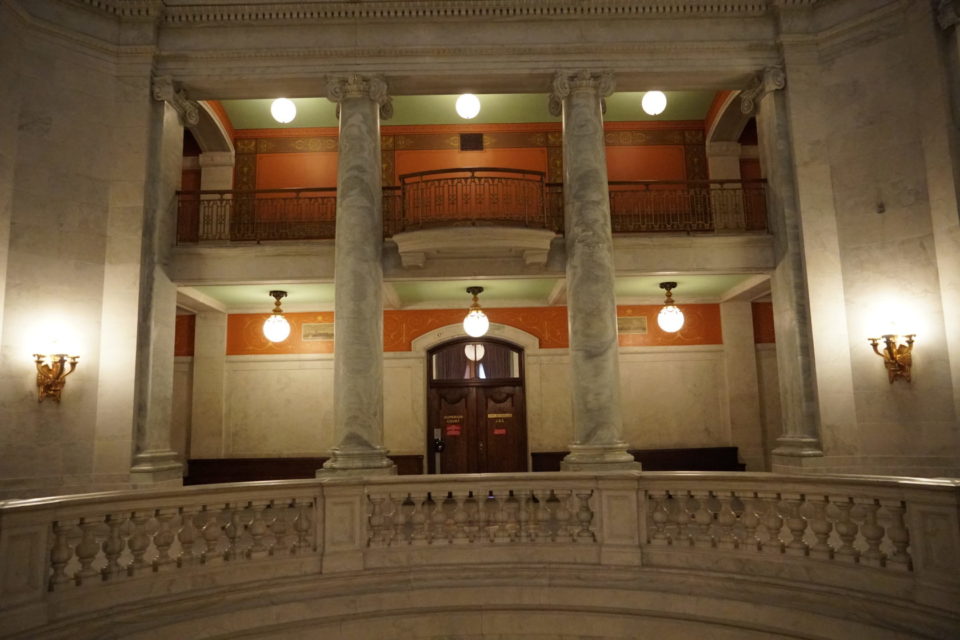 I love the second floor because you get a lot of the grandeur of the building. You get a nice view of the marble columns up into the dome, the rotunda, and the twelve zodiac. Starting in June, there’ll be more renovations happening here.

The stained glass was completely ruined and they had to redo it. They basically had to redo the whole building except for the marble & granite, which stands pretty well. All the bronze you see, the light posts and railings were all gone. They recast everything. 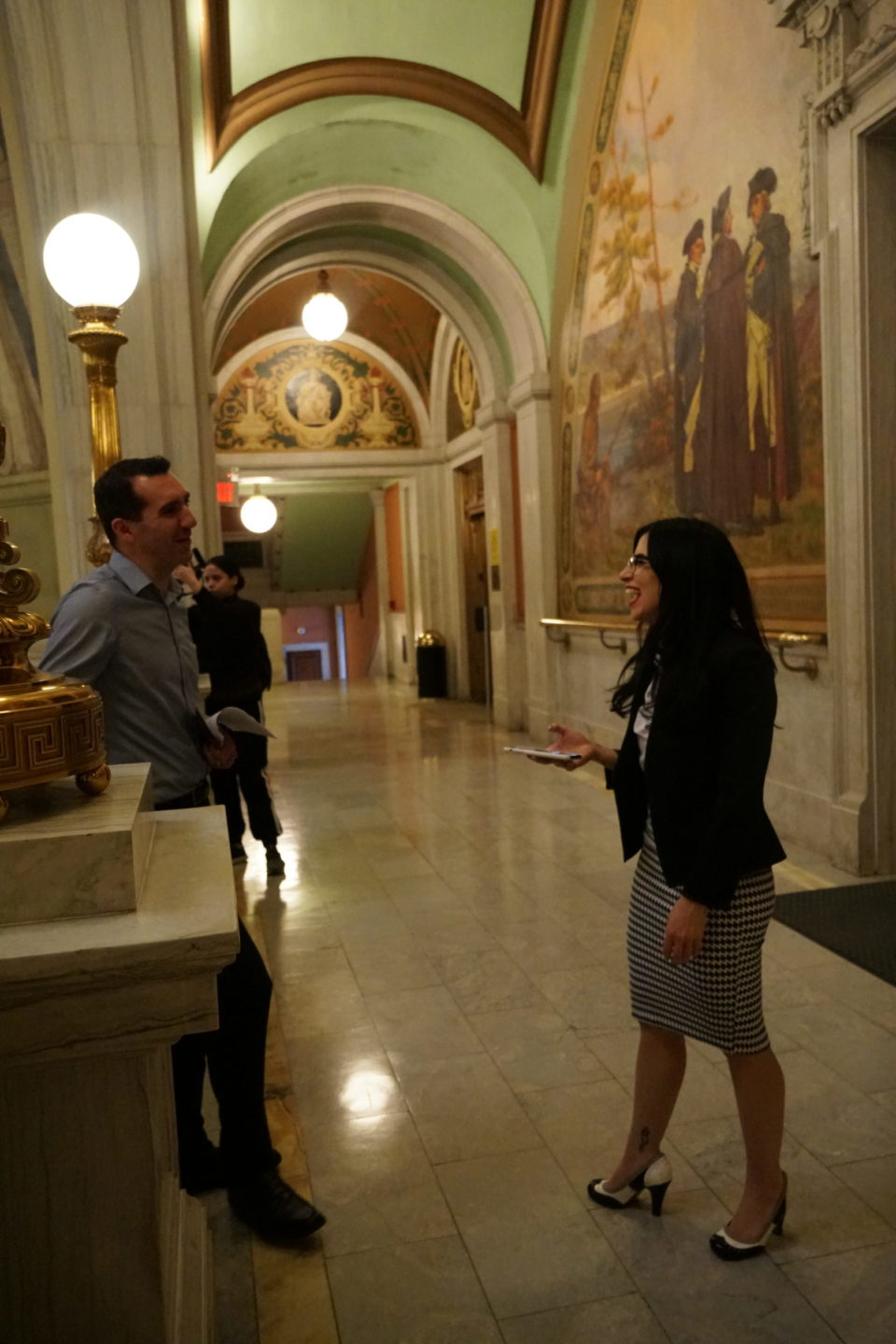 How many years did it take to build this?

Only about two years, which is pretty unbelievable.

In reference to busts: Who are all these people?

They are Alexander Hamilton, Secretary of Treasury; John Stevens of Hoboken and Stevens Institute, they were early settlers of Hoboken and he invented the steam ship; Richard Varick, early founder of Jersey City and former mayor of NYC; and Abraham Zabriskie, attorney and served as President of the New Jersey Constitutional Commission. 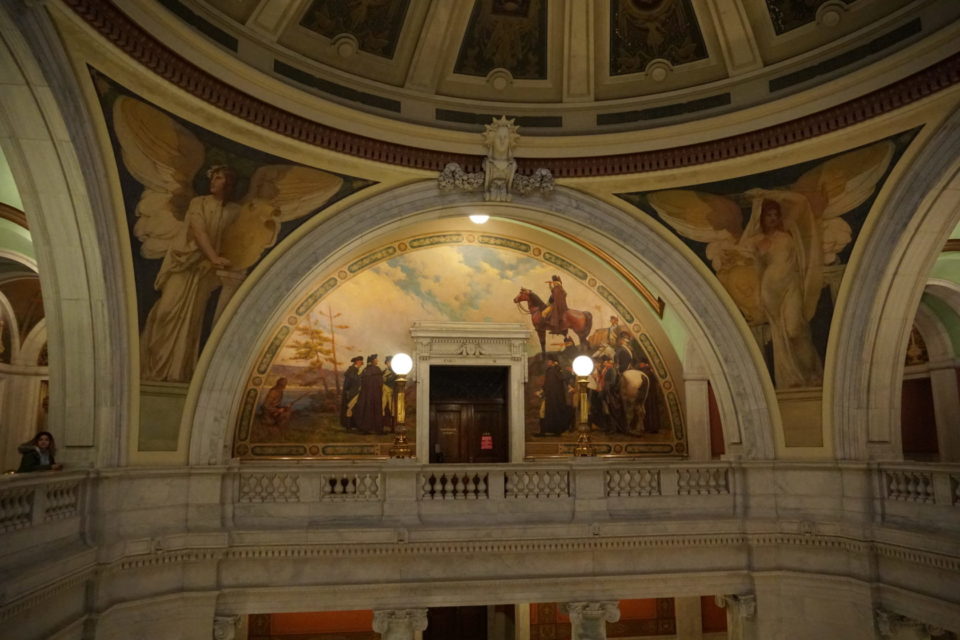 If you’ve been around Jersey City and Hoboken for a long time, you’ll recognize those names – Varick St is Downtown, Zabriskie is in the Heights. Hudson County history is pretty prevalent here. We try to keep it in people’s minds.

So cool. And you guys have events here, right?

Yes, we do a lot of events here. I know we do the Live at Brennan’s events, which are music events. We also concentrate on Flag Raisings for various multicultural organizations along with celebrations. With Hudson County being as diversified as it is, we cherish the fact that we are able to celebrate all cultures and organizations within the County. All events have increased tremendously over the past year. 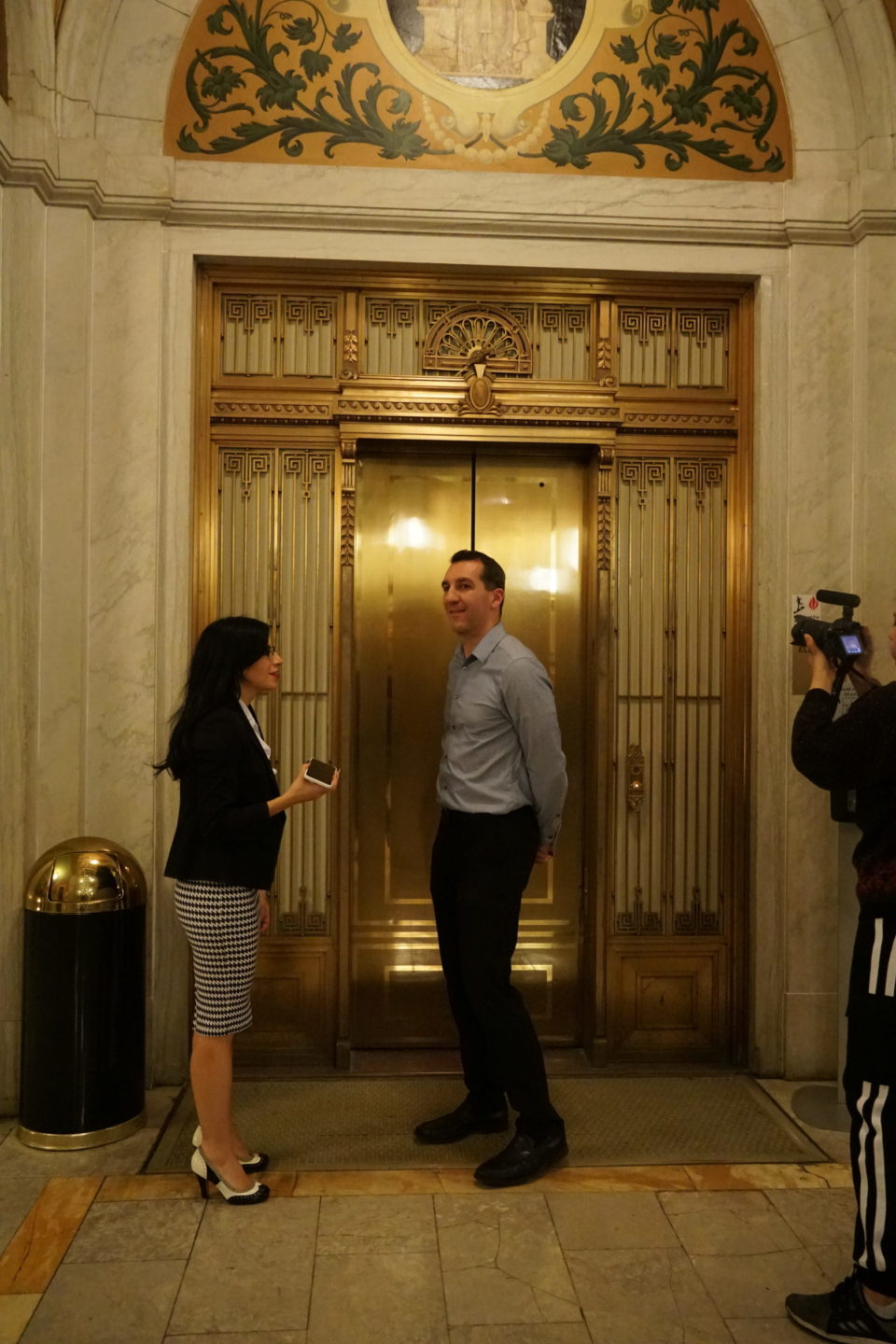 So can people book events here?

There’s a wedding taking place here, so you can book it but they’re not too keen on it. The price adds up, but it is really nice.

Can the public sit in on cases?

Absolutely. All the courts are completely open. You can come in your free time. 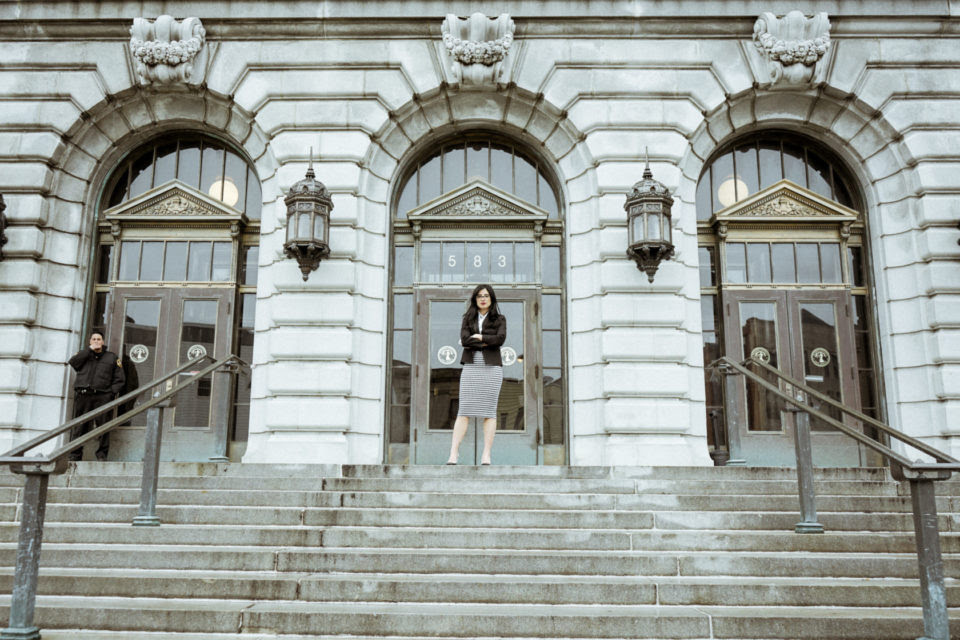 It’s not nearly as exciting as Law & Order, but you never know!

These murals are insane. And it only took two years? Wow!

This is of Robert Fulton’s first steam ship sailing up the Hudson, setting off to Albany. This was done by Charles Yardley Turner.

These murals were all restored. This is the Dutch paying the Native Americans for the land, which is what became Hudson and Bergen Counties. They paid in items including cloth, blankets, guns, brass kettles, and a half-barrel of beer. This was January 30, 1658.

You can also find the flora and fauna of what was in Hudson County at the time.

This is the elevator where they brought prisoners up in at the time. 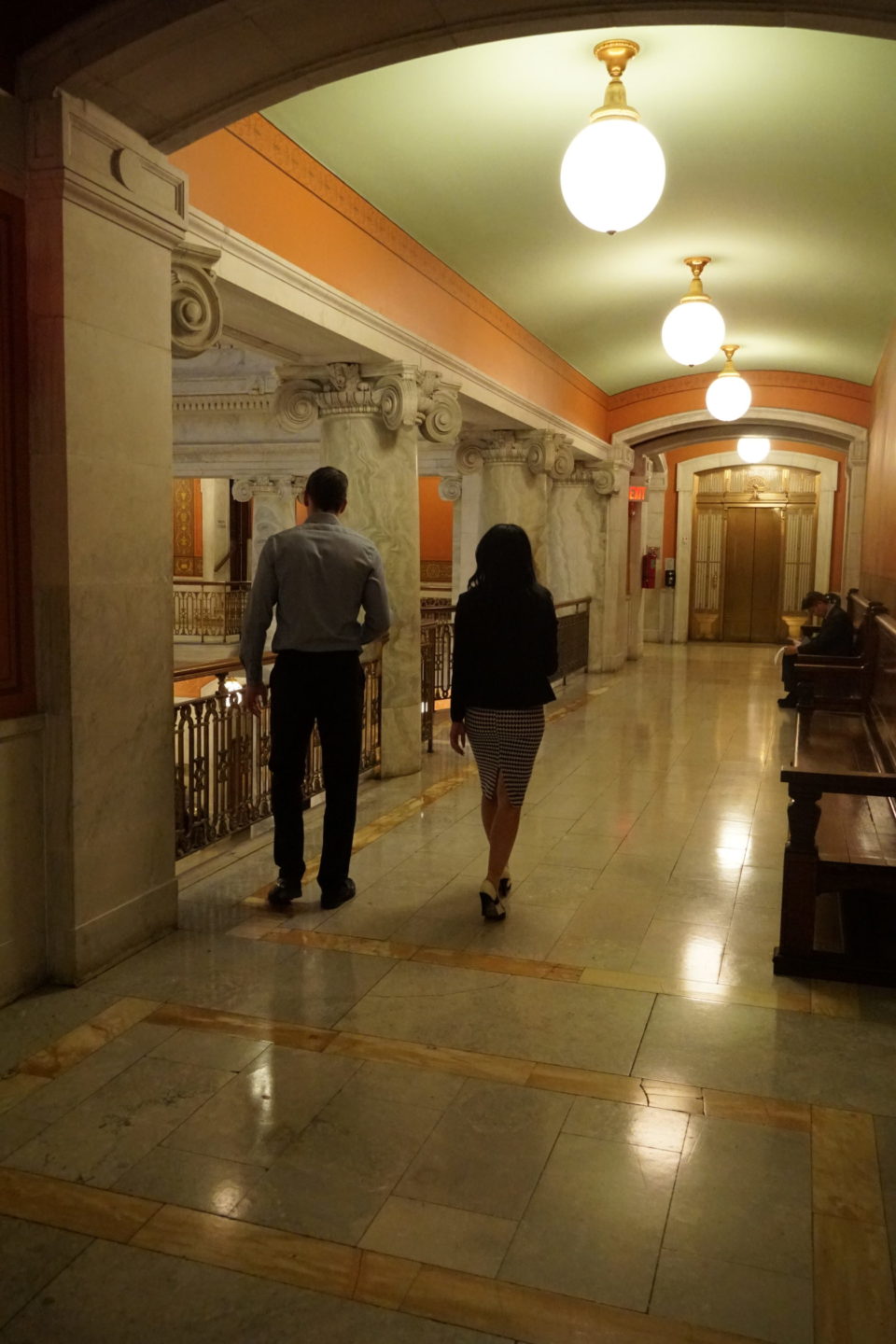 They kept them in the basement. They brought prisoners up here and brought them to the courtrooms on the second and fourth floors.

I can feel the history in here, the people who came here.

Especially on the front, you can see the wear on the marble from 100 years of use.

Not that I’ve found, unfortunately.

We have more art here. This is General George Washington in Fort Lee, overlooking the battles in Manhattan during the Revolutionary War. 1776.

This is the last mural, called The Repulse of the Dutch. They’re heading back to Henry Hudson’s ship and the Native Americans are not terribly happy about their arrival. 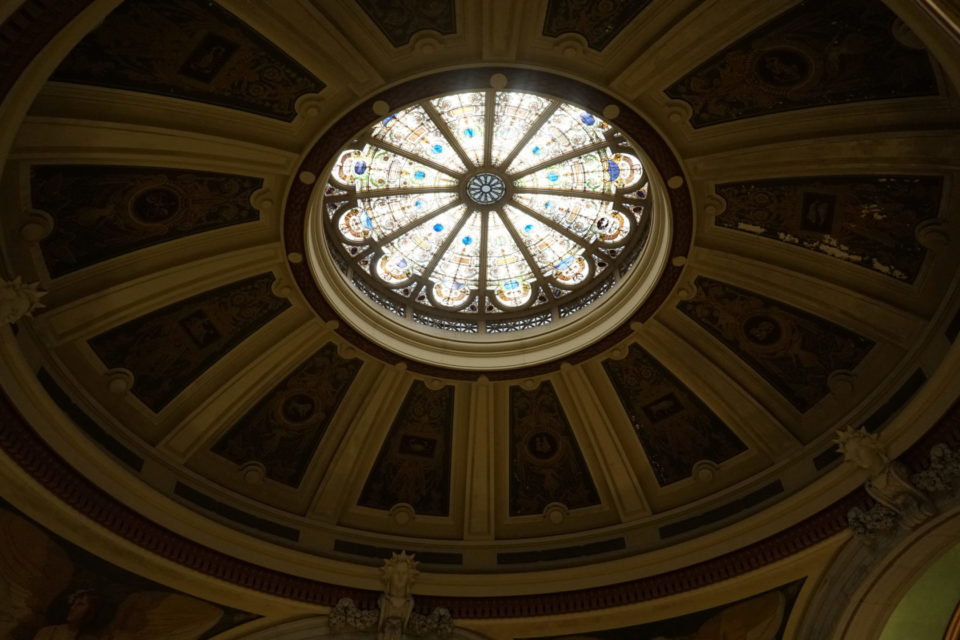 Up here, you get a nice view of the zodiacs, the bust of Lady Liberty, and the bronze stone.

There’s a few pictures on the first floor when they were beginning the cleanup. You can see that it was in disrepair. Down there is also the main space where we throw events.

It’s so nice and so impressive.

Yeah, we’re trying to bring more events to this space, it’s a really special space. the County Executive, Tom DeGise, is a big proponent for bringing events to the space. He brought the music events and want more things to happen here because it’s such a great space.

Anything else you want people to know?

The building is completely open to the public, so they can come in at any time during business hours to take a look at the building, step into the courts and check that out. Keep an eye out for new events happening in the year, like flag raisings, music events, and art installations.

Do you guys do official tours?

Yes, anyone can contact me for official tours. I’d be happy to take them through the building.

You can find more information about the Brennan Courthouse on visithudson.org/history.