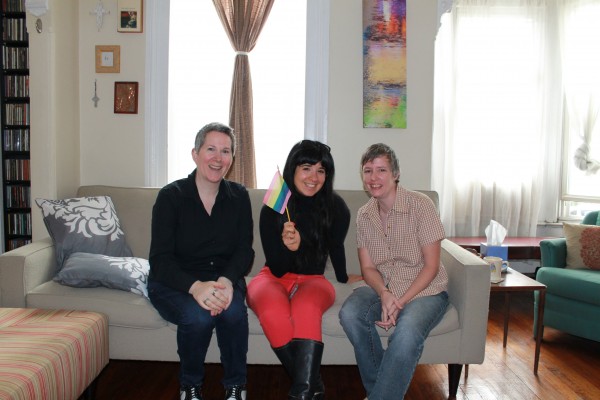 I’ve known Cat and Beth aka Lovey and Bubbala for quite some time now.  What always struck me when I saw them was how in tune they were with each other. They are just the most amazing people, individually and together. When I met with Eddie to brainstorm ideas for pride week, I immediately mentioned I wanted to interview Cat and Beth… I admit for selfish reasons, since I genuinely wanted to get to know them and hear their story. They invited me over to their apartment in the heights to chat and play with their kittens. #yesiwentthere 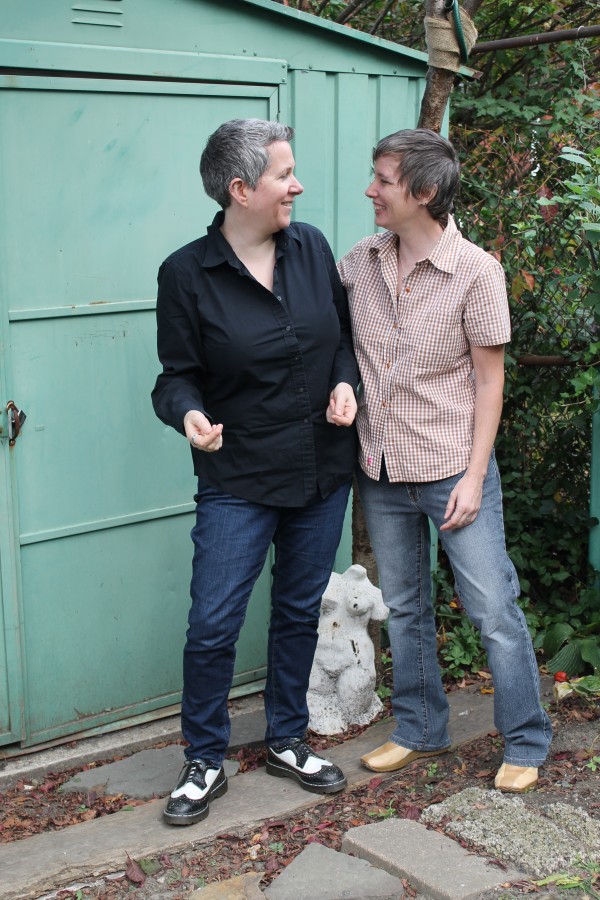 What are your names/nicknames? (Beth) My nickname is Bubbala and Cat we call lovey. We actually call each other lovey.

Why bubbala? My grandmother would call me Bubbala, it’s the grandmother jewish nickname for I love you, you’re cute sort of thing. I have two older sisters that are big into thrifting and antiquing, so they brought these big glasses for me. I put them on and then all of a sudden I was like “Dahling, what are you talking about…have a bagel”. That’s kind of how it started, and during Hurricane Sandy when we were stuck in the house. I was making these videos for Bubbala because people were stuck in their houses and I wanted to cheer them up. I made these videos every couple of hours and I would put on a stupid hat or something like that. 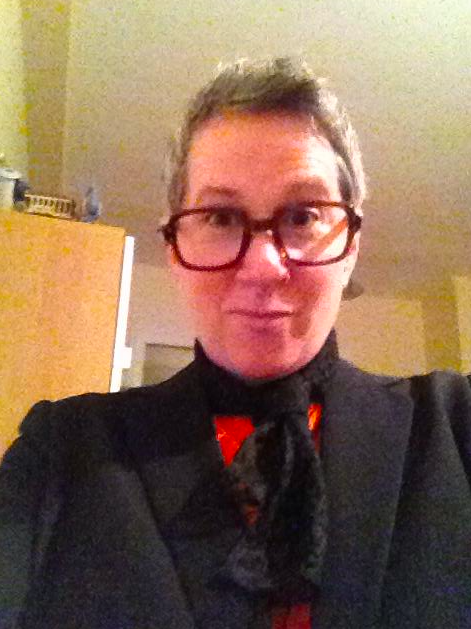 How did you guys meet? (Cat) We met online, in an AOL chat room! Neither one of us was looking for anything else but just a friend. I actually was in the chatroom and back then it was full of guys and crazy people and I was like “Are their any lesbians in this room?” and next to Beth’s name, she put a little arrow and wrote “raises hand” and I thought that was the cutest thing… then we started talking. This was 12 years ago.

Were you guys in Jersey City then? (Cat) I was here. (Beth) I lived in Maryland. 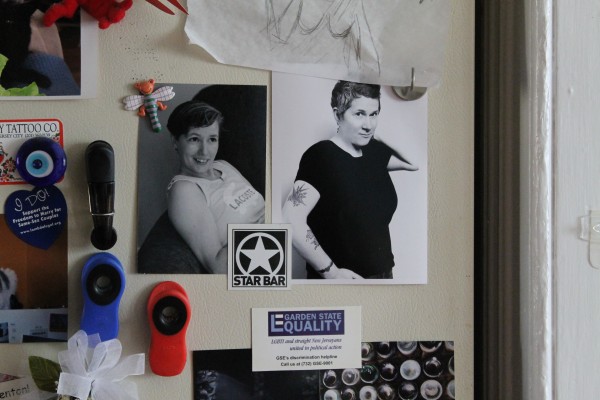 My hubby is from Maryland! So then what happened? (Beth) We chatted for a while, then started talking on the phone and then she came to see me in Virginia. (Cat) Then I said why don’t you come to Jersey City! She loved it here… so it made sense for her to move here. We lived downtown, she’s a photographer so it was a great opportunity for her to become the artist she always wanted to be.

Beth, Where do you work? Duggal Visual Studios. I am the manager of one of the photo departments.

Cat, What brought you to JC? I had two friends that moved here, so I came to see them and really liked the vibe. It was back when 111 was still active and I went to a few art shows… 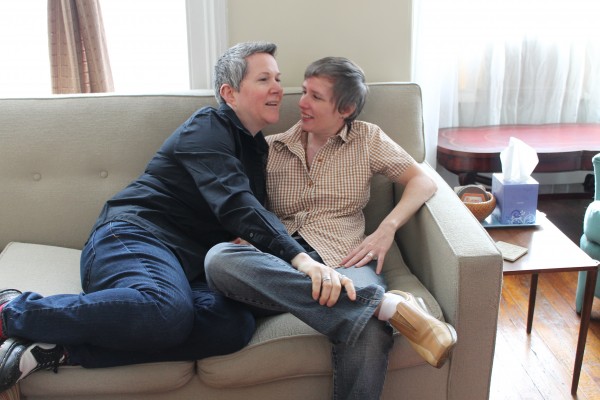 What is 111? It was a huge warehouse where artists lived and worked, a real arts enclave where a lot of public art shows and performances happened. Now It’s that pile of bricks down the powerhouse area… by the Warehouse Cafe. I started going to all these art events, I love art but was never able to interact with the artists in their space and I thought “how cool is this?!”. So I moved here?

What do you do now? (Cat) I am the publisher of the Jersey City Independent. I just started my own company it’s called Harmony Media and JCI will be underneath that. The sale is going through, it’s something I’ve been pursuing for the last two years. We are already working on the next issue…

Can you tell me more about your involvement in the LGBT Festival? I am one of the founding members with Paul and Miguel and Beth came pretty much the year after the first festival. At that time their wasn’t the community that there is now which is really hard to think about because it’s so different. A lot of people went to the city back then… so not like it is now. Paul and Miguel moved here and Paul is originally from San Francisco so for him it was weird to be at a place where there is no LGBT presence… so he and Miguel did those old fashion posters where you would rip the tab off… and I saw it and called the number. We met at Grace Van Vorst Church  and in their apartment, and in 3 months we put together the first festival. This was in 2001. 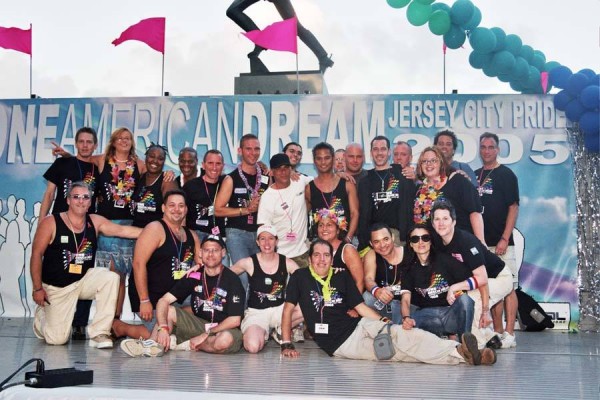 What happened after? Beth came on board, and she was the photographer, and so we started doing social events. We used to meet at Basic… we would have a “gay brunch”… There was a place called Collettas which is where the dopeness is now and this bartender there, you would’ve loved her, her name was Sandra and she loved everybody. As soon as we started putting together the Gay pride festival, we would walk in and she would introduce us to every gay person that she knew!

(Beth) They had a Will and Grace night!

(Cat) So that was the beginning of it… Eventually I became the co-chair, and was that for 5 years… Then other people stepped up and took it over. 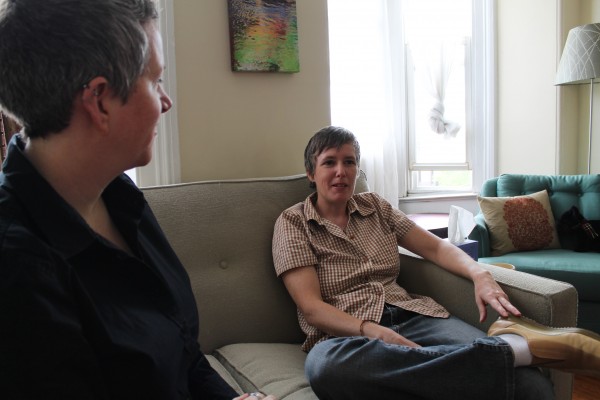 (Beth) I became the special events coordinator and I was also doing women’s outreach. We were doing events once a week almost!(Cat) During that time there was a lot of things that happened; The first time the gay flag ever flew at city hall was because of Jersey City Lesbian & Gay Outreach, I was actually involved in making that happen. We were very involved in marriage equality. I went to a lot of the initial meetings, I met McGreevy when he said there was no way he would ever sign anything that had to do with gay marriage. The most he would give us was domestic partnership which was very disappointing at the time but we pushed for it. Beth and I were actually the first to become domestic partners in Jersey City. 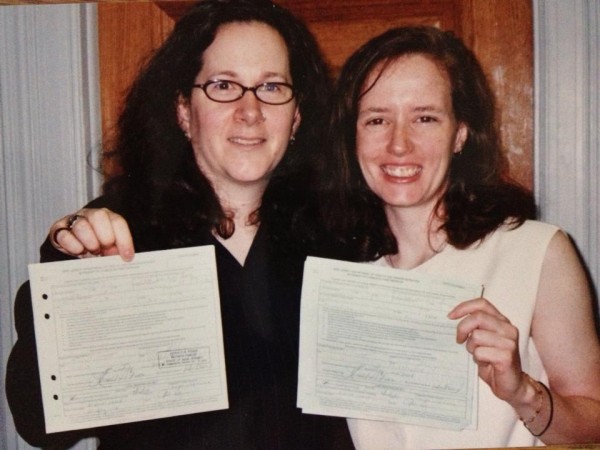 (Cat) So then after that it turned into civil unions. This month is the one year anniversary of marriage equality finally New Jersey got their act together… so we got married in March! We had a small get together down in Exchange Place with a few of our friends. Tony Frier who owns 9th and Coles is a notary and he signed our domestic partnership in 2004! He also can officiate services so he married us in 2014. 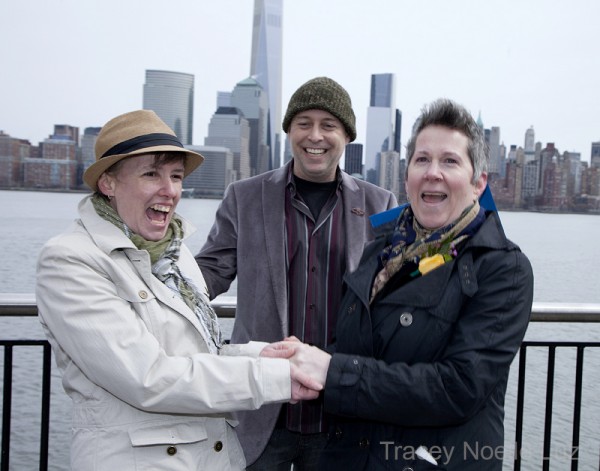 How did it feel to finally tie the knot? (Beth) Well it was great! We wanted to have more people, but time got away from us but maybe next March we will do something. We want a big dance party!

How do you feel about the way the community has evolved in JC? (Cat) I think Jersey City is unique… in alot of places it’s very separate. But here there are so many artists, I feel like the gay community is united… everyone is together. It’s not as important to have a gay hangout spot… there is Pint which is gay friendly… but its more of a craft beer bar which is open to everyone. We kind of flip it around here, and its inclusive. Everyone is accepting here, you can be yourself anywhere you go… 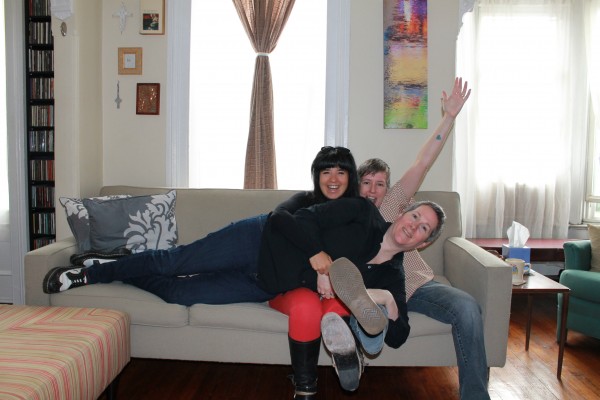 What’s your favorite Jersey City hangout spot? We like Barcade! We love the games and the beer. You have to have a shot of Barenjager it’s this honey liquor that goes really well with the beer. We also like Skinners, Merchant and LITM…We’ve gone to the Trolley bar a few times.

What’s the secret to a successful relationship? (Beth) A lot of people want to think about Gay people in the bedroom.. but we have all the same issues as all marriages. I think we just keep evolving… everyone says communication is key which it is! 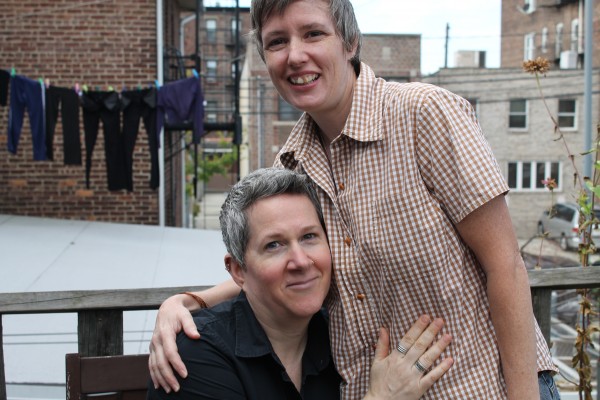 (Cat) I think what it is, you have to be aware that your partner is someone else, that comes with all this other baggage and all this other life experience. When you get into a relationship you think that this person is going to mirror you but that isn’t the case! Their experiences leads them to think in ways that you don’t. Part of the challenge is to also not let things fester.