Meet Jen and Kevin Burke and their sons Emmett and Logan. They’re renovating a 1800s row house in the heart of McGinley Square, an area they’ve fallen in love with.

The Burkes have been Jersey City locals since 2004 when they moved into Harsimus Cove, back when their block had an escort service and a true biker bar. “I still haven’t met the author of the laminated sign that requested the ‘poop scooping Starbucks drinking yuppie scum that moved to Jersey City to please go back to Hoboken,’” said Jen of their old stomping grounds.

They immediately fell in love with Jersey City, the community and the neighborly vibe. Eventually though, the Burkes expanded their family and they had to move on from their Harsimus Cove home in 2013. But last year they embarked on the daunting, exciting, rewarding, labor of love task of renovating a deserted row house in McGinley Square.

What made you choose McGinley Square?

“Honestly we were very unfamiliar with it, I don’t even think we had ever heard the term ‘McGinley Square’ – we were just looking all over Jersey City and as everyone knows, the prices are insane,” said Kevin.

“We’re both first generation Irish immigrants. My father in law has been renovating houses for 40 years, he apprenticed as a carpenter when he was 12 or 13 years old,” explained Kevin, so needless to say “we’re less phased by construction work than most people. It’s to my benefit and my detriment that my family thinks we can do everything ourselves.”

What it came down to was that “this was the house we could afford and we thought we could do the work. We enjoy it… to a certain extent,” said Kevin.

“It was from there that we discovered what a great neighborhood this is.”

Tell me about the beginning of your renovation:

The Burkes purchased their row house in July 2016 but the squatter situation immediately proved to be more tricky than they anticipated.

“There was a guy actively living here,” said Kevin, “and instead of using the bathroom in the backyard, he would just clog the toilets.” Kevin explained that the first few weeks of renovations was “a lot of biting your tongue and shoveling.”

Then came the flea infestation that took two months to remedy. “You’d walk downstairs and feel them jumping on you,” said Kevin.

How much of the work have you done yourself?
“I did all the interior renovations except for the trades like plumbing, electrical and HVAC, which was all done by local contractors” said Kevin. “But we were here stripping the floors and dry-walling. We changed the layout and added a level. It was fun… but I’m glad it’s over.”

Tell me about some of the things you uncovered during renovations:
“The contractors found a gun from the 1920s in the walls,” said Kevin.  “I didn’t even know if it was real at first. It was heavy but covered in a cheap aluminum.”

“A friend advised me to take it to the police so I brought it down to the station in a brown paper bag,” explained Kevin. But the mood switched as soon as he told the front desk he had carried an unlicensed fire arm into his local precinct.

Lieutenants came down with handguns out to take him to the back room and he immediately thought “this was a bad idea. Am I going to be asked a few questions or am I going to be locked up?” thought Kevin.

“Sure enough, we learned that one of the original owners of the house had a license for a handgun in the 1920s,” said Kevin. They decommissioned the gun at the station but Kevin had dreams of putting it into a shadow box frame and hanging it as a conversation piece. “When I asked the officers what my chances were of getting the gun back, they just told me to get out of there,” said Kevin.

They also uncovered hidden dumb waiters and newspapers from the 1950s that were used as wall insulation.

Tell me about some of the interesting details of the house:

“We salvaged all the giant pocket doors and cast iron hinges that we could,” said Kevin. We also refurbished the original heart pine flooring.”

“You can see the history of building construction and fire code evolution in this house,” said Kevin. “All the corner pieces have tenon and groove joists, sort of like an Amish barn, and the house was built was dimensional lumber 2x4s.”

“There a time period where they went from hand-hewn timbers where you can see the axe marks to dimensional lumber where a 2×4 was actually two inches by 4 inches to now where it’s nominal so a 2×4 is an inch and a half by three and a half. 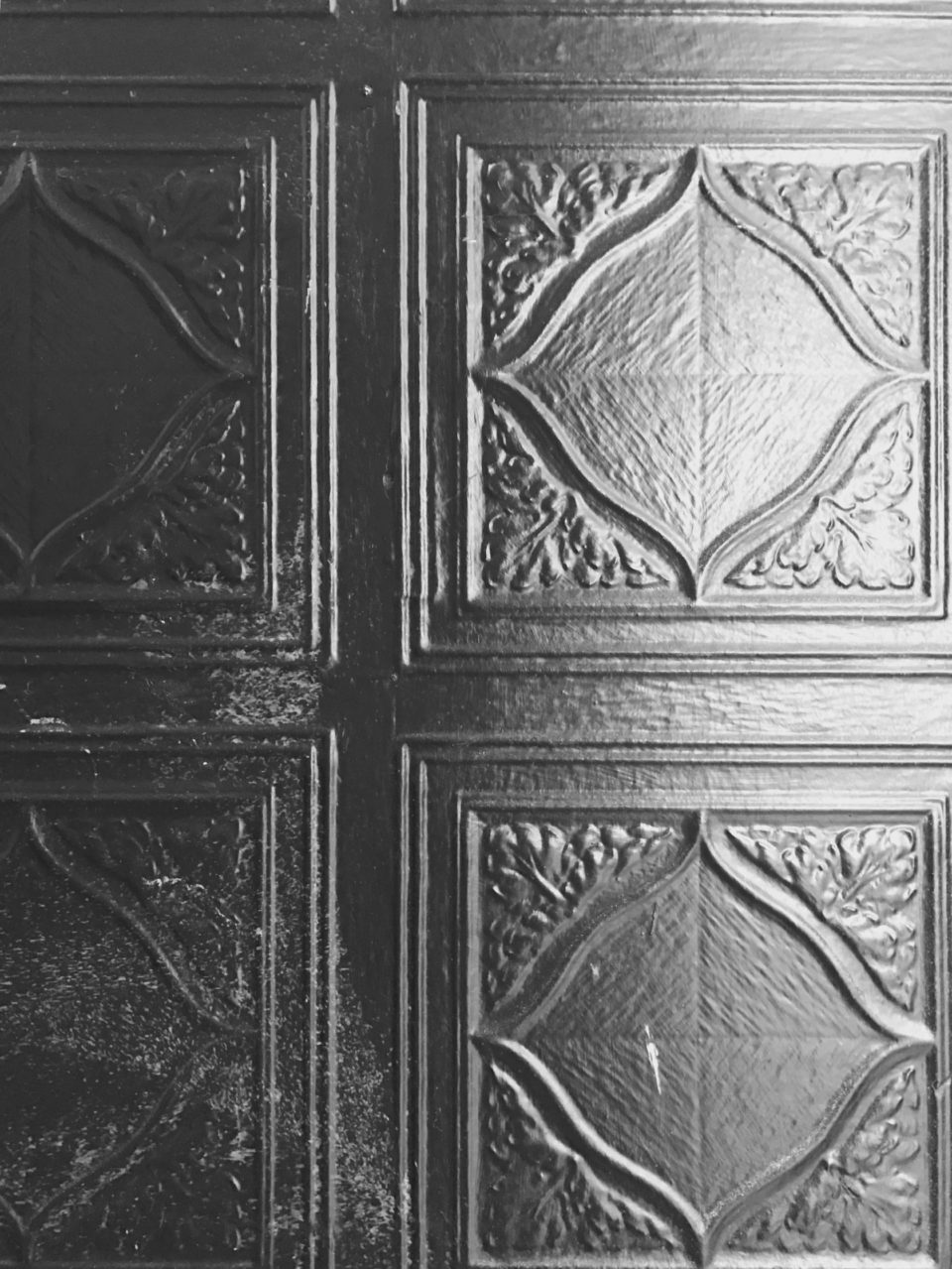 Another interesting quality of the house is that “in the 1800s they used to do balloon framing, where the four corner studs would go all the way up the height of the house,” said Kevin. But “the fire codes have changed since then and now houses are required to install band joists (a board that caps off a floor stud)  to delay fire from traveling upwards as quick as it did when it was all one piece of wood.”

What do you love about McGinley Square?

“We are finding that sense of community in our new house in McGinley Square,” said Jen. “We are back into the old groove. Everyone says hello and stops to chat, even if they don’t speak your language [and we have a] neighbor growing 80% of his produce in his backyard. New places are starting to open up [including] two new bike shops, the best pawn shop I have ever window shopped in, a handmade chocolate store, Venezuelan cuisine, Uzbeki cuisine, and a jazz bar. McGinley Square used to be the most desirable part of Jersey City and I think we will be getting back to that very soon!”

“Everyone is really friendly and the local bartender has great stories about Jersey City politics,” said Kevin. “That’s not what necessarily drew us in the first place,” said Kevin, “it’s what we discovered afterwards. This was a happy accident for us.”