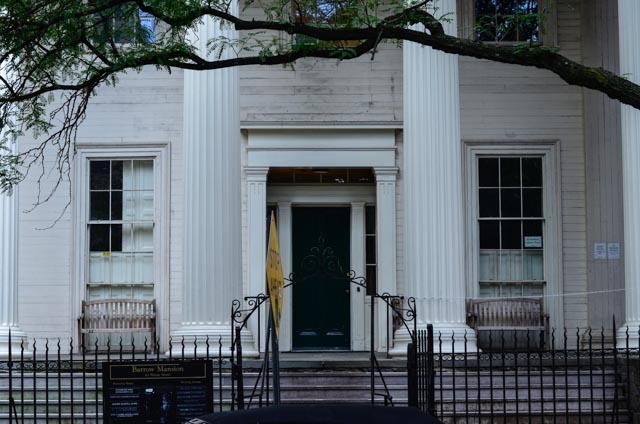 Ever since I moved to Downtown Jersey City, I always wondered what the story was behind the historic-looking home on Barrow Street. Around two years ago during the Jersey City Studio Tour, I had the chance to get a quick tour. As soon as you walk in, you feel the stories, the history, and the memories that were made in this building. I obviously needed to find out more.

Fast forward to a few months ago, I finally reached out to the people who manage this historic residence to get a tour and hear the whole story. It was MTV Cribs meets the History Channel. 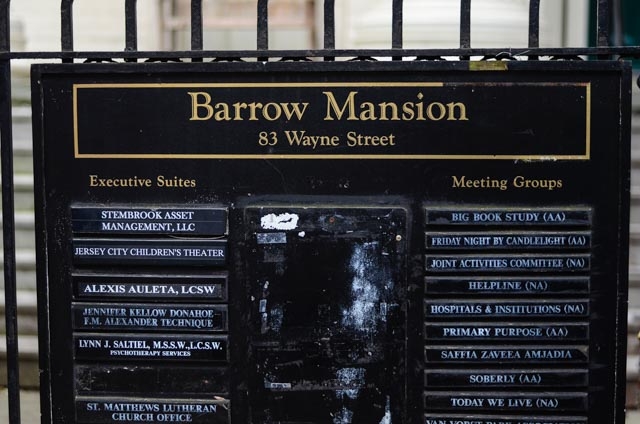 What are your names?

What do you guys do?

Can you tell me more about Barrow Mansion?

There are five phases to the history of the Barrow Mansion. The Van Vorst period started in 1630 when Cornelius Van Vorst “The Elder” established a homestead about a hundred feet up the street at the top of the hill. In 1837, began the residential period, which is when the Cornelius Van Vorst “The Builder”, decided to develop their farm, which made up most of what is now downtown, into an urban community.  He established a street grid, divided up the land, and started selling off the lots.  He and Dr. Barrow built two identical mansions that they hoped would be examples of a New York suburb.  Dr. Barrow  and has wife lived in one and the Van Vorst family lived in the other 50 feet to the West.  The next period began in 1900 when the  YMCA bought the Barrow Mansion and converted it to serve the many single working men that began flooding the city. In 1907, the St Matthew’s Lutheran church bought the Mansion and the garden between the two mansions so they could build a new bigger church. The current period began in 1982 when the church formed the Barrow Mansion Development Corporation – a nonprofit corporation that runs the building as a community facility. 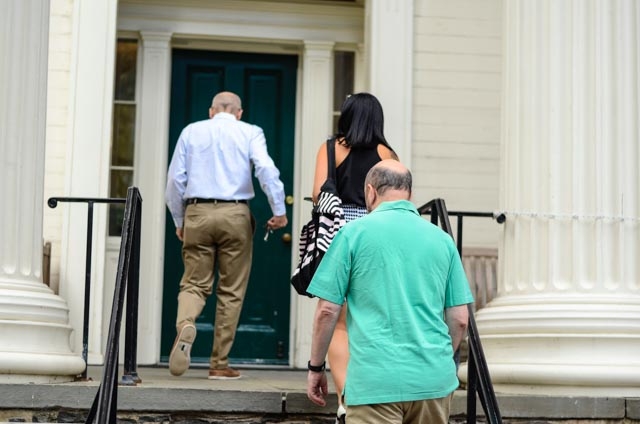 Gerry: Doctor Barrow was married to Eliza Brower, the sister of Cornelius Van Vorst’s wife, Sarah. He was a prominent New York physician who, with Cornelius, build the mansions. The Dr. and his wife had no children, but the Van Vorst family had many children.  The Doctor purchased the land shortly after Sarah passed away.  Eliza had close connections with the nieces and nephews throughout her life.   It is thought that one of the reasons the Barrows moved from New York was to help take care of the Van Vorst children.

Architecturally it’s in Greek Revival style, which is very much based on symmetry.  The Mansion deviates from this rule in that it has five columns creating four bays.  Typically this style would have equal sides off the center hall.  The Mansion has a double bay on one side and a single on the other side. 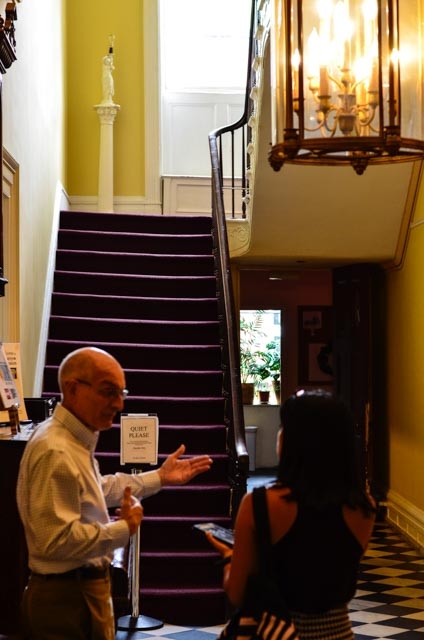 Gerry: This is where the Doctor would entertain. Typically, when they entertained, they would have dinner in the back parlor. After dinner, the men would retire to the front parlor and have drinks and cigars.

Going back to the symmetrical theme, the front door in the front parlor is a fake. It never went anywhere. The reason that is there is because there’s one in the back parlor at that location.  To make the rooms symmetrical, they added a matching door.

I love all the moulding.

Gerry: That’s original, and the fireplaces are original. The mirrors were added by a later owner, so they’re not original to the building but contribute to the building’s history. The sconces were probably changed after the Statue of Liberty was built in 1886 as suggested by their similar tiara’s and outstretched arms holding the flame. 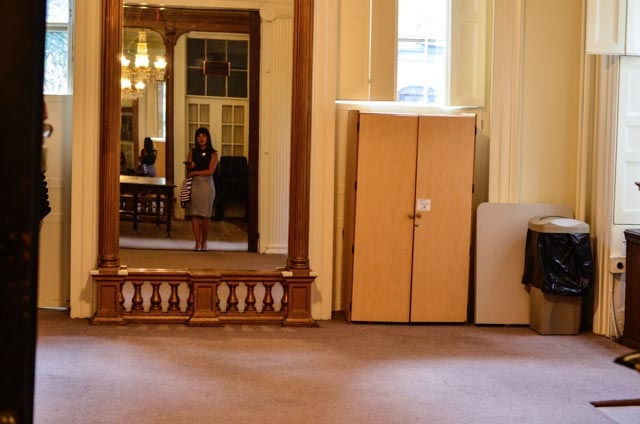 So what is this space?

Gerry: When the YMCA bought the building, they added a gymnasium. Note the siding on the back of the original building. These are windows like those in the front. Originally, they were triple hung windows, which are windows with three sashes. Rather than be doors, you could lift two up and walk out.  Originally, there was a porch back here. When the YMCA added this gym, and it went down another story. The church put this floor in to make building more functional.

What is it now? 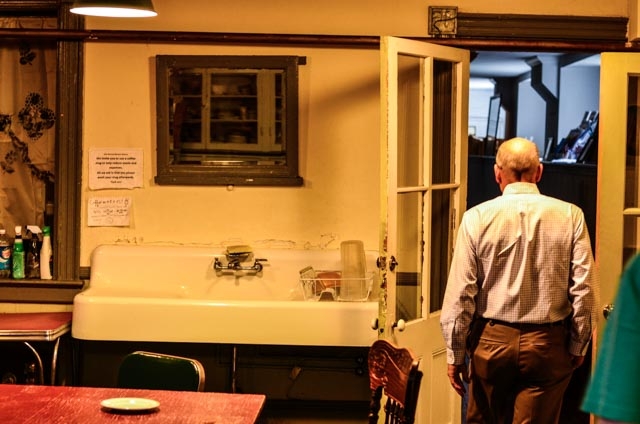 Gerry: When the Doctor lived here, this stair to the basement was not here. It was added by the YMCA.  There was a butler’s pantry in the corner room with a small stair to the basement. Servants would bring the food up, plate it, and then go through here to serve it in the dining room.

Look at this kitchen!

Gerry: When the Doctor lived here, he typically had six servants according to census tracts. There was a head cook, an assistant cook, a chamber maid, a male servant who probably attended the grounds, and there always seemed to be a child. When they cooked, they used the two fireplaces. Their culinary style typically had a roast and a stew because of the difficulty in controlling the temperature with an open fire.  The addition of the coal oven by a later owner opened up many other cooking flexibility.  The gas Garland range was added by the church for its many social events.   When the YMCA was here, this was a locker room.

Do people still use any of these?

Gerry: The Garland is fully operational. The coal oven works, but it’s very difficult to use. 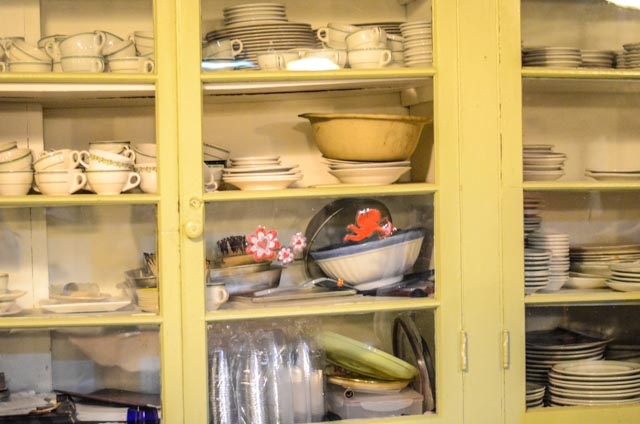 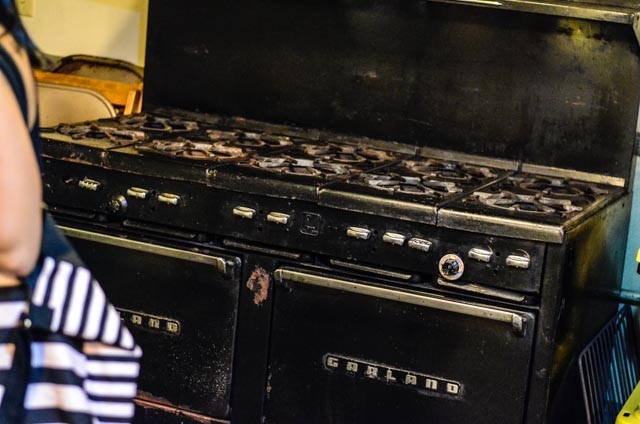 Gerry: This room is used for meetings. We have over 1400 meetings a year. That’s about four meetings per day. AA, NA, Neighborhood Association meetings, meditation groups. There were two today already, and there’ll be more tonight. The upstairs parlors are also used for meetings.

Gerry: This connection was added later by the Barrow Mansion Development Corporation for functionality and fire egress. Over the last 15 years, we’ve raised almost 2 million dollars toward improvements for the building. It now has modern plumbing, electrical, fire protection, and heating systems and most of the building is air conditioned.  I like to say that if it doesn’t look like we spent 2 million dollars then we did it right. We tried very hard to make the necessary changes in a manner that had the least impact on the historic building. 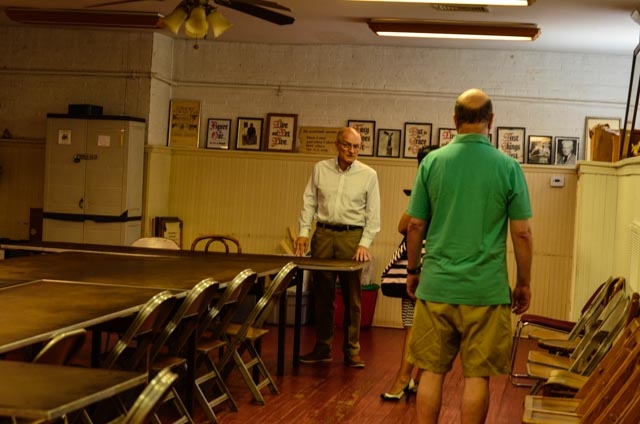 It’s very cool. Where are we now?

Gerry: Now, we’re under the porch. Columns are on this wall, and the front door is above that door. When the Doctor lived here, the servants would bring supplies through the doorway on the end. It was like Downton Abbey, where the servants were mainly downstairs and the master of the house mainly on the first and second floors. Downstairs was the working floor. The main floor was the entertainment floor. The second floor was the chambers or bedrooms. The top floor, the attic, is where the servants lived. 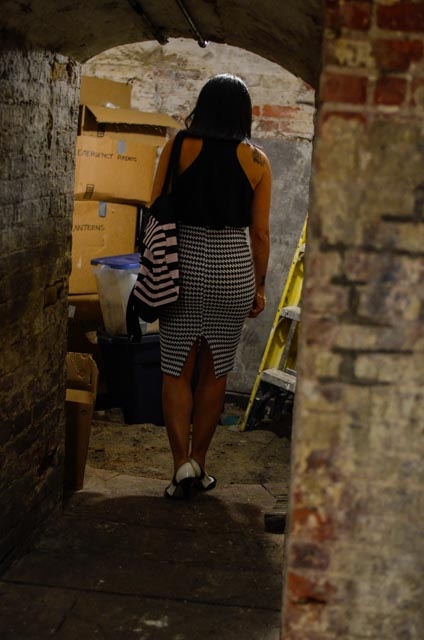 It’s such a small space.

Gerry: During Superstorm Sandy, the Mansion was the headquarters for the relief and recovery group that was spontaneously begun by four neighbors. Hundreds of volunteers came to organize and distribute donated supplies. We had someone from Texas sign us up for an Amazon Gift Registry and people all over the country would send stuff. We had two completely full UPS truck deliveries every day.  The Mansion was stacked with stuff. 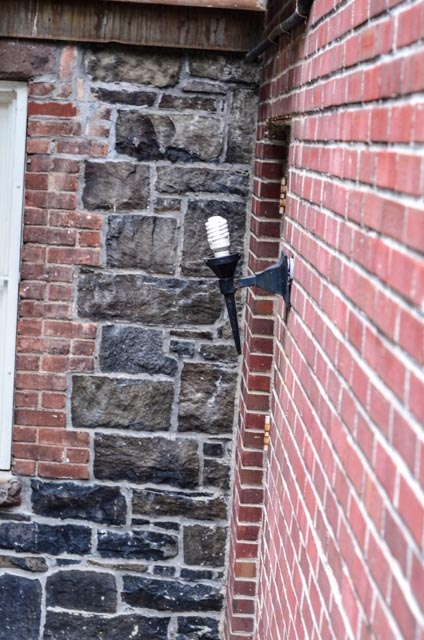 Wow! And how long have you been managing this building?

Gerry: I’ve been involved with the mansion for 25 years.

How did you start?

Gerry: I’m a member of the church next door, who still owns the building. I happen to be an architect, so they appointed me to the board of directors. At that point, the building was in pretty rough shape. It was basically unusable. I’ve been on the board for a long time. Now I run it with Jim.

Gerry: Yes! It’s currently used for special events. There are limited times you can use it because the building is so active and bowling is so noisy, but it is functional. Not in the best shape, but it can still be used.  It’s restoration high on fundraising list. 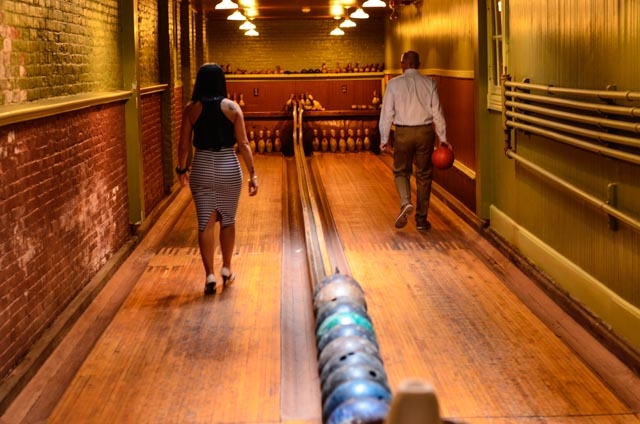 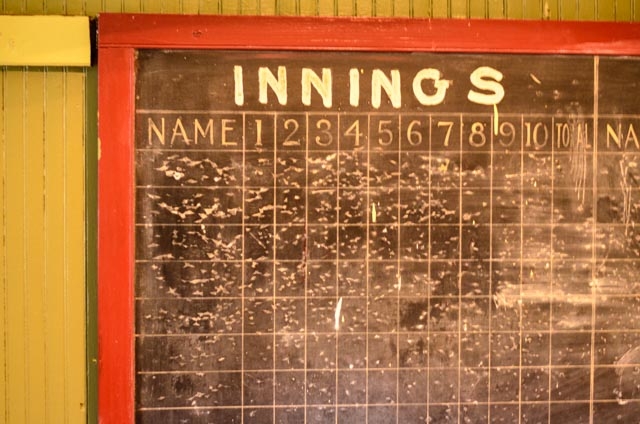 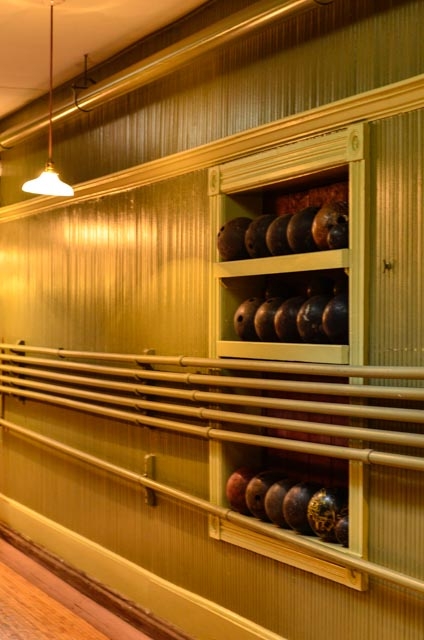 They have offices upstairs?

Gerry: Yes. The second floor, where the bedrooms were, is now used for offices. The are almost as elegant as the first floor including marble fireplaces.  The top floor is also divided into offices.

Do you have any future events we should look out for in Barrow Mansion?

Gerry:  Just had our 7th annual International Potluck Dinner outside on the porch.  It was co-sponsored with the church. Everybody brought a dish from their native origin and it was free to the public.  We are planning of second annual holiday party for December that will be co-sponsored by the Van Vorst Park Association.  The VVPA sponsors several events throughout the year.  They really know how to throw a party. 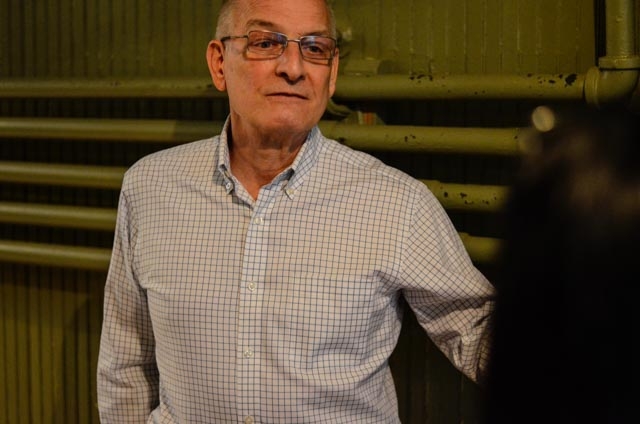 Are both of you from Jersey City or live here?

Jim: I live in Manhattan.

How long have you been in Jersey City?

How do you feel Jersey City has changed?

Gerry: It’s certainly changed dramatically in the past 30 years, very much for the better, it’s been almost revolutionary. 30 years ago, it was not bad.  I’ve been told that 50 years ago, it was so bad and you couldn’t go out at night. When I moved here, I was in Paulus Hook, which is a much quieter area. It was never bad, from what I understand. It was active from the factories, then desolate and now built up. The Van Vorst Park area went through a transition from good to very bad to good to very good. It’s been a dramatic change. 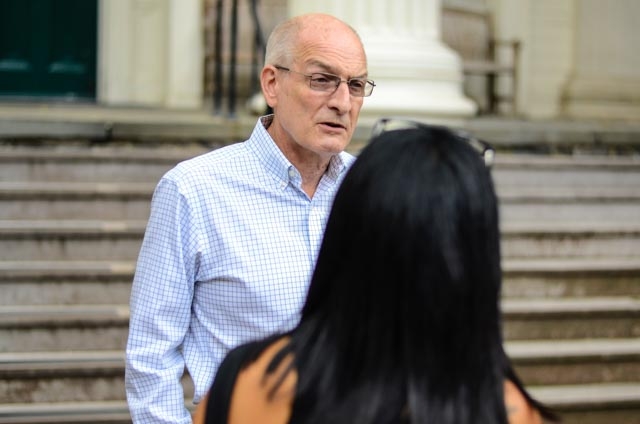 Do you guys have any Jersey City hangout spots?

Gerry: I go to Park & Sixth often because that’s pretty close to where I live. PJ Ryan’s is another place I enjoy. There are several around here.

How can people find out more about the mansion?

Gerry: Our website is the best place to go to: www.barrowmansion.org