Meet Patrice Hannon; Jersey City native and author of the new book Black Tom: A Novel of Sabotage in New York Harbor, based around the true story of the 1916 Black Tom explosion in Jersey City.

She grew up in The Heights, attended Saint Nicholas School and remembers her father’s stories about the Black Tom explosion, which happened when he was five years old, and inspired her to write a book that merged fact with fiction. “I wanted my research to absorb itself into the story,” Patrice said.

During the early 1890s, the “island” of Black Tom was really a pier made of landfill that stuck out of the Jersey City waterfront near Greenville. It was owned by the Lehigh Railroad Company and was originally used as a shipping depot and then during World War I as ammunitions storage.

“There is some controversy about naming of the island but one account is that there was a dark skinned fisherman who lived there before it was purchased by Lehigh Valley Railroad or used an a munitions depot,” explained Patrice. “Another story is that the outline of Black Tom island resembled a tomcat with its back arched.”

As a major munitions depot during the war, its purpose was to store and supply weapons to the United States’ allies overseas. The Germans got wind of this and sent secret agents over to obstruct the production and delivery of the weapons that were going to be used against them.

Frank Hague (who became Mayor of Jersey City the following year, in 1917) complained about the loose conditions of the storage on Black Tom island before the explosion happened,” said Patrice, “but there was too much money to be made from arms traffic for it to be regulated. German spies were known to be casing the place and they bribed the guards to tell them about location storage and movement of all the weapons. They had very little trouble sneaking in and planting dynamite.”

In the wee hours of Sunday, July 30, 1916, the Germans succeeded in their plan to sabotage the United States weaponry supply. Locals reported small fires on the pier after midnight and at 2:08am the first of many massive explosions set off.

On that night the barges and freight cars on Black Tom island housed over two million pounds of ammunition including black powder, TNT and dynamite.

“The explosion was tremendous,” Patrice explained. “People felt it all the way in Philadelphia and Baltimore. There were so many windows broken between Jersey City and lower Manhattan that there wasn’t enough plate glass in the country to replace it all at once. It registered as a 5.5 on the Richter scale.”

Shrapnel lodged itself into the Statue of Liberty, immigrants coming in through Ellis Island had to be rerouted and the Brooklyn Bridge shook. The damaged was estimated at $20 million (or $454 million today).

“This was the principle terminal for arms traffic to allies and this rocked the whole area to its core,” said Patrice. “It looked like a war zone.”

Though the explosion was immense, the death count was relatively low; historical records debate the exact number but it’s never more than 10.

“What’s really striking about that night is the heroism by first responders who rushed down to Black Tom,” said Patrice. “The civilian navy and tug boats began pulling barges that were on still fire away from the shoreline with explosions and shrapnel shells blowing up everywhere.”

Frank Hague had the presidents of the storage barges, including the Lehigh Valley Railroad Company and the Central Railroad of New Jersey, arrested citing the law that it was illegal to keep ammunitions stored overnight. They were quickly released and nothing came of their indictments but Hague pressed the Chief of Police to stop all incoming trains and search them for explosives. Nevertheless, “Black Tom was back up and running as a munitions depot in a very short amount of time. There was just too much money to be made in arms traffic,” explained Patrice. 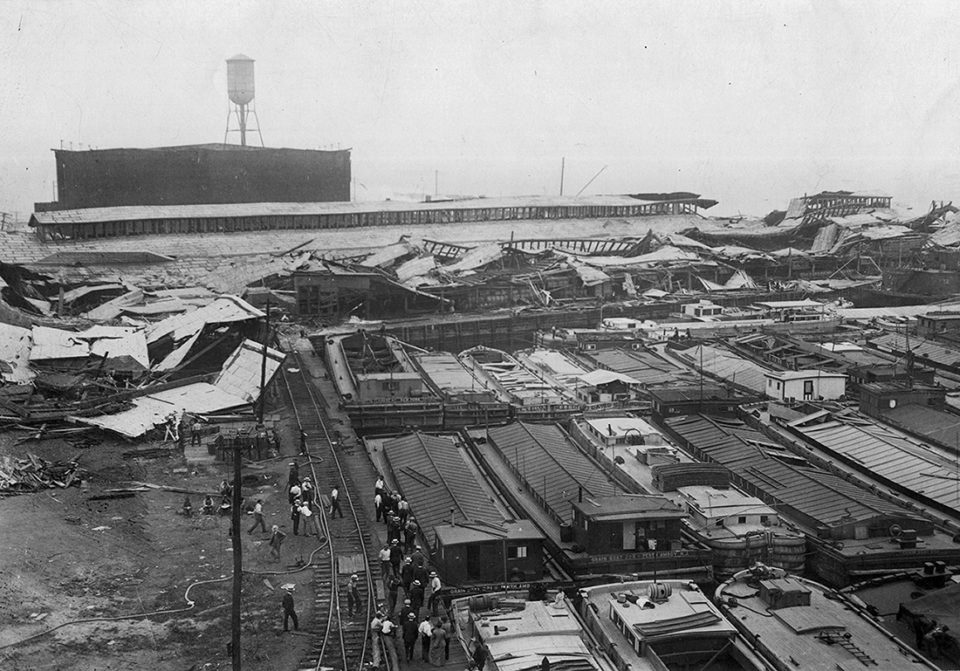 Landfill projects eventually made Black Tom Island part of the mainland of Liberty State Park, but the former spot of the explosions is at the end of Morris Pesin Drive in the southeastern corner of the park. A plaque and circle of American flags marks the spot.

To set the scene of World War I, Patrice’s book picks up in 1915 at the RMS Lusitania and focuses on an Irish family living in Jersey City. Patrick Kelly is a police officer and he and his brother end up down at Black Tom island the night of the explosion. “[The book] includes several non-fiction accounts but I’ve always enjoyed when history is dramatized… this is the page-turning narrative of that night,” said Patrice. The book includes many historically accurate details and landmarks of the time such as the local baseball team; the Jersey City Skeeters, City Hall, the Majestic Theatre, West Side (now Lincoln) and Van Vorst Parks, the Holy Name Parade and the rise of Frank Hague.

You can buy Black Tom: A Novel of Sabotage in New York Harbor at WORD Bookstore in Jersey City, Little City Books in Hoboken and on Amazon.

About Patrice Hannon:
In addition to Black Tom: A Novel of Sabotage in New York Harbor, Patrice is the author of Dear Jane Austen: A Heroine’s Guide to Life and Love and 101 Things You Didn’t Know About Jane Austen.  The last won the Jane Austen’s Regency World Award for “Best New Regency Know-How Book,” presented by The Jane Austen Centre in Bath. Patrice holds a B.A. from Saint Peter’s College and a Ph.D. from Rutgers University, both in English. During her nine years of full-time college teaching she taught Austen’s novels and the works of other great writers to hundreds of students at several colleges, including Rutgers, Vassar College, and The Richard Stockton College of New Jersey. She has also taught literature classes at Makor, a branch of the 92nd Street Y in New York, and at The Morgan Library, where she was invited to lead the museum’s first reading group, initiated in conjunction with its stunning exhibition, “A Woman’s Wit: Jane Austen’s Life and Legacy.”

Patrice has also published essays on Austen, Dickens, Wilde, and Tolkien, in addition to short fiction. Among her publications in nineteenth-century British literature is an article on film adaptations of Austen’s novels that appeared in Persuasions: The Journal of the Jane Austen Society of North America. Patrice is a member of JASNA (New York region) and has been a featured speaker at the meetings of several regional chapters. She has lectured on Jane Austen at The 92nd Street Y. Patrice is also a member of the Authors Guild. Originally from New Jersey, she now lives in New York City. Although Patrice appreciates Henry Tilney’s wit and Mr. Darcy’s wealth, her favorite Austen hero is Captain Frederick Wentworth—a preference that exposes her as a romantic despite a thorough understanding of the dangers of romanticism.