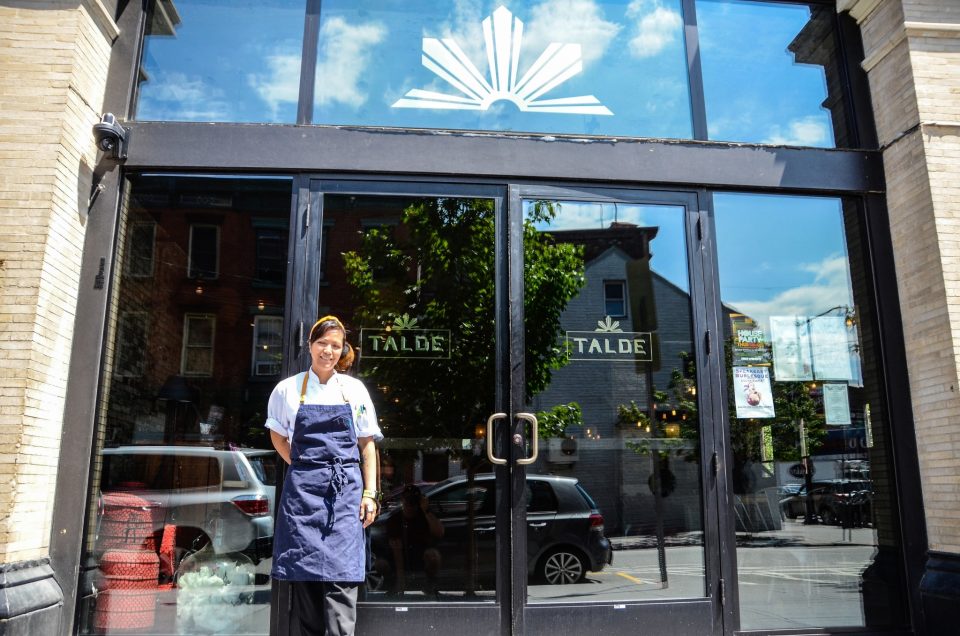 This post is so exciting for me! I never thought in a million years that my job would consist of having lunch with an executive chef at one of the best restaurants in Jersey City, Talde. I’ve been eating here since they opened and have grown very fond of the people who work there and their food. I dream about their wings and baos.

After a night out a month ago at Miss Wong’s, a party spot located downstairs inside Talde, I sat down with Chris – he manages Talde – and Chef Scott, and we chopped it up. They told me I had to meet Chef Ruby, who was just promoted to be the executive chef of Talde Jersey City. They kept saying how amazing and humble she was, and that Chef Ruby was really talented with a great story and, she is from Jersey City.

A few weeks later, I came to meet her for a drink and for some lunch. She made me a few of her favorite dishes, and she even gave me a tour of the kitchen. I sort of agreed to come back and actually work with her on a busy night to see what it’s like to be a chef. So stay tuned! 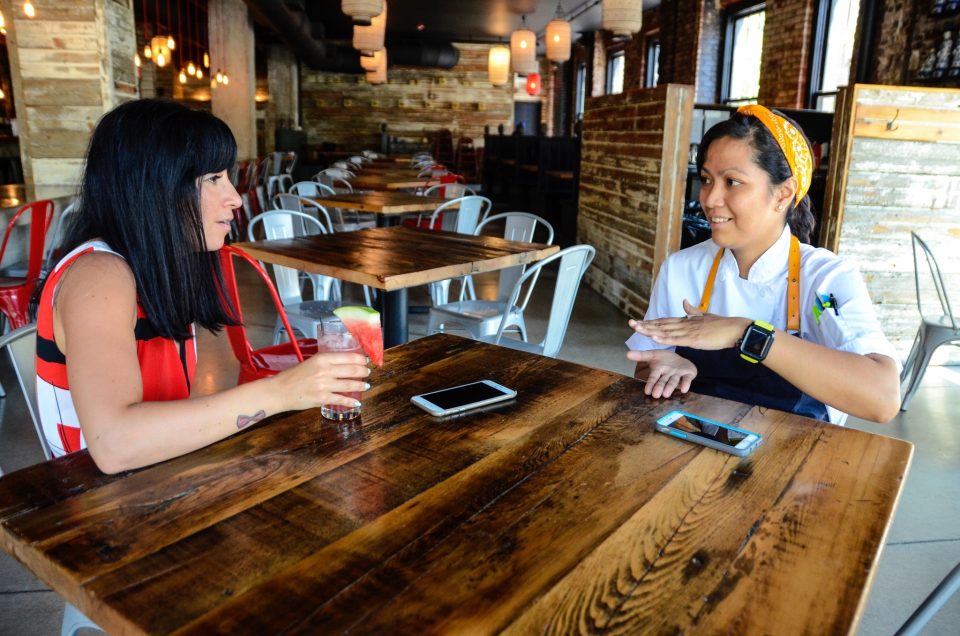 I’m the executive chef at Talde in Jersey City.

How long has it been?

So you’ve been working with Chef Dale?

How has that experience been? 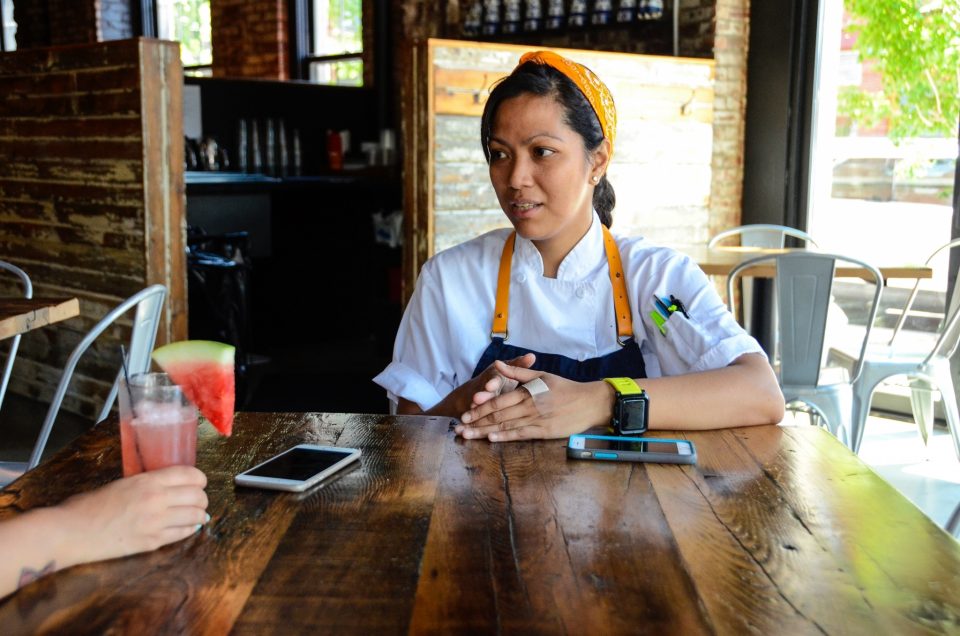 How long have you been a chef?

How did you start?

It started when I gave birth to my now nine-year-old daughter. When she was three, I realized that I had to influence her somehow. That’s what started it all. I was good at cooking, and then it took off.

So you went from just being a home cook to a chef?

Yes, and I just researched the culinary industry. I went to the French Culinary Institute back then. Now it’s ICC, the International Culinary Center. One day, I called for a walk-through of the school. I took the tour; they explained what was behind the scenes and what goes on in the kitchen, and I fell in love with it from there.

You fell in love with being a chef.

Yes! I fell in love with the food, the process, the foundation of it. From then on, I began to really immerse myself into it. 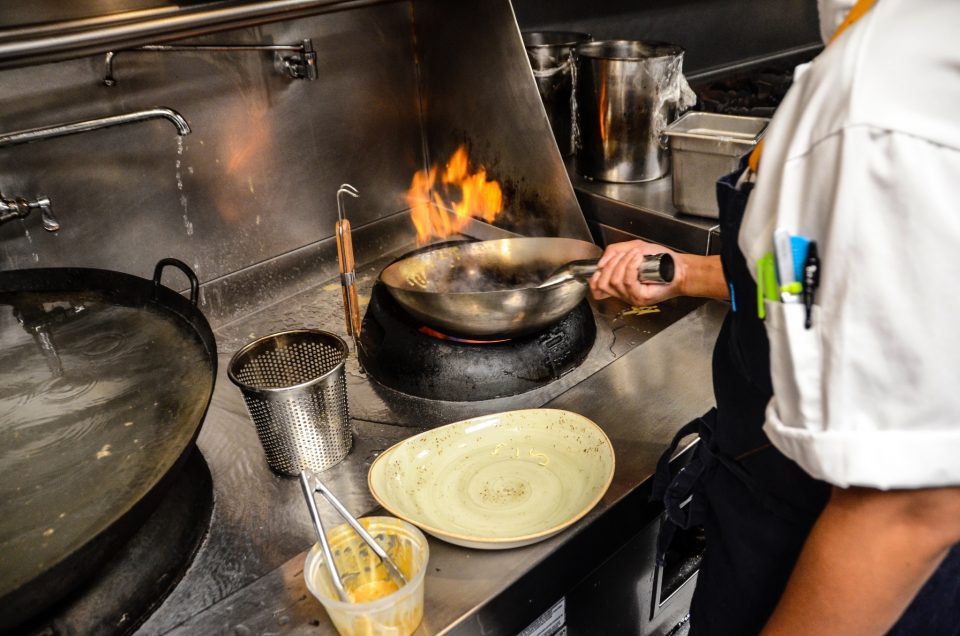 That’s amazing, to go from being a mom and cooking at home to becoming a chef. How is that transition?

It was good. I have a very great support system at home. From the day I told my husband I wanted to be a chef, he gave me this handbook or packet of research to read before entering the industry. He told me there were pros and cons, and after I had read it, I told him this is what I wanted to do and what I wanted my daughter to see from me.

I love that. When I started my blog two years ago, my daughter was about a year and a half old, and I wanted to be a positive influence, to show her you can do things that make you happy. You can go against the grain. 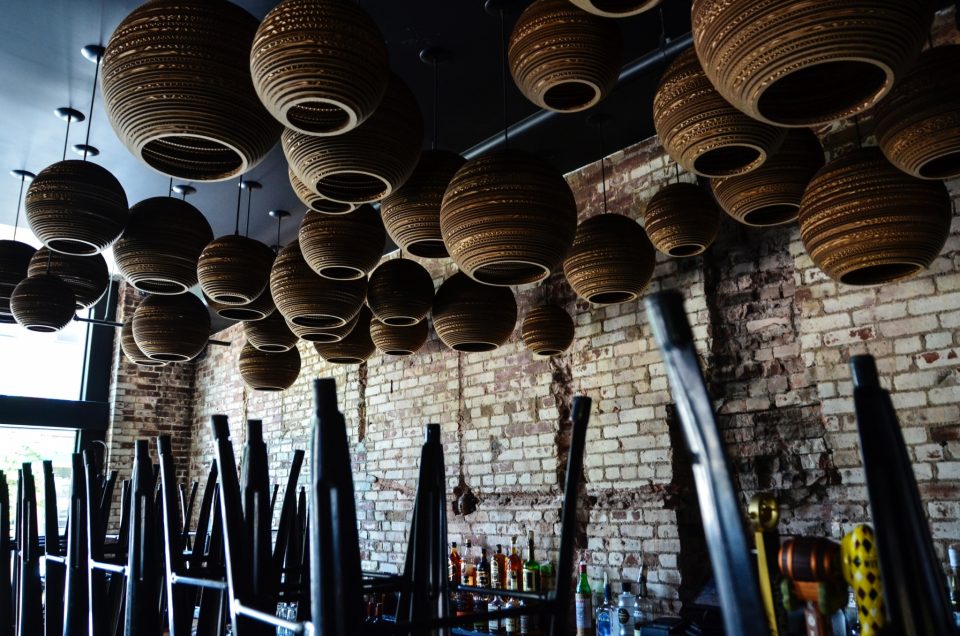 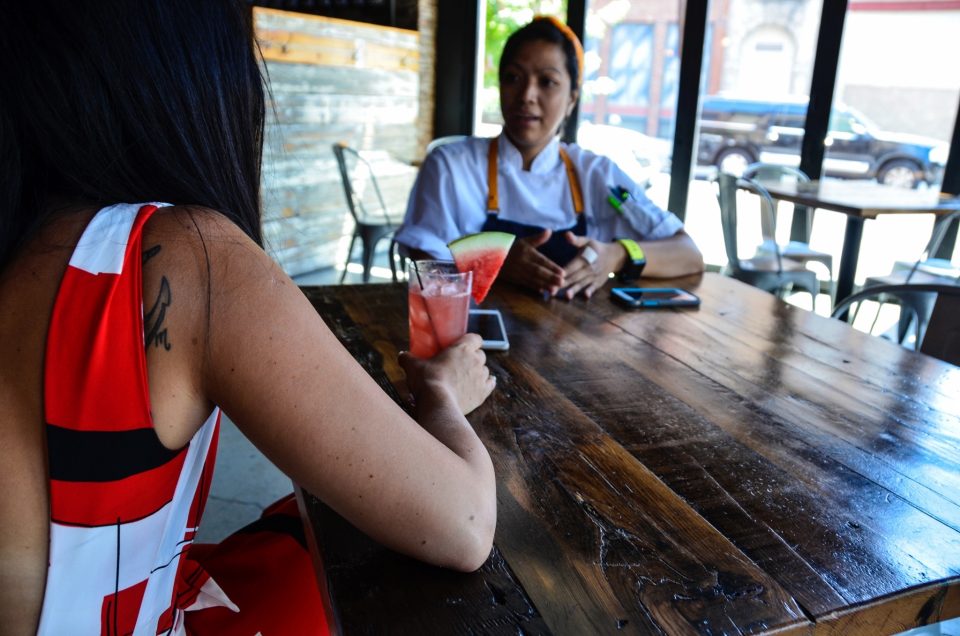 But being a chef is hard, right?

It is. It can be grueling. Sometimes, I just want to give up, but whenever I see someone pushing, it gives me the positive energy to move on.

What do you love the most about being a chef?

When people eat the food or experience the food that you put in front of them, they almost stop to remember what they’re about to eat. It’s inspiring to make that person remember something you made. 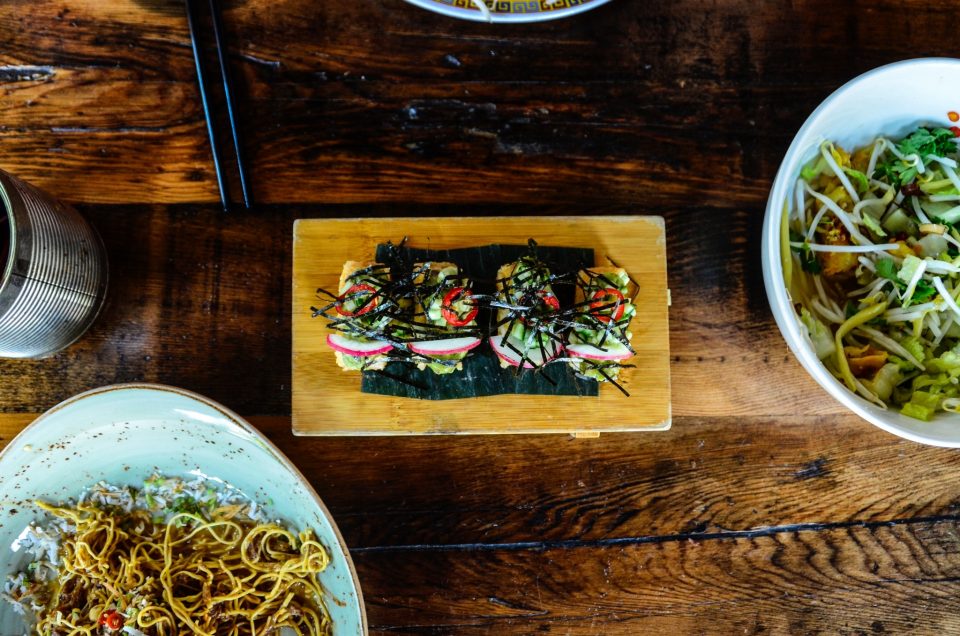 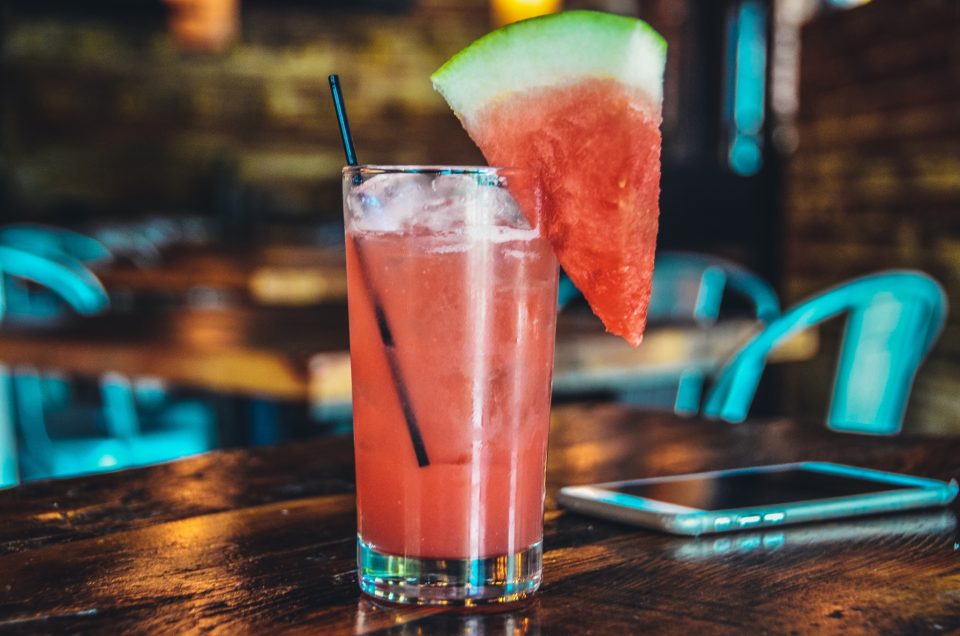 Who/what are your cooking influences? When you were a home cook, what would you cook?

Honestly, I always watched Ina Garten. She’s one of the first influences in my cooking career, and I would always love seeing what she cooks and how she prepares everything. That’s where it all started. What I love the most is mainly making Asian food, which is Talde. 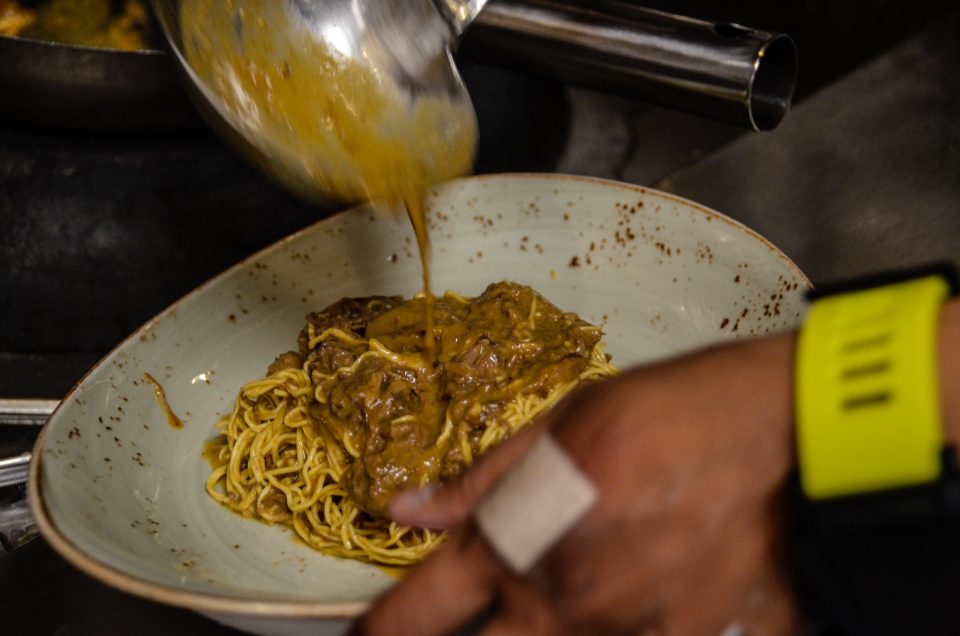 What is your favorite Talde dish that you make or eat?

My favorite is the Kare-Kare. I feel like it represents Chef Dale to the core. It’s Asian-American cuisine, an authentic dish, but it’s very Filipino. It’s a dish that represents him in an innovative way while still being true to his culture. It’s my favorite dish to cook. When I first met Chef Dale and introduced that dish to me and how to pick it up, he told me, “This is not your regular Kare-Kare dish.” It’s his own interpretation of the dish.

Are there any dishes you recommend?

I think the best ones are Banana Blossom Salad and #6 Bao. From my first time eating at Talde in Brooklyn to when I first saw the emblem in Jersey City – a rising Filipino sun, which is inspired by the Philippines’ national flag with the full-risen eight-pointed sun – I wanted to work here and learn how to cook the Whole Roasted Branzino. It’s my favorite right now. It’s awesome, so good.

So what are we trying today?

We’re serving you the Banana Blossom Salad, the Kare-Kare, and the Yuzu Guacamole. Those are the three dishes I think are very complex, but simple at the same time. They stay true to the core. 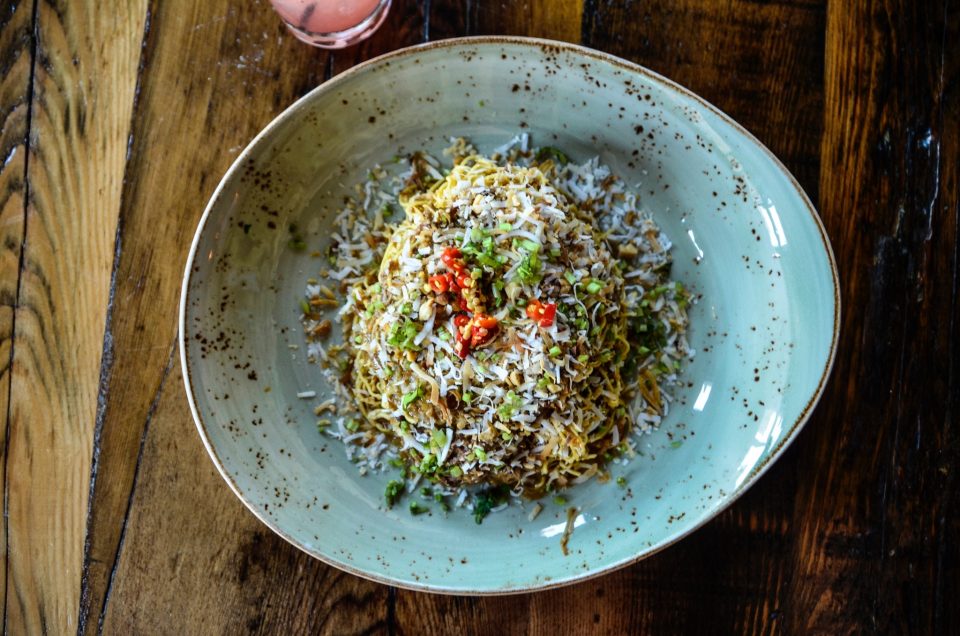 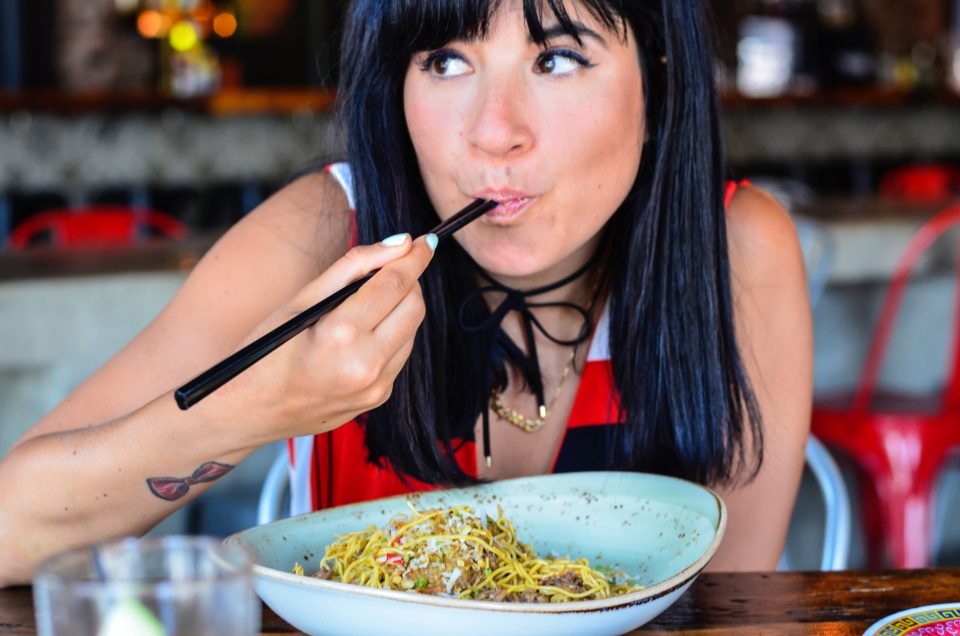 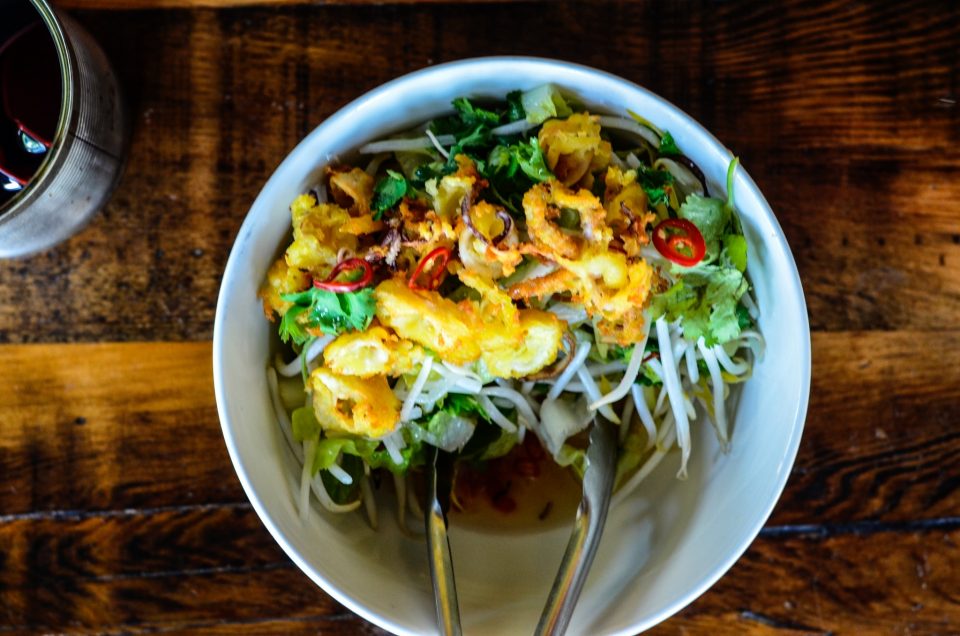 Any funny stories you want to share about Chef Dale? He seems like he’s strict, but he’s goofy.

He’s very goofy! One day, Chef Dale came in here to help during a busy night. One of my cooks posted something on Instagram that we were both exploding that night. Everybody called me, former chefs that I’m still friends with, and said, “Are you okay?” The look we had on Instagram was very serious, and he looked like he was trying to yell at me, but we were just goofing around and talking about food!

He is, and very lovable. He seems strict, but he’s so proud of his career. That’s why I love being here and love working for him.

How is it, being a woman in what feels like a male-dominant world?

I don’t think it’s a big deal, especially since there are a lot of women chefs out now. If I put a label on it, that’s where the problem would start. I feel like I’m the same as anyone else, with the same obstacles as everyone else. 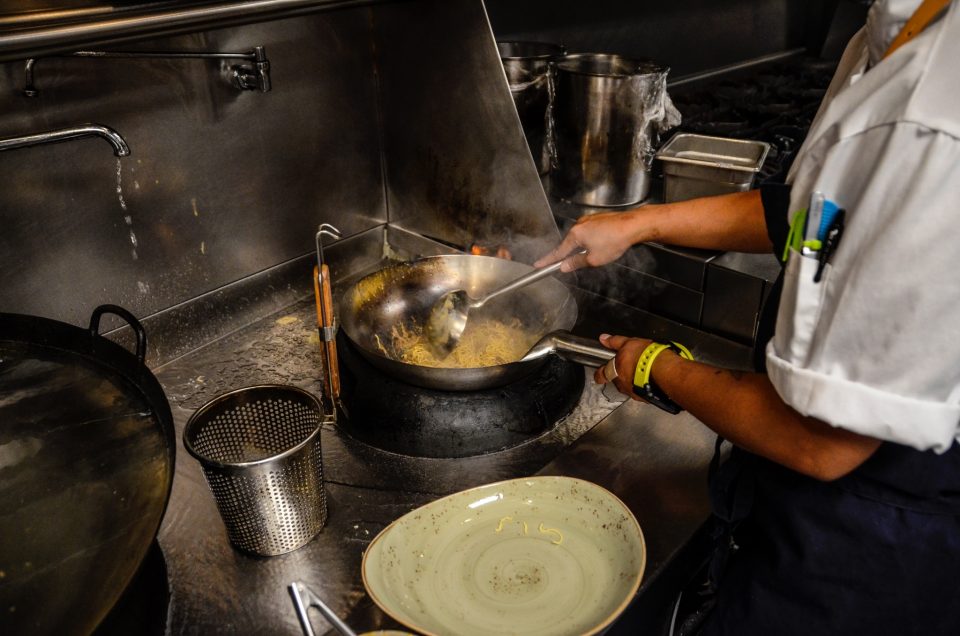 Where do you live now?

I live in Jersey City, right by Mallory.

How long have you been in Jersey City?

Sixteen years, since I came here when I was nineteen.

What is your favorite Jersey City hangout spot, other than Talde?

LITM. I also used to work at a jewelry company behind BJs, and that’s where we all go hang out.

Cool! Is there anything you’d like people to know about you and working with Talde?

Just come and have a great experience. We’re not pretending to be a Filipino restaurant. We’re just staying true to the core Chef Dale had started. Come in and have a fantastic night! 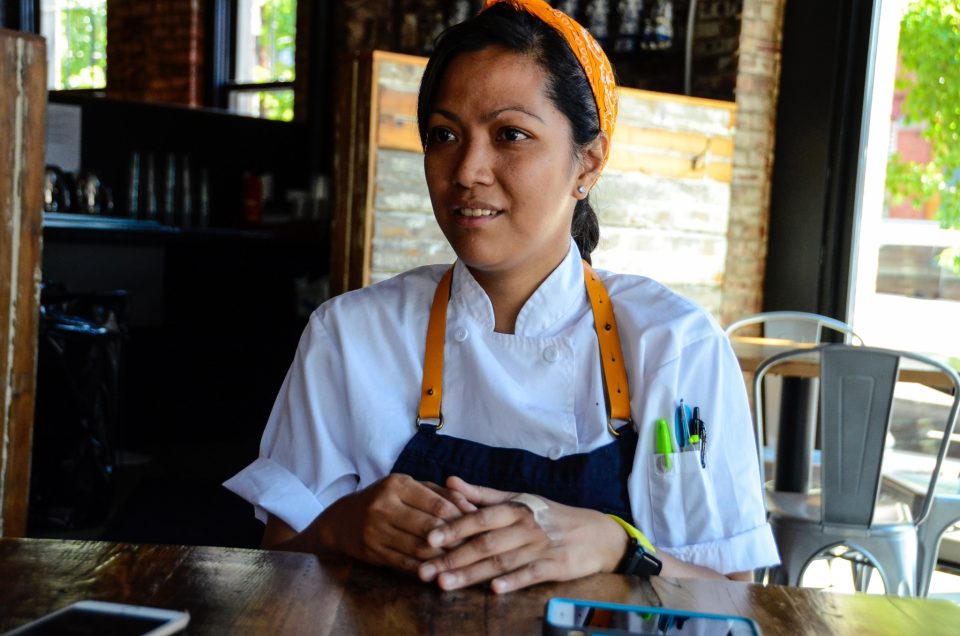