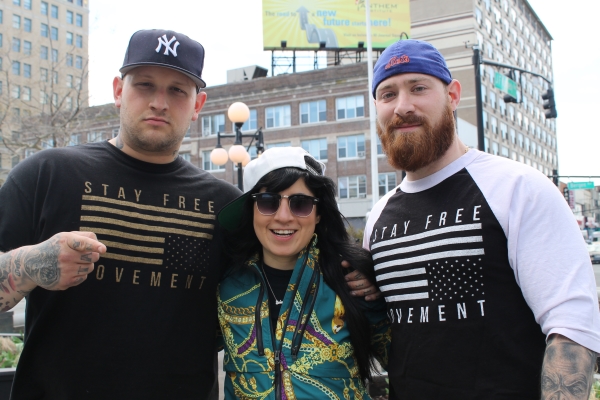 I try to surround myself with positive and outgoing people, which is what Zak, Steve and the Stay Free Movement is all about. I first met Steve at a local charity event “Comics for Cancer” a few months ago, he walked up to me and gave me a huge hug and said “I am a big supporter of everything that you do, keep it up and stay positive”. Since then we’ve been friends. 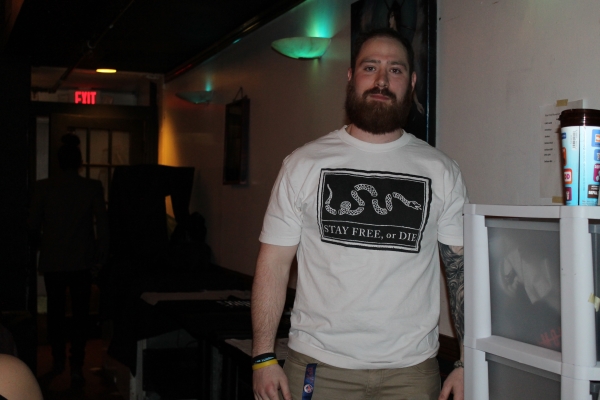 You always catch Steve and Zak doing something positive in the community; giving food and clothing to the less fortunate and organizing events to raise money for many different organizations. The Karma gods love these guys, that’s for sure!

We met for lunch at Diana’s Fried Chicken in McGinley Square and since we had so much food leftover, we packed it up and gave it away to a few people that needed it. Zak and Steve are really good people, and they set such a great example of what paying it forward is all about. 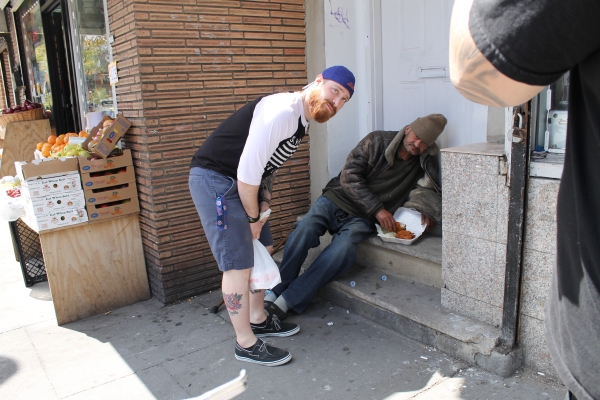 What are your names? Zachariah Ferentz and Steve Donohue.

What do you guys do? (Zak) We run non-profit organization called Stay Free Movement.

What is SFM? (Steve) It’s a non-profit organization that promotes a person’s ability to ‘stay free’ of negativity, whether it be mentally, physically, or spiritually. We strive for to set the example of paying it forward, promoting kindness and being a better person. 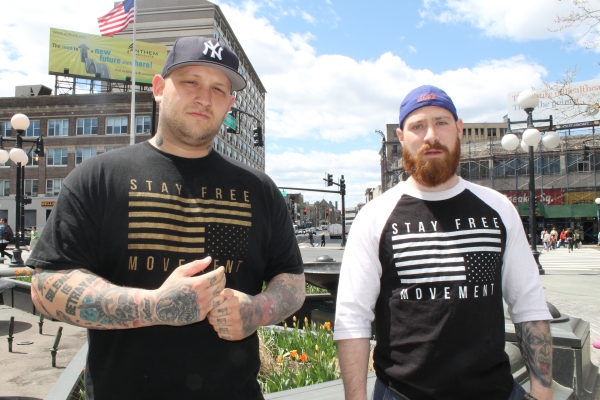 How did it start? (Steve) It started with me and him (Zak). Actually, we got together when I was living in Georgia while I was in the military at the time. He came down with the idea of trying to do something positive for people, I added my ideas and we started doing it… it felt good and we kept it going.

Can you elaborate more on what you do?  (Zak) We raise money through awareness campaigns, attaching ourselves to causes to see them progress, offering merchandise in exchange for their donations, and different events and we correspond with a lot of big companies that come and help. Right now we are working more on helping others in Jersey City whether it’s the homeless or youth programs for kids. Recently, we did a comedy benefit called, ‘Comics for Cancer’ which was an event that we had downtown to raise funds for pediatric cancer research. 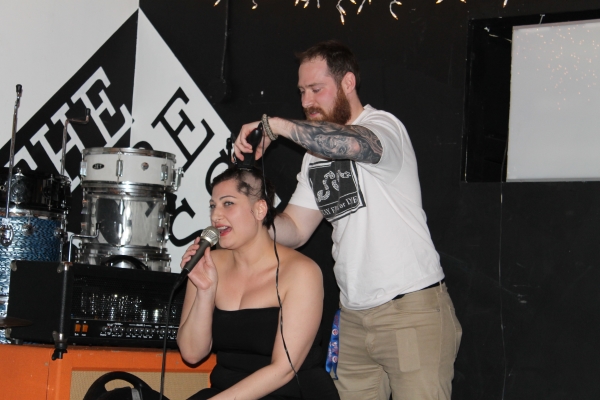 (Steve) Luckily we’ve been able to take Stay Free Movement and go everywhere we planned on the East Coast. We’ve been fortunate enough to receive a positive reception wherever we go which has helped us help causes like veterans, addiction shelters, rape intervention, battered women crisis, suicide prevention, and Autism, just to name a few. We’ve helped out so many different causes… and we did it all with limited resources. We try to get as far as we can with what little we do have. We see it as the people we help don’t have much so what little we do have we can make small miracles happen.

It is a constant struggle to gain the attention and support of people. We focus on being consistent. 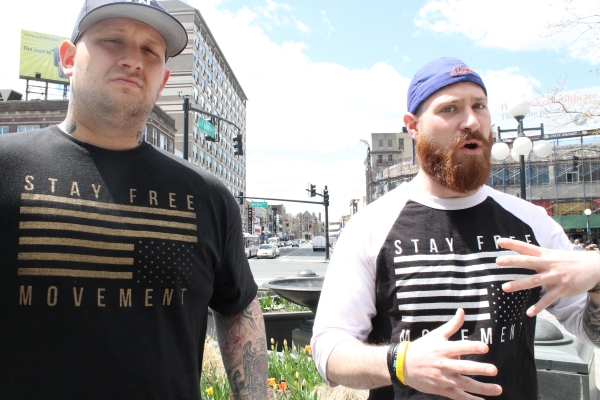 Why? (Zak) Why not? I think that every individual is their own person and they should be able to do whatever they want as long as you’re not harming anyone or harming the environment. I just believe in staying free mentally.

I think everyone should find something that they really want to do, their passion. Mine is music, his (Steve) is helping people, meeting a lot of people. I think that everyone needs to find your inner passion and pursue it. Put 50 hours a week in that and you’ll be successful. Me and him have gotten to a level where it is becoming successful, and we have met with so many big companies and we just got affiliated with Google.

(Steve) It’s crazy to believe its kind of similar to what you’re doing with Chicpea. You have an idea and ambitions. As small as it is to you, you think it’s cool and you like it if someone comes along and they like it too. It’s going to be an infectious positive cancer. People call us saying “what you’re doing is changing my life” and we’re seeing it. 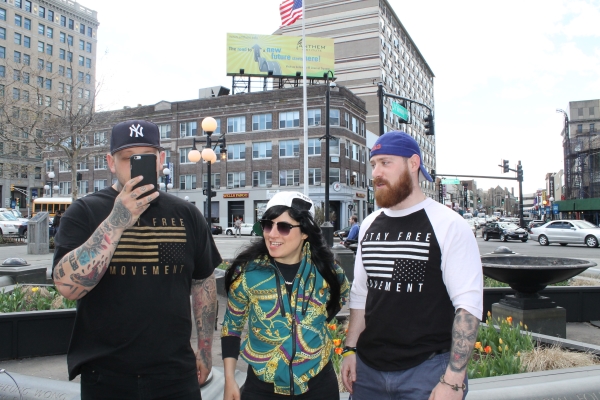 (Steve) He is the girlfriend I don’t fuck!

Haha. (Zak) We’ve been childhood friends, we are attached to the hip….we are always helping each other out.

(Steve) We are two completely different people… but when we see eye to eye it can’t be stopped. We went from having no money, being homeless in a car traveling all around nine states just getting this off the ground in 30 days, when I first came back from the military. We were two homeless dudes in a Nissan Rogue and we were bouncing house to house trying to get established and we did that never looking back. We never missed a bill, the credit is still going up and so is stay free it’s here and that’s because we had to balance our lives and we helped give ourselves that. 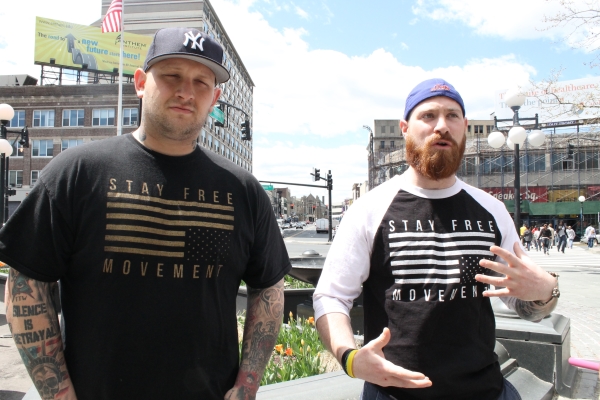 How do you guys pay the bills? Does Stay Free pay the bills? (Zak) Stay Free, no. We generate money to stay free but we give it back, we work individual jobs. I do graphic design and I also do photography and I help people with certain things involving the music industry. He’s the same way, booking events, speaking, school, and whatever he can to generate revenue.

How do you raise money for Stay Free? (Zak) Through donations, which in return you will receive a gift from stay free like a t-shirt, stickers, patches, or War Story Cds. We try to make sure that you do receive something for your generosity and for supporting our dream. We also do events such as Southeast Beast in Florida, we are participating at this year’s Vans Warped Tour and we will be at a festival in Sacramento in August for a different music festival called Weirdo Fest. We set up at different events, spread our message and let people know what projects we are working on. People show the love and we are truly grateful for it.

Do you have any upcoming projects coming up? (Steve) We’ll be doing Groove on Grove, and JC Fridays as a vendor… we will be bringing some music as well, I don’t want to unveil too much but when you come to our tent it will be beneficial to you.

(Zak) It would be beneficial to Jersey City that’s what we want to do with groove on Grove we want to raise money for the youth in Jersey City amongst some other ideas we have in the works. 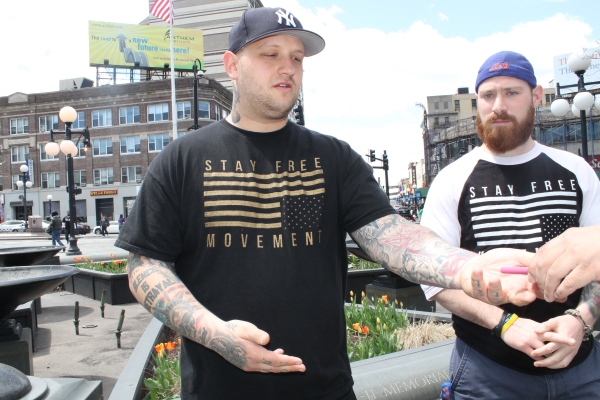 So you guys are from Jersey City?  (Zak) Both born and raised. One in the Hauge and one in Christ. Go figure.

(Steve) It went from being a blue-collar factories to white-collar corporations.

(Zak) I say this in a better sense, the crime is reduced, there were a lot of shootings downtown, heavy drug dealing and gangs, so to clean that off the streets, that’s the most positive thing from gentrification. On the other hand, forcing families out who have been born and raised here..I don’t know, I just want to see everyone happy. Jersey City is a place of unity to me, most of my friends are all different races, I never had a classroom in Jersey City where it was all white kids, or all black kids there was a lot of diversity. 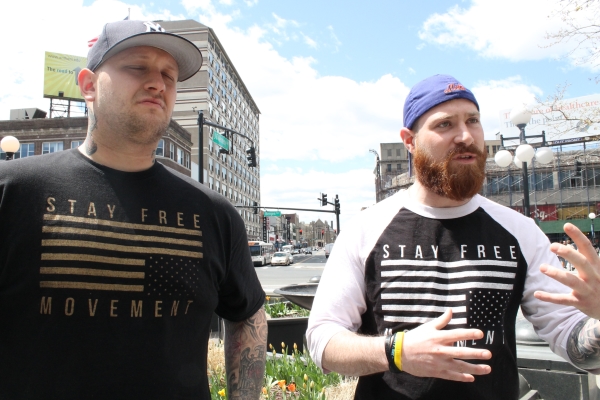 Do you have a favorite Jersey City hangout spot? (Zak)I like going to the Colgate Clock to look at the city and mellow out, for food I go to Gypsy Grill, I’m an advocate for that place, also I like Roman Nose and Skinner’s Loft.

(Steve) I love going to Diana’s, that’s my secret getaway. I’m not a big fancy guy, you’re lucky if I wear underwear (laughs). I like Gia’s on Newark Ave it’s a little spot that I go there to get frozen yogurt. I don’t drink too much but I love Lucky 7’s “you’re dirty but we accept you vibe”….

Anything else you want people to know about State Free? (Steve) We ain’t going nowhere, get used to it.

(Zak) It’s a positive movement and we are open to any suggestions…. and I do want to note this don’t do drugs and weed is not a drug….cause I’ve seen drugs take out my family.

(Steve) Be nice to everyone. Be positive.