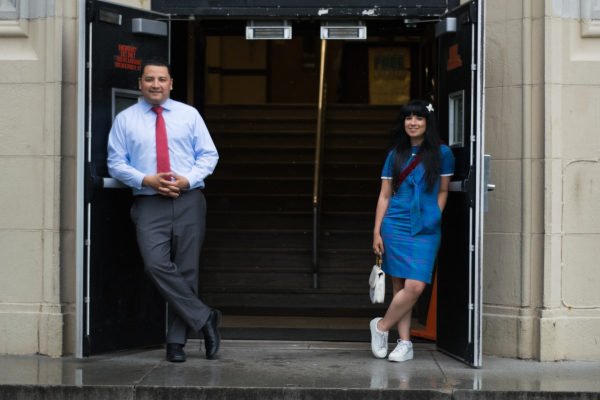 A few weeks ago, at a local restaurant I ran into friend Joel (aka NemoBeatz) and he told me all about his experience as Principal for the day at Public School #22. He wouldn’t stop raving about Oscar (the real principal) and about all the students so I forced Joel to put me in touch so I could see all this for myself.

A week later, Oscar invited me to come tour the school, meet with his the cabinet and he also asked me to talk to a class of 5th Graders about my professional experience. I was humbled. 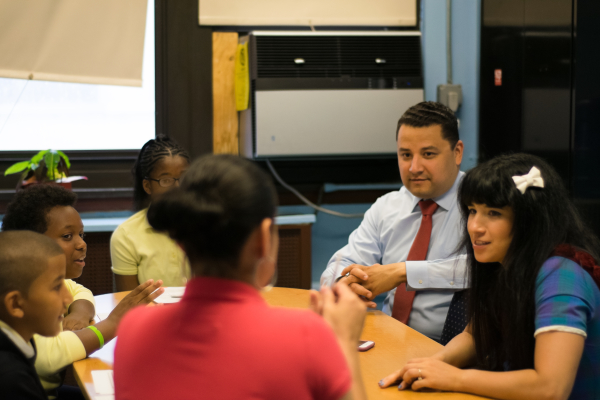 At exactly 9:30 am on Monday morning I went back to school, and straight to the principles office….joining me was friend and photographer, Nabil. I figured since I would be busy asking questions and touring that I needed help on the picture front (he is also awesome).

My day there was so fun, this school is doing so many great things for the students and for the community, it is obvious that the kids who go here are happy kids, it was really a joy to see it.

When Oscar asked me to talk to the class of 5th graders, I was a little apprehensive at first, but as soon as I got up there the questions started flooding in, they asked me everything and anything, we looked at the blog, and I talked about the different people I’ve met, and when they heard I also teach a hip hop class they made me do a little routine! It was hilarious. I had a blast and I can’t wait to go back. I am already planning my “back to school” outfit FYI. 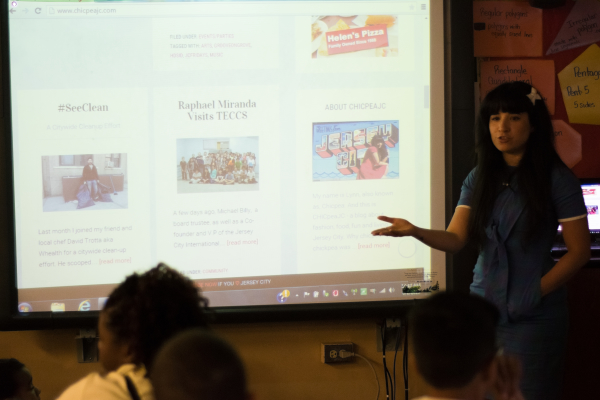 What’s your name? My name is Oscar Velez.

How long have you been principal? In August it’ll be two years. 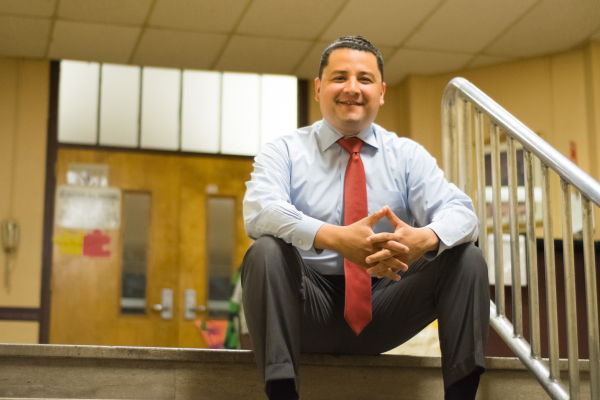 Tell me about you experience being principal. It’s been a ride. It is everything I expected and then some. It is much more rewarding than I could’ve ever imagined. And on my worst day or more stressful day, I still love my job.

Are you from Jersey City? I was born and raised here.

What area do you live in now? I live in the Heights now but I was born in Christ Hospital and I grew up in downtown before the renaissance as I call it. I love Jersey City. My wife and I, we really have settled or kind of come to terms of living in Jersey City for the rest of our lives. 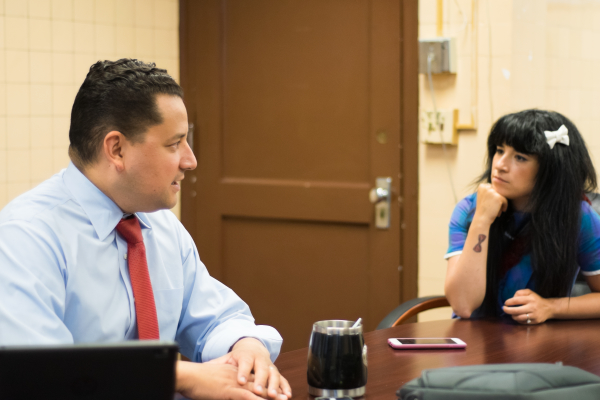 Do you have a favorite Jersey City hangout spot? I’m a big fan of Carrino’s… When the Merchant was open, I was a regular fixture there.

How do you feel about the way Jersey City has changed in the past couple of years? I think it’s phenomenal. I think, as a lifelong resident, my perspective is unique because many of the lifelong residents seem to be uncomfortable with all the changes that are happening. I couldn’t be happier. When I was younger I used to say “I’m from Jersey City,” and you would get kind of that look. No one would make a comment or someone would say “Isn’t it dangerous there?”

Jersey City was always a great place to live, always a great place in terms of diversity and culture. It was a microcosm of what the United States is like, but it always had a sort of stigma. Jersey City’s great. It’s coming up.” That excites me. It’s finally a city that people are stigmatizing less and less for all the wrong reasons that it was done before. I also think it’s great that Jersey City’s a destination place. 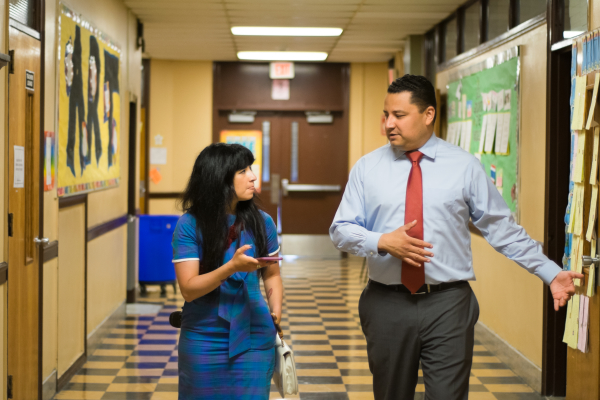 I think #22 school is just a picture of what other schools are like once you get into the door and beyond that fear of “Oh my goodness it’s a public school,” and the Jersey City public schools [have] a certain reputation and it can be hyped in the media, but interview likes this and your time here and we have parents from all walks of life, getting the same treatment that you got. 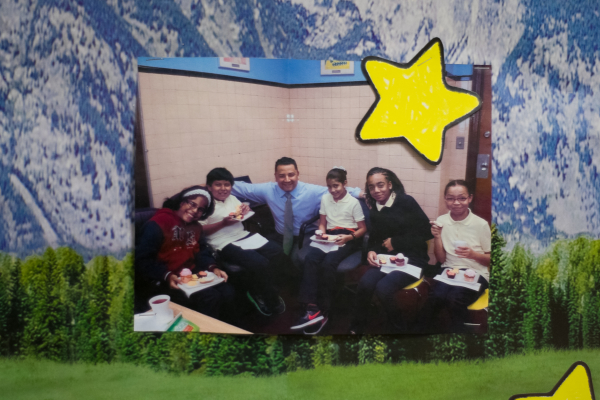 If we’re going to build sustainable change we have to invest in the schools and also in the students that we’re servicing.

Anything else you want people to know about P.S. #22? We were the first Stop the Drop school in the city so we partnered with City Hall, you can see the sign outside at the main entrance. Our students have pledged to keep up with the park across the street and we have the scoopers and the brooms and they’re helping keep the park clean. We believe that’s a very important part of civic responsibility. 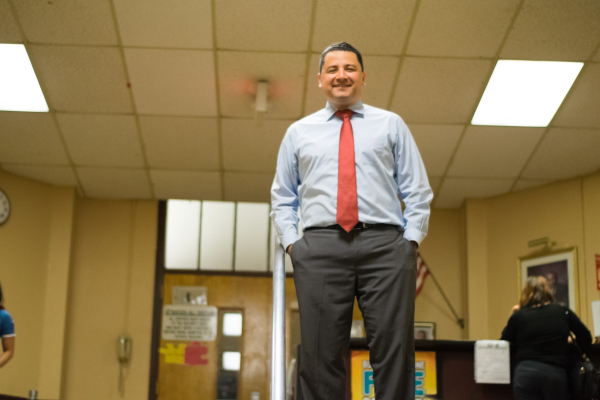 We also had a book drive last year to put baskets of books in businesses. It was called The Summer Reading campaign, if we put books in the hands of kids where they are, they’re more likely to read and that’s one of the things we want to do is foster a love of reading not just actual reading. 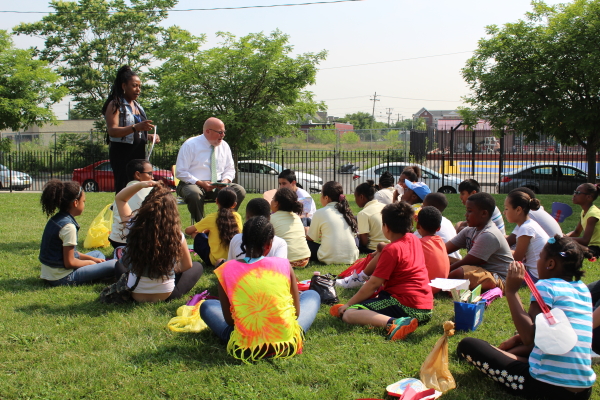 So we had over forty businesses have baskets of books and we raised over 2,000 books and we had a big kick off and a lot of community members including the mayor… so we bought ten libraries made of wood and they will become permanent fixtures in the neighborhood in the partnership with the city and the DPW. 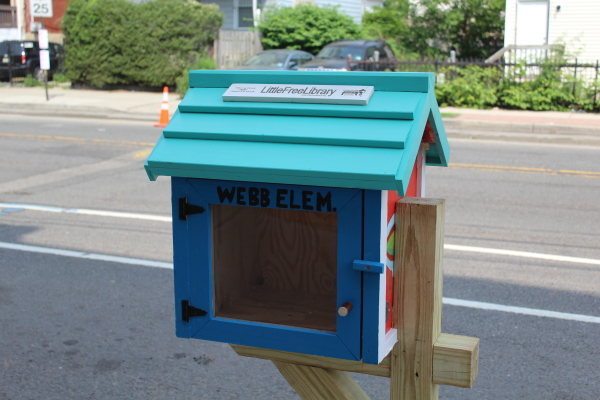 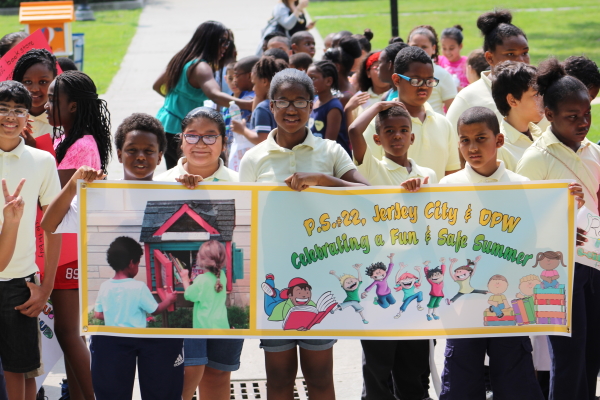 We have four major parent events at night where kids and parents learn together. We have a STEM night for Science, Technology, Engineering, and Mathematics. We have a Reading Night under the Stars where kids dress up in their pajamas and come and drink cocoa and they’re read to. We’ve had Monster Math night where they play interactive games in Halloween costumes. But all of that is so parents can learn with the kids alongside with the teacher and so what happens is we’ve literally gone from minimal parental participation in two years to averaging two to three hundred parents a night at these events and we’re increasing that. 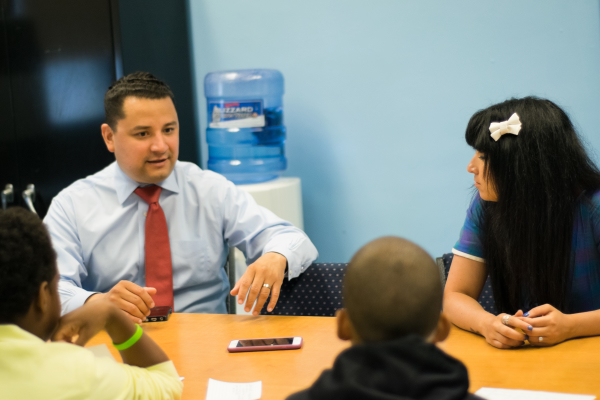 One thing we can’t emphasize enough is the belief that the walls need to be broken down, there can’t be any barriers between us and the community and the parents and the families. That cliché, “It takes a village,” it’s not an exaggeration. 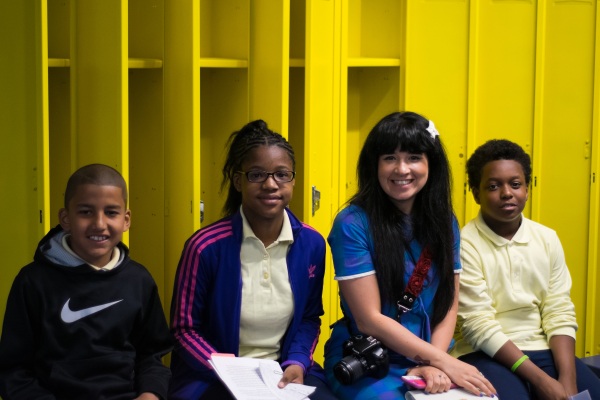 Jeremy Ferral, corporation’s counselor ran one campaign, Muhammed Akhil, the former chief of staff, ran another campaign, and Brian Platt, who’s now a director in the mayor’s office, ran another campaign. It became a very competitive season of two weeks of campaigning, and posters, and flyers, and special events on school days, endorsements came from elected officials, and food came and it really felt like a Hudson County election.

We had a good election, the election lead to some campaign promises, but the students and the staff worked really hard to make sure that those promises were fulfilled. 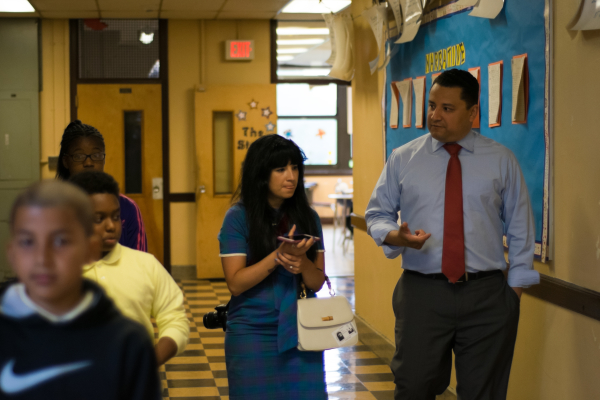 One of the things that we will remember from this is that the voice of children is a powerful thing and it’s much harder to say no to a child than to an adult… you’re going to see how powerful that change has become just within a short amount of time.

What are your names and what do you do?

My name is Darryl McKantz, I’m deputy mayor of classroom 323.

Mrs. Solivan and I am one of the 5th grade teachers. 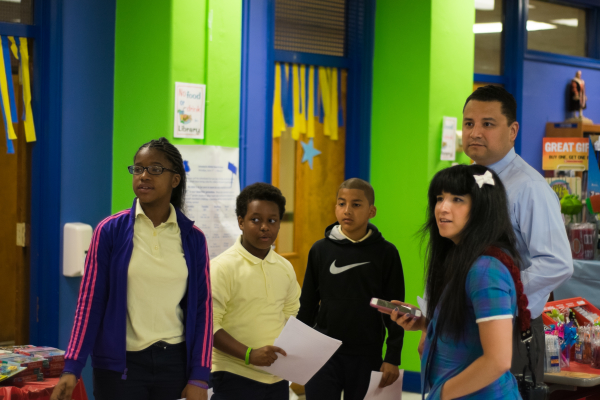 So what do you guys do?

Darryl: I worked on the pool. It was not available for a long time and then we finally got it fixed.

Amirah: It was like a cabinet, we had made like a kid version of it with like so many kids from 5th grade. Each person had their own jobs and so we had to make a PowerPoint for Dr. Lyles, who is the superintendent. And then we had to give a tour of things we wanted to be fixed in our school for Mr. O’Reilly, he is in charge of the building maintenance and stuff. 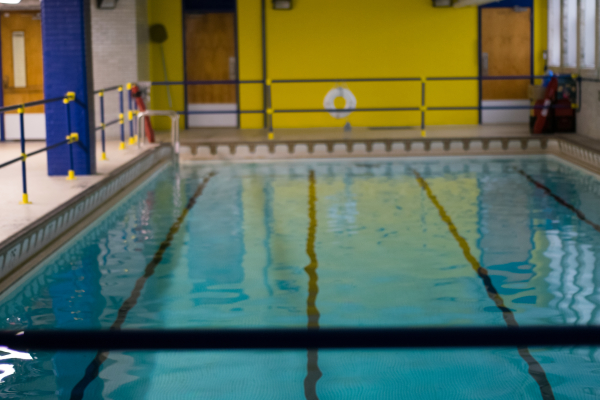 What are requests that you get a lot?

Amirah: Taco Tuesday… Because these are some of the things that I promised during the election. So like half of this stuff I didn’t even come up with, like my class [came] up with it. 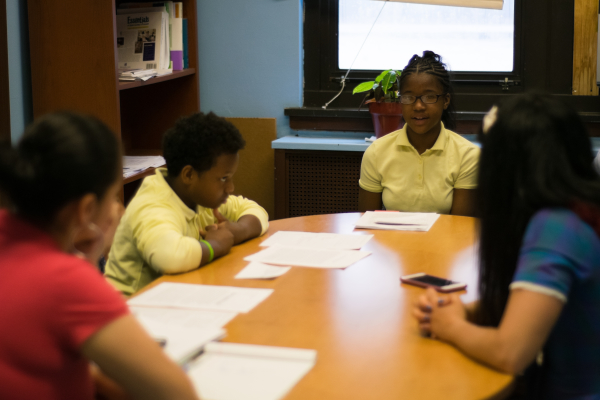 What other stuff did you guys get to change in the school?

Darryl: The bathroom. We came up with kid friendly colors in the bathroom and just a little fixing in there. I don’t know if it was like pipes or anything, but the bathroom was great. And also the cafeteria, we had some pipes down there that needed fixing and we got it done.

So what have you been up to?

Christopher: First, we wanted more fieldtrips for the 5th grade ‘cause this was going to be our last year and it actually had been working. Last week we went on a cruise and it was very fun for us ‘cause this is our last year.

Do you guys want to be in politics? 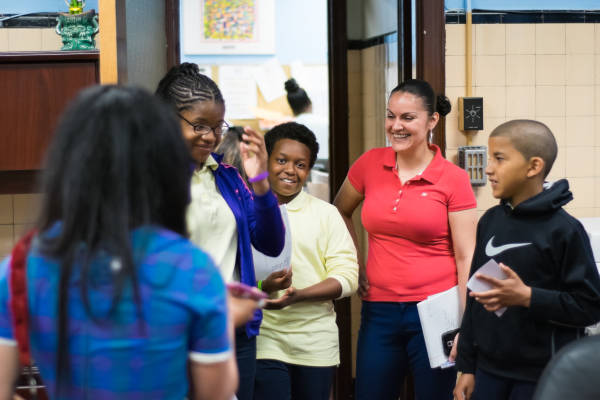 What do you guys want to be when you grow up?

Darryl: I want to be a basketball player.

So who’s going to replaces these guys?

Velez: The day after the election, this is how competitive it got. Those three gentlemen from city hall who helped the campaign already started looking at 4th graders seeing who potentially could be the people they sponsor next year to run because it became that competitive.

Solivan: It was supposed to be a very small, teachers, we discussed it amongst ourselves and we were going to have a small election for J.A. Biztown. That was the goal but then, which was a great experience, it kind of spiraled and just turned into a whole school wide [experience]. 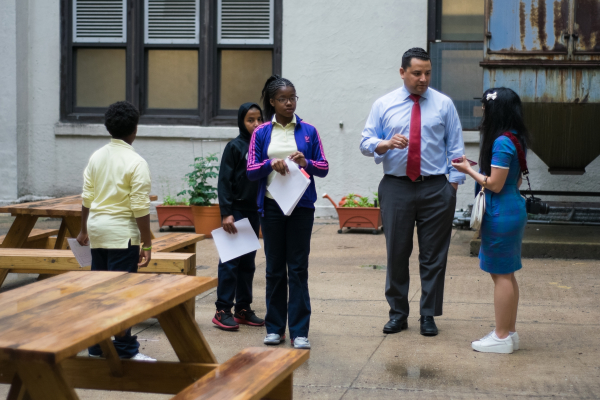 Velez: It was so interesting that the mayor would phone in to his staffers here to figure out who was winning that day. Until Election Day he was the one calling like “Who won? Who won?” He even emailed me jokingly and said, “I can’t get any work done here ‘cause everyone is working on the campaign at P.S. 22.”

Velez: Where else did you guys get to go and where did you get a tour of and what did you do? 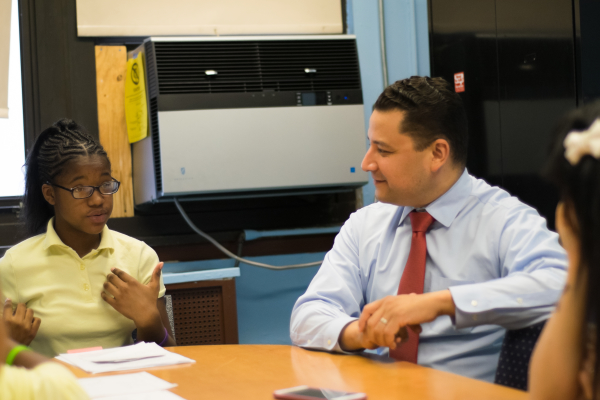 Amirah: We had went to City Hall. Us three had to give a speech telling them what we are doing in our school and what we are trying to get. [I] was nervous ‘cause when you were doing the speech you could see your face up there.

Velez: And they received a proclamation from the city and then they also got a tour of City Hall and went to the mayor’s office to hang out.

Amirah: He let me sit in the seat, like the big mayor’s seat. 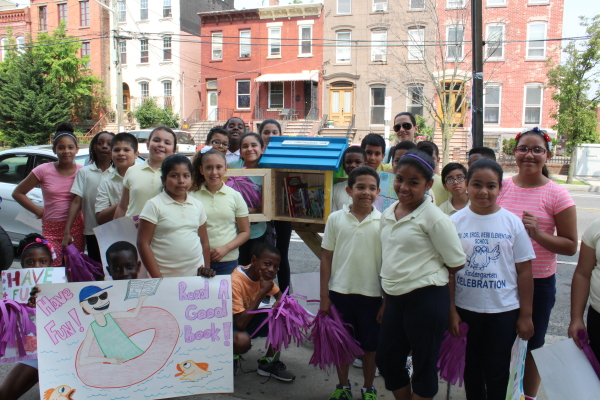 Velez: They sat in Steven’s seat so we tweeted it and the mayor replied to the tweet that “You earned that seat.”